A pensioner and his wife carried out a suicide pact after becoming overwhelmed in their fight to stop travellers setting up camp next to their idyllic country retirement cottage.

An inquest has heard how John Knott of Bosbury, Herefordshire confided in friends, “I’m at the end of my tether,” soon before making a suicide pact with his wife and ending both of their lives in his workshop in August last year.

The inquest was told Mr Knott kept a three-inch thick file in his study detailing his battle against the proposed travellers’ site.

Detective Sergeant Tim Powell of Hereford CID said: “It was clearly a concern to him.

“He had clearly set out his objections and got local people in the village to join him. The couple lived in an idyllic cottage next to a small field where planning permission was put in for living quarters for a family.

“He put together a very professional and comprehensive argument against the plans for a washroom, outhouses and three caravans.”

John had been a director for a construction firm, where he had worked and saved for years for the privilege of living in the £350,000 cottage in an unspoiled location. His wife’s care was putting him under increasing financial strain and the planned camp would have severely de-valued his property.

Conservative MPs have been fighting since 2013 to remove special privileges for gypsies and travellers in the planning system and eradicate clauses demanding local authorities set targets for new camps in rural areas. 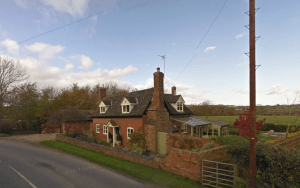 The house John Knott shared with his wife.

Mr. Knott, 71, had become distraught after fighting the drawn-out legal battle to halt plans to house three caravans and a washroom on a rolling green paddock adjacent to his oak-beamed cottage. The wider village community shared his alarm about the spoilt landscape.

He had been married to his wife, Anne, for 38 years and they had lived in the cottage for eight years. John was the village churchwarden and the couple were active in village social live until his wife’s Alzheimer’s and asthma worsened.

Prior to their deaths, they had not been seen in public for 18 months. When Anne was admitted into a care home, Mr. Knott could not bear to be without her and chose to take her back to the cottage where they could be together and he could care for her himself.

In a letter to the planning office sent just six weeks before his death, he wrote: “There are at least eight settled (gypsy) families within a one mile radius of the proposed site, the area cannot sustain any more.”

“There is absolutely no place for a caravan site in this area… Clearly if the drainage were to be as set out in the proposed plans then grey water and effluent would be flowing into the surrounding properties, into the natural drainage routes and into the ponds in the woods which are home to many breeds of wildlife and must be preserved.

“This is dangerous to human health and to the surrounding nature that has to date flourished in this area.”

Mr. Knott did have support in his fight although he may not have known it.

Conservative MP (tipped as next to defect to UKIP) of Kettering, Philip Hollobone, citing the unfairness of special planning concessions for individual groups, called on the Government in 2013 to accept his private member’s bill called “Gypsies and Travellers (The Same Planning rules as Everyone Else) Bill.”

People calling themselves travellers are known to be exceptionally skilled at getting around the law and avoiding prosecution. But there is also a litany of unfair planning regulations which Hollobone wants to change, the majority of which can be found in a document entitled “Planning policy for traveller sites”, which was revised in 2012 by a Lib-Dem minister.

The document claims: “The Government’s overarching aim is to ensure fair and equal treatment for travellers.” But then states that planning authorities must treat people calling themselves travellers differently, by, “facilitate[ing the] nomadic way of life of travellers.”

Local authorities are obliged to “set pitch targets for gypsies and travellers… and travelling showpeople which address the likely permanent and transit site accommodation needs of travellers in their area”.

The document claims this will “reduce tensions between settled and traveller communities in plan-making and planning decisions.” Yet in the experience of Mr. Knott and many others, the policies seem to have done the opposite.

Philip Hollobone argues, “Why should one category of person be treated differently from anyone else under the planning regulations?

“If one of my constituents from the settled community wanted to establish a mobile home in the middle of a green field in the open countryside, they would not be allowed to do so. However, if a Gypsy, Traveller or travelling showperson—the other term used in the planning documentation—wanted to do so, that would be permissible.”