The National Secular Society has said that the Catholic Church’s teaching on contraception is causing “unsustainable population growth”, which is the “largest single factor driving the destruction of the planet”.

The criticism came as a Catholic campaign group launched an initiative to encourage believers to pray for the planet called ‘Care4Creation Month’.

The Global Catholic Climate Movement, which has recently completed a Lenten Fast for Climate Justice, is urging fellow believers to join with Pope Francis in his ‘prayer intentions’ throughout the month of April.

The group say the campaign, a first of its kind, has been inspired by Pope Francis’s call “That people may learn to respect creation and care for it as a gift of God.” 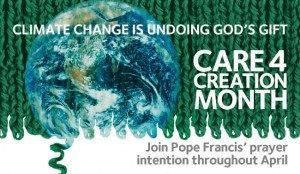 But Keith Porteouswood, the National Secular Society’s (NSS) executive director, told Breitbart London, “The church abuses its position at the UN to obstruct contraception, the best way of mitigating this threat [of climate change].”

“Encouraging contraception would also reduce disease, maternal mortality and child poverty. It is shameful that this admirable initiative is so blindly and dogmatically undermined by a refusal to acknowledge this obvious reality.”

“We agree with the Pope that over consumption in the developed world needs to be curbed. But we also think that unrestrained population growth in the developing world is an equally pressing problem. In this respect, the Catholic church, with its restrictions on birth control, is one of the greatest threats to effort to protect the environment.”

He was backed by the NSS President Terry Sanderson, who said the “initiative was hobbled from the start by church dogma on family planning.”

The poster for the campaign is meant to be a “thought provoking poster visual that shows the world unravelling before our eyes.”

They plan to provide a “range of stimulating online and offline resources” to make it easier for religious communities to pray for the environment together as they “countdown to the United Nations Climate Change Conference (COP21).”

The resources include posters, liturgical aids, daily meditations, social media assets and the first call to action of its kind to sign the online petition to “urge our political leaders to commit to ambitious climate action and solve this urgent crisis, with the goal of keeping the global temperature increase below 1.5 degree Celsius relative to pre-industrial levels.”

“This campaign and the growing momentum within the church is based on Saint John Paul II’s call for an ‘ecological conversion’,” the group said.

Bill Patenaude, a founding member of the Global Catholic Climate Movement commented “we eagerly join our voices to Pope Francis’s prayer intention for April. And we ask others to join us. And given that issues like climate change can cause division, we especially pray for unity within the Church and a willingness to act.”