Lauded Swiss-French designer Le Corbusier has been outed as a “very clear”, “out-and-out Fascist” who wrote hateful articles about Jews and praised Nazi leader Adolph Hitler for his “great work” in Europe. 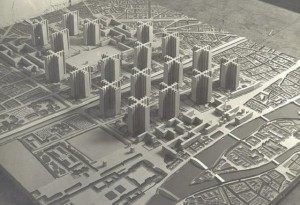 An unrealised scheme by Le Corbusier which would have demolished much of old Paris including, conveniently, the entire Jewish quarter, is shown in an architect’s model.

One of the most prominent architects of the postwar world, Le Corbusier inspired the wholesale demolition of inner cities to build concrete tower blocks, but continues to be revered and respected by town planners and architects, who admire his authoritarian plans and grand schemes. Today he has been revealed as a crypto-fascist, who despite efforts to hide his politics was an active part of the French fascist Vichy government.

The revelation comes in two new books, Xavier de Jarcy’s Le Corbusier, un fascisme francais (Albin Michel, 2015), and Francois Chaslin’s Un Corbusier (Seuil, 2015), released as a major retrospective of his work goes on display in Paris, which has been accused of “white-washing” the embarrassing political history of the celebrated architect and designer. The news, long hinted at but never before conclusively proven, could also be embarrassing in his native Switzerland, where his face graces the ten Franc note.

Responsible for the bleak Modernist style that continues to blight many contemporary cities, Corbusier’s theories on architecture and town planning directly influenced some of the worst decisions made by governments in postwar Europe. 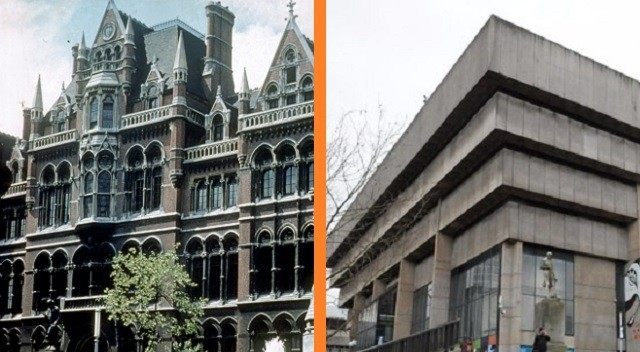 In Birmingham, UK, a number of buildings were demolished to build the Modernist, Corbusier-inspired Central Library, right

Although Le Corbusier never designed a building in Britain, his influence was felt strongly, as this theories were taught, unquestioned, in British universities, which led to the mass demolitions in cities like London and Birmingham of the mid 20th century. One such development was the creation of the Brutalist inverted-pyramid Birmingham central library, itself under the process of demolition after failing to fulfil its own purpose after less than 50 years.

The development required the destruction of a host of fine neo-Gothic Victorian buildings including the city library and Mason College, which claimed among its alumni two prime ministers and a Nobel prize winner.

Abroad, his work included the Unite D’Habitation, a “machine for living” which rejected the idea of streets, gardens, and communities in favour of high-rise building and vast, windswept spaces surrounding them. Though a total failure, it was the inspiration for decades of high-rise towers around the world. Far from the sustainable brick homes they replaced, the tower-blocks became a by-word for crime and deprivation as their designs drove antisocial behaviour and caused isolation.

In Britain the obsession of powerful planners ran unchallenged until those being planned for realised what was being taken away. The architectural preservation movement as we understand it today was created among the backlash against the demolition of London’s Euston station for replacement with a Modernist, concrete box in 1961.

Although the Euston project went ahead, and one of the greatest examples of English industrial architecture was lost forever, popular outrage did prevent a number of other projects from going ahead, including the Corbusier-esque concrete and high-rise redevelopment of Soho, Picadilly Circus, Covent Garden and Whitehall.