The leaders of the three major parties were in Leeds to face a grilling from the BBC Question Time audience in their final set piece appearance of the general election. David Cameron, Ed Miliband and Nick Clegg were led out one by one to answer questions under the stewardship of David Dimbleby.

Each leader was quizzed on their record in a debate that focused on trust. In the case of David Cameron there was talk of the leak from Danny Alexander today suggesting the Conservatives wanted to cut £8bn from Child Benefit. 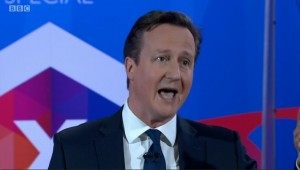 The Prime Minister admitted the plan had been put together at the time but said he rejected it. He confirmed: “I reject it again today”. He then took the opportunity to wave around the letter the Labour Chief Secretary, Liam Byrne, left in the Treasury. The now familiar missive read: “There is no money left” and “good luck”.

Ed Miliband was questioned on zero hour contracts by a small businessman who said a ban would make it impossible for him to expand his business. The leader of the opposition was also asked whether the last Labour government spent too much. His claim it had not led to gasps from the audience.

The opposition leader also took the opportunity to rule out a deal with the Scottish National Party in the strongest terms yet. Mr Miliband said: “I’m not gonna’ have a Labour government if it means deals and coalitions with the Labour government.”

His comments were widely taken as a response to the fears of English voters that he may use the SNP to prop up his premiership. Fear of the coalition has brought in significant support for the Conservatives in recent weeks.

Miliband also defended his decision to deny the British people a referendum on Europe. He admitted a referendum was popular but said: “One of the things about leadership is you don’t always do what polls tell you to. You do what’s best for the country”.

The Labour leader also produced the most Tweeted about moment when he almost fell off stage.

As expected Nick Clegg was asked about his failure to keep his promise to abolish Tuition Fees. But the Liberal Democrat leader said he wanted voters to remember “the other policies” his party had put through in government.

He pushed hard on the suggestion that neither major party would win and claimed the election was really about who was going into coalition with either Miliband or Cameron. He claimed there was a risk from both UKIP and the “swivel-eyed loons of the Conservative right”.

Clegg said he would offer a coalition with the party that got the most votes and MPs. He said: “I will never apologise, whatever short term effects on Lib Dems, for stepping up to plate to put country before party.”

Immediately after the debate finished a poll for the Guardian and ICM suggested David Cameron had won. He scored 44 per cent, with Ed Miliband on 38 per cent and Nick Clegg trailing on 19 percent. The audience won plenty of plaudits too for its pointed questions.

After the debate, the UKIP Deputy Leader said Paul Nuttall MEP complained that Nigel Farage had not been allowed into the debate. He said: “What you heard really was the same old tired Westminster politics advocating the same social democratic policies.

“If Nigel had been there tonight he’d have told the audience that we are the only party that wants to sort out immigration, take the lowest paid out of tax and are presenting a fully costed manifesto. The BBC showed it was made of jelly by letting Cameron wriggle out of facing UKIP.”