Right in the heart of Europe lies a small village where the black flag of Islamic State (IS) flies proudly. Recent reports suggest Jihadis are buying up land and training there, sparking fears it could provide a base to launch attacks across the continent.

The small Bosnia settlement has been a stronghold of Wahhabist extremism since the 1990s, and residents have already been charged with terror attacks and recruiting for IS.

Nestled on a strategically situated hill and surround by dense forest in the mountainous north-east of Bosnia and Herzegovina, sits the village of Gornja Maoča. It is gaining a reputation as an extremist stronghold and a perfect stop off between the West and IS, in a nation that is 45 per cent Muslim and hosting the only Muslim majority capital city on the continent, Sarajevo.

The country was converted to Islam by Ottomans hordes, but radical Islam was negligible before the 1992-5 Balkans conflict. During and after the war, however, Saudi money and influence began to flow freely into the nation.

The war pitched Christians against Muslims and wealthy gulf states used the episode to extend their political influence in this Muslim region of Europe under the guise of humanitarian aid. 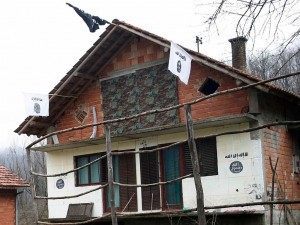 An ISIS bunkhouse in Europe / Reuters

After the war, Gornja Maoča was resettled by radical Wahhabists and has been a cause of concern for the authorities every since. Many police raids in search of guns and evidence of terrorist activity followed, including one involving 600 officers in 2010. Another was completed just five months ago.

Little or nothing was found at first and villagers and rights groups repeatedly accused the authorities of harassment. Then, in October 2011, a young man from the village attacked the U.S. Embassy in Sarajevo with a machine gun attack

Already, 330 Bosnians, mainly from rural areas, are thought to have joined IS in Syria, according to the International Centre for the Study of Radicalisation at King’s College. The first reports of the black flag of IS flying over the village emerged at the beginning of the year. On February 11th, it was reported that four men from the surrounding area had been arrested, and one charged, suspected of recruiting fighters for IS in Syria and Iraq.

A number of high-profile IS members are said to be buying up land and properties in the area, and at least 12 jihadis trained in near-by Osve have travelled to Syria in recent months. Five are reported to have been killed.

Ismar Hadrović, a Salafist who led an attack on Sarajevo’s Queer Festival in 2008, has bought property there, Federalna Televizija reports. Wahhabi preacher Harun Mehicevic, considered one of Australia’s most dangerous men, who moved to Melbourne to escape the Balkan war, also owns land in Gornja Maoca, The Age of Melbourne reports.

Journalists from the Sunday Mirror travelled to the secretive village last week where they saw women in burqas and men in Islamic dress. One local resident told them: “We regularly hear gunshots coming from the woods up there for long periods at a time. It happens every week,” he said, referring to two houses on a hill. “I don’t know what they are doing, whether it is target practice or something like that, but it happens regularly.”