Conservative Party MEP and leader of the Alliance of Conservatives and Reformists in the European Parliament Daniel Hannan has taken to Twitter to attack U.S. presidential candidate Donald Trump, despite the billionaire carrying huge swathes of the Republican conservative base in the latest opinion polls.

Mr Hannan – who often visits Washington, D.C. as an unofficial ambassador for the “right” of Britain’s increasingly left-leaning Conservative Party – asked a question of his followers, juxtaposing Trump’s popularity with that of Labour Party leadership contender and hardline socialist Jeremy Corbyn.

He tweeted, “I just about get the appeal of @jeremycorbyn – decent, honest chap, if mostly wrong. But Donald Trump? Can someone help me out here?” 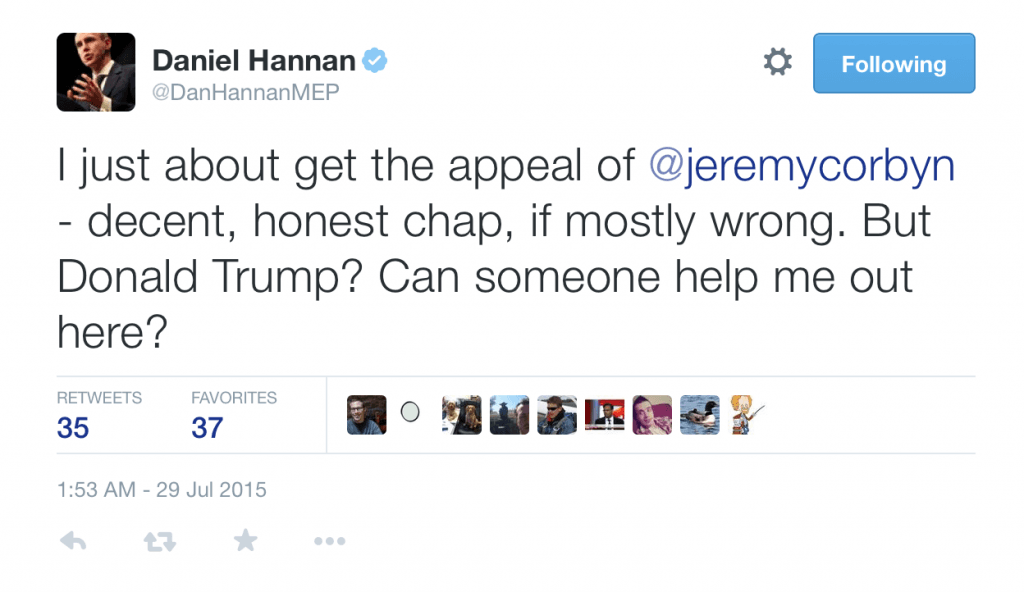 But Mr Hannan was swiftly rebuked by Twitter followers who asked if his flattery of Mr Corbyn as a “decent, honest chap” extended to Mr Corbyn’s support for terrorist groups Hamas and Hezbollah. Mr Corbyn is also known for his endorsement of the late socialist dictator Hugo Chavez in Venezuela.

Mr Hannan surprisingly supported Barack Obama for President in 2008, only to reverse his choice and launch a now defunct ‘British Tea Party’ in 2010.

Meanwhile, he continues to maintain the support of the Republican establishment in the United States, speaking at the Young America’s Foundation conference, and the Heritage Foundation on Wednesday.

His trip swiftly follows on the heels of UKIP leader Nigel Farage, who addressed the Heritage Foundation just two weeks ago.

While Mr Farage stopped short of endorsing Mr Trump, he did reflect on how the billionaire was talking about issues the electorate, especially the conservative base of the Republican party, care about – including immigration and border control.

In a follow up tweet, Mr Hannan linked to PJMedia’s Roger Kimball, using the words “clown in mufti” to describe Mr Trump.