Front National mayor Robert Ménard is going door to door with armed police officers in an illegal migrant squat, telling newcomers that criminals are not welcome in his town.

Ménard has already hit the headlines in his native France for this month’s edition of his town’s local newspaper, which he covered the front page with an image of a migrant train heading for the south of France. But now a video of him in his full mayoral regalia accompanied by city officials, machine-gun toting local police and an interpreter has emerged, purporting to have been shot only yesterday.

Entering a block of municipal housing, mayor Ménard is shocked to find the flats have been broken into by migrants newly arrived at the ancient town of Beziers, southern France. Confronting one man, he says:

“You are not welcome in this town. You came into this apartment, breaking the door, stealing the water. People have to pay for this water, but you are just stealing water and electricity. It is not allowed in this town to just come in to an apartment and to live in it without permission. 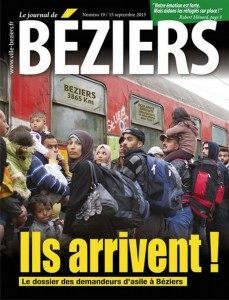 The Mayor’s magazine with it’s stark headline – ‘They Are Coming!’

“So I say again, you are not welcome in this town. If you had behaved like a decent person, you would have been welcome. You might be welcomed acting like this in big cities, but I’m not ready to do that here. You act like we have no choice but to accept you”.

Despite being confronted with the mayor and the armed police, the man thought he was in a position to negotiate. He replied:

“And where would I find these cities in Europe? I must stay here one more month. After that, I will go”.

Becoming more furious with the truculent newcomer, the mayor said he was calling the police.

Elected in 2014 under the banner of Marine le Pen’s Front National traditional nationalist conservative party, Ménard is no stranger to controversy. He angered the left-wing in France by banning spitting in the town, putting a curfew on youths being out at night, and has been investigated by police for daring to research the number of young Muslims living in Beziers.

He is presently also the focus of a possible lawsuit by the Agence France Presse news agency over his use of one of their photographs.

Gracing the front of the town magazine, the picture shows migrants boarding a train in Macedonia for Europe. Photoshopped in to the image are signs in the train windows, proclaiming the train’s destination was the town of Beziers, 3865km hence, where they would all find “free tuition, allowances and accommodation for all”.

AFP told BFMTV that their legal department had been instructed and they weren’t going to let the issue of their image being used go. AFP have reportedly said the Photoshop job done on the image was worthy of North Korea. But the mayor was bullish, and unafraid to defend his position:

“They come to our country, and are coming to Beziers tomorrow. This, I do not want,” he said.

“In a sensitive area of ​​Beziers, we have a number of homes that are empty. For weeks, Syrian refugees return to these apartments by breaking the doors, and by connecting illegally to water and electricity. And now I am asked to accommodate their children in our schools? It is a boon to crime. I will not accept this… some refugees are sent by the Islamic State to prepare a number of things in France.