Just weeks into taking power, the new Polish government is making itself felt in making small but heavily symbolic changes to the daily order of business. Having already torn up the previous government’s commitment to take thousands of migrants from the European Union (EU) as part of the continent-wide resettlement programme, Poland is now making tentative steps to remove visible signs of EU influence from public life. 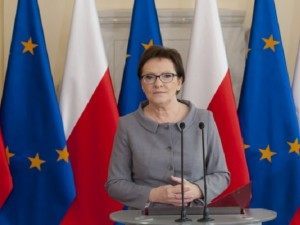 Under the last government, flags displayed at government events including press conferences were equally split between the Polish national, and the European Union. It was all change at Tuesday’s press conference with new Prime Minister Beata Szydlo, who appeared at her podium with Polish flags only.

Asked about the change, Mrs. Szydlo said she was happy with Poland remaining inside the European Union and the North Atlantic Treaty Organisation, but national matters called for the national flag.

In future government press briefings “will be held only with the most beautiful red and white Polish flags”, said Mrs. Szydlo.

The move has been called a ‘snub’ by Britain’s Financial Times and even prompted former Belgian prime minister and senior European Union parliamentarian Guy Verhofstadt to tweet “So you do not wish EU flags, but still want EU money?”.

Mrs. Szydlo’s Law and Justice party won a majority in last month’s general election, the first time any party has been able to govern without coalition partners since the end of communism.

The new foreign minister Witold Waszczykowski has quickly become one of the most vocal elected politicians in Europe on the matter of mass migration in the few days he has held his post. Speaking to the BBC, he slammed migrants for masquerading as refugees while in Europe, which he said they were not and in doing so were violating international law.

Mr. Waszczykowski also stood by the comments of a party colleague who said migrants brought diseases and parasites into Europe, when pressed by the BBC to condemn them. Citing his experience with Arab countries, Mr. Waszczykowski said: “Such a large, uncontrolled migration may cause problems for the life of Europe”.

“I spent years living in foreign countries, living in the Middle East. I was the ambassador to Iran.

“I know this region, I know the culture, I know what might happen with uncontrolled migration from regions where war has been going on for years”.