The documents encourage business to change their “culture”, allow people to use their “preferred” toilet, changing room and use the “correct” pronouns — Including “they” and “Mx.” — on official document and records.

The first document, called “Providing Services For Transgender Customers, a guide”, demands business “set the atmosphere and culture” up for the transgendered and explains that “the law specifically protects those with characteristics of gender reassignment”. 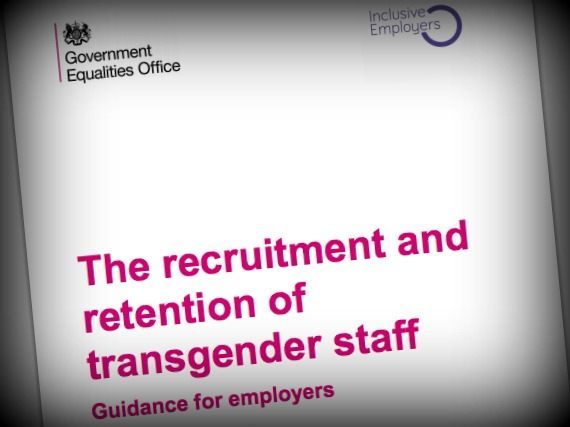 “Gender reassignment”, it tells us, “is when a person takes steps to alter the outward expression of their gender so that it is better aligns with sense of who they are”. The desirability of encouraging staff and customers to undergo major cosmetic surgery is not questioned.

Businesses are also told not to, “assume you can always tell someone’s gender by looking at them or hearing their voice. This can be particularly difficult on the phone”, it explains.

“A trans person should be free to select the facilities (such as toilets and changing rooms) appropriate to the gender which they present”, it says, specifically mentioning gyms and pub toilets.

In sport, “the transgender person may only be treated differently… if it is necessary to ensure fairness of competition or safety of competitors” during “activity of a competitive nature where physical strength, stamina, or physique of average persons of one sex would put them at a disadvantage.”

The “The Recruitment and Recognition of Transgender Staff”, was developed in conjunction of with Anglia Ruskin University, a trade union and various police forces. It encourages similar measures, which will “attract” the correct employees.

Employers are told to constantly check if their business is “diverse” enough; “Equality monitoring is a very important part of a recruitment process because it tells employers whether they are attracting a diverse range of applicants”.

Businesses are told to “make a plan”, “adopt approaches to meet the needs of employees” and put aside resources if they become aware of a “transitioning” member of staff. Ultimately, they are told to change the “culture” of their business to attract more transgendered staff.

The documents appear just after the government’s new Women and Equalities Committee completed their unapologetically one-sided “transgender rights” review. They are not part of the official recommendations of the committee, however, which will suggest changes in the law.

Yet they give an idea of the direction of change. The committee chair, Conservative Marie Miller, has already promised the recommendations will be “radical”.