Norway last week changed their asylum rules so refugees who had previously resided in safe-state Russia would be sent back, but they aren’t wanted there either — leaving a large number of migrants stuck at the frozen Russia Norway Border crossing with nowhere to go.

It is not clear exactly how many asylum seekers Norway has attempted to send back to Russia so far, but the decision to declare Russia a safe country and begin the process of turn-backs has strained tensions. Those asylum seekers effected by the change are now being batted back and forth between the two nations, alternately being arrested by police on each side and turned around. 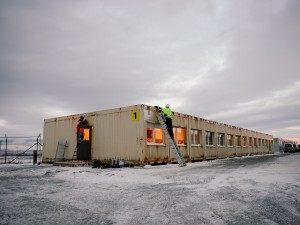 Because Norway is only sending migrants who have already been through Russia and have Russian residency permits, the government insists they are entirely within their rights to do so. A representative for the state justice ministry said: “It is our opinion that Russia is obligated to take back those people whom we are sending back to Russia”, reports TheLocal.no.

Russia and Norway have long standing agreements over the management of their northern border, and relations between the two countries are generally better than between Russia and many other European states. Yet this development is being played out against the possibility of border closure — something both nations are keen to avoid.

Over 4,000 migrants have attempted to gain access to Norway this year by taking a long journey through Murmansk and the Russian Federation’ Arctic territory to the border — 150 miles north of the Arctic circle. The route involves less border crossings than travelling up the Balkans and through Europe, and no Mediterranean sea crossing, during which thousands have perished this year already by drowning.

The Russian government through it’s state-owned media channels has expressed exasperation at the Norwegians for playing hard-ball over the crossing, pointing out that while the migrant flow through Russia is higher than previous years it is ordered and well documented. They contrast this to the chaotic migrant flows coming up through the Scandinavian nations from Sweden, which has pursued a policy of totally open borders to migration and has not been able to even count in migrants, as they have been so many in number.

As expressed in one editorial in the Norwegian language Sputnik site, “the Russian border is not the greatest danger Norway faces”. The migration flows through the Russian border resemble just a tenth of all 40,000 immigrants expected in the country this year.

Regardless, the Norwegian government has expressed their exasperation at the Russians over the situation, claiming that in the past year border crossings from Russia into Norway has grown from a dozen to over 4,000, yet crossings into neighbouring Finland has remained low.