The head of an organisation that has solicited nearly half a million dollars in foreign funding, using the money to target British general election campaigns and produce reports into what is deems the “far right” in Britain is reported to have met with one of its consistent targets, former English Defence League (EDL) leader Tommy Robinson – allegedly going so far as to “apologise” for not taking the threat of radical Islam seriously enough.

According to a report in Mr. Robinson’s new book, “Enemy of the State“, Nick Lowles of the Hope Not Hate group visited the former EDL leader. Mr. Robinson writes in his book:

I also got a visit from Nick Lowles, who runs the far left ‘Hope not Hate’ anti-racism and anti-fascism group. They’ve never missed a single opportunity to give it to me and the EDL. However Lowles was full of surprises. He came and apologised, said that they had underestimated the threat to us of radical Islam.

Basically, he said that we had a point, that grooming, ISIS, everything we are seeing, is a huge problem. Wonders never cease. I asked him out of interest about the area he lives in, its ethnic make-up and how he’d feel sending his kids to a school that was 80% Muslim.

I think he got it. He still hates the far right – but so do I!

“I did indeed say that issues of Islamist extremism and grooming needing addressing – as I have repeatedly said publicly for many years – but I also told him that one didn’t have to be in the far right to do something about it.”

He added: “Yes I have met Stephen Lennon and I have made no secret of that. I did so to ascertain where he was politically as I considered him the one person who could revitalise a right wing street movement. I was also keen to steer him away from rejoining a street movement and I repeatedly explained why his views and solutions were wrong.

“The initial contact was made via Jamie Bartlett of Demos, who was keen for me to approach Stephen as part of a TV programme. I refused to participate in the TV programme but took up the offer to meet him.

“I have very extensive notes of my conversation.

“I think everyone on the left has underestimated the jihadist threat and that it needs to be confronted. I would say that is a pretty uncontentious view to hold.”

But Mr. Lowles’s organisation – Hope Not Hate – continues to focus most of its time and effort on the “far right” in Britain and abroad, lumping the UK Independence Party (UKIP) in with the same crowd.

During the 2015 General Election in Britain, Hope Not Hate activists descended on the constituency of South Thanet, where UKIP leader Nigel Farage was fighting a close battle. The activists not only attempted to disrupt UKIP’s campaigning, but also boosted the support for the Tory AND Labour candidates, taking adverts out in newspapers and leafletting people’s homes. 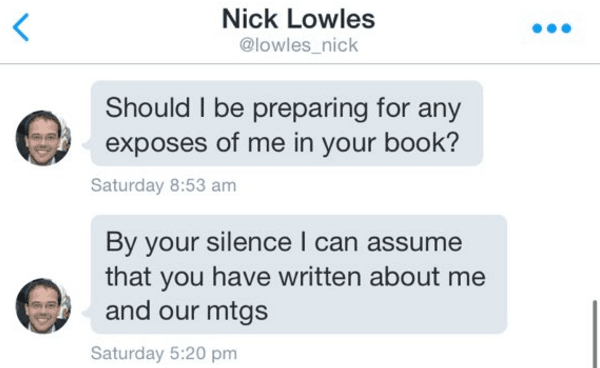 Breitbart London has also seen alleged Twitter direct message exchanges between Mr. Lowles and Mr. Robinson, in which Mr. Lowles asks the former EDL chief: “Should I be preparing for any exposes of me in your book?

When Mr. Robinson didn’t reply, Mr. Lowles followed up with, “By your silence I can assume that you have written about me and our mtgs” implying the pair met more than once.

Mr. Robinson’s new book, Enemy of the State, was released this week.