An Italian village in the fiercely independent north has erected a sign proclaiming their proud Christian, Western tradition, but have invited the scorn of the politically correct in doing so.

Pontoglio, a village of 7,000 in Lombardy put up the road sign below their official road signs at the limits of the settlement. Setting out to visitors and newcomers the exact standards of behaviour expected of them, the official Italian-style road sign reads: 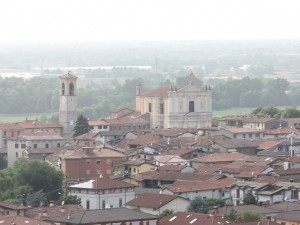 “This village is of Western culture and is profoundly Christian.

“Those who do not respect these cultures and traditions will be invited to leave”.

Far from being a piece of guerilla installation art or a sardonic statement about hardening attitudes towards refugees in northern Italy, the sign has been legally errected in accordance with Italian law by the mayor of Pontoglio, who first sought the permission of the town council.

Explaining his motivations in a letter, Mayor Alessandro Seghezzi was moved to order the sign because he wanted to preserve the area’s cultural values and defend his own citizens, reports TheLocal.it.

The sign is “an invitation to respect the culture and traditions. A culture that is based on mutual respect: from the woman to music, from the costumes, from customs to the traditional rites. Respect for others, is for us, the first real form of civilization and liberty”, he said.

Many news outlets have reported that mayor Seghezzi’s sign has generated controversy, with Britain’s Daily Mail and the Huffington Post both reporting it to be “racist” and directed primarily at Muslims. Yet anger at the signs seems predominantly centred around Facebook and Twitter.

A colleague of the mayor, councillor Paolo Bocchi leapt to the defence of the sign, remarking that any offence taken was merely down to individuals interpreting the sign with their own prejudices. Indeed, “there is nothing racist… this is historical information, this is our tradition. I dare anyone to say Pontoglio has no Christian traditions”.

The village of Pontoglio sits in Lombardy, one of the main power bases for Euro-sceptic, separatist Lega Nord movement. This independently minded, anti-mass migration politics finds expression in many of the local and regional politicians in the area, including mayor Seghezzi.

The mayor was last in the headlines in July, when he hiked the price of residency permits in his village to €425, well above the national average of €50, reports the Bresica Cronaca. Although accused to discrimination, the mayor insisted the price reflected the technical costs of administering the paperwork, and the sudden inflow of newcomers had compelled the council to employ more administrators to deal with it, a cost the village could not bear alone.