Numerous calls have been made for the French to deploy their army in Calais after 50 migrants stormed a ferry last night, causing chaos and bringing the port to a standstill. Anarchist groups aiding the migrants co-ordinated the attack and a demonstration preceding it that saw statues and shops in the town centre daubed in graffiti.

Ferry workers turned fire hoses on the migrants as they stormed the ship, ironically called the Spirit of Britain, in a desperate bid to keep them at bay. Although around 50 made it aboard the ferry itself – and then milled around seemingly at a loss to know what to do next – only 35 arrests were made.

Twenty-four of those arrested were migrants, the Telegraph has reported, but a further eleven were westerners allied to the no borders movement which advocates the smashing of national frontiers and free flow of people across the continent. A number of British people may be among the 11.

The group has remained defiantly “against all states, and anything that places borders between us”.

DOVER: Cross channel ferries to Dover have been disrupted after around 50 migrants ‘invaded’ a P&O ferry in Calais. pic.twitter.com/VtktGLBNHN

Earlier in the day around 2000 people took part in a protest in Calais, organised by the anarchists, to demand an end to all borders. Statues of former French President General Charles de Gaulle and Yvonne Vendroux (the General’s wife) situated in Calais town centre were daubed with graffiti.

The general has been deemed a “mass murderer, coloniser and chief torturer of Algerians” by the anarchists (he led the French Committee of National Liberation in a campaign to free France from the grip of Nazi Germany from a base in Algiers during the second world war).

ANIK FRANCE /// FUCK FRANCE /// against all states and anything that places borders between us! #calais pic.twitter.com/gGmZu9LiH4

A break-off group of around 150 migrants and anarchists then headed to the port, where they broke down barriers and streamed through security fencing.

The majority were escorted back to the Jungle by police.

The mayor of Calais Natascha Bouchart took to Facebook to lament that her advice not to let the protest go ahead was not heeded. She called on the government to henceforth protect Calaisians and their property.

“Once again, events have proved that the migrant’s defenders mainly intend to disrupt the economic life of Calais,” she wrote.

“I had [beforehand] conveyed to the state my deepest disapproval vis-à-vis this event. In view of the events, it is clear that my concerns were legitimate. I deeply regret that the opinion of the Mayor of Calais [Bouchart] was not followed.

“This lack of courage and of decision-making has once again led to Calais being in the spotlight for negative reasons. I therefore once again urge the government to take all necessary measures to protect Calais and the people of Calais, and also the economy of Calais.” 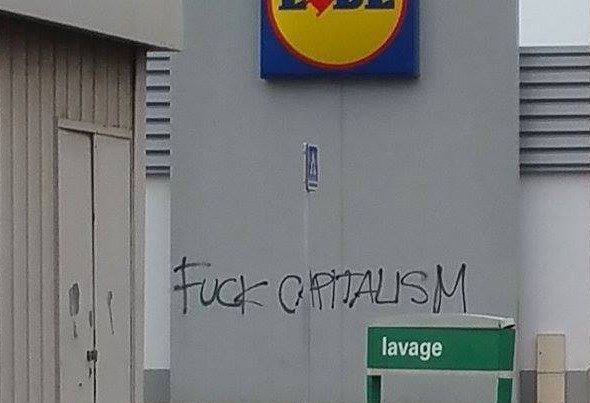 Richard Burnett, chief executive of the Road Haulage Association echoed Ms Bouchart’s calls for action, warning that it was “only a matter of time before our worst fears become a reality and a UK-bound truck driver is killed”.

“This shocking breach of security clearly shows that the migrant mayhem in and around Calais is not being tackled,” he said.

“It is now time for the authorities to acknowledge and meet our demand for the French military to be deployed to secure the port and its approaches.”

He added: “The number of migrants in the camp has escalated, the number of attempts – violent attempts against drivers – has been escalating, and we think now, after yesterday’s incident, enough is enough, the time for discussion’s over – we need action.”

Rumours have been circulating on social media this morning that one migrant, an Algerian, was stabbed by anti-migrant protesters. Although the rumour has not been confirmed (others in the area said he may have suffered a heart attack), it illustrates the level of tension between the two groups in Calais at the moment.

Damian Collins, Conservative MP for Folkestone and Hythe, backed Mr Burnett’s call, telling the BBC it was “incumbent on the French authorities to protect the port”.

“If that requires deploying the military, then the French should do that,” he added.