Hungarian Prime Minister Viktor Orban is continuing to fight his own rearguard action against both mass migration and the left-wing European establishment, calling illegal migrants “evil” and accusing Mrs. Merkel of creating instability.

While the European Union (EU) and the multicultural northern member states prevaricate over the migrant crisis, more conservative Eastern European nations Hungary, Poland, the Czech Republic, and Slovakia have been meeting in Prague to discuss closing the Balkans to illegal immigrants. 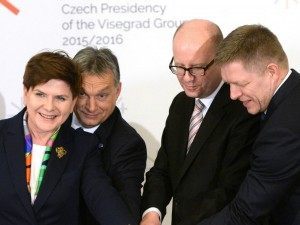 His comments were backed up by other leaders present at the conference. Slovak prime minister Robert Fico expressed his distaste at Germany attempting to use the European Union to force less cooperative member states into adopting their migrant policies, remarking: “Germany has made ​​a mistake with this welcoming policy and now wants to force others to pay for it”.

The meeting of the so-called Visegrád Group of four nations, yesterday celebrating their 25th anniversary as a political power bloc has been discussing sending military and materiel aid — troops, border police, and barbed wire — to Macedonia and Bulgaria in the south. The plan accepts the idea that Greece is already a failed state and has no capacity to control its own borders, so what the leaders have dubbed a “backup border” is now required.

Justifying the southern border protecting the nations north of Greece from the migrant crisis, Czech Prime Minister Bohuslav Sobotka said “We should not abandon the Balkans to their fate”.

The so-called Balkan route has been the main point of ingress to Europe for hundreds of thousands of illegals in the past year, with countries on the migratory route leading north to Germany and Sweden being overwhelmed with tens of thousands crossing their borders daily. 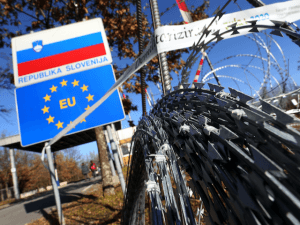 Releasing a joint statement, the four Visegrád leaders said the migrant crisis is “a threat to peace, security and the prosperity of EU citizens”, and called for all European nations to pull together and join them in securing the continent from illegal immigration, and to end the root causes of mass migration including the Syrian civil war. Closing Europe off from illegals with a series of fences is preferable to the re-emergence of borders within Europe, they said.

The leaders set the European Union a March 17th deadline to “produce satisfactory results so as to avoid repeating the events of 2015”.

Although the comments of the Visegrád leaders will be deeply popular with many in Europe and especially in their own nations, they have proven controversial already elsewhere, including in Austria where Chancellor Werner Faymann has criticised the proposed “back up border” along the outer edge of Macedonia and Bulgaria and facing European Union member Greece.

Attempting to appeal to a sense of posterity, Mr. Faymann claimed the fence would not get a favourable entry in the history books, and asked what would Europe do when they had “100,000 women, children and men in front of the border” pushing on the fence. He predicted Macedonia, even with military aid from the Visegrád would collapse under the strain.

Angela Merkel was also deeply unimpressed by the proposals. Stating that Macedonia isn’t even a member of the European Union, she said building the fence would spark an “emergency” in Greece.

Going further in criticism was Luxembourg politician Jean Asselborn, who adopting language re-popularised of late by the Islamic State called the Visegrád four “a club of apostates” to the European Project.