The BBC has placed the number of people killed by the Russian Communist dictator Joseph Stalin in the “hundreds of thousands,” massively downplaying the truly horrific scale of his 30 year reign of terror. The true figure is dispute, but estimates place it in the tens of millions. 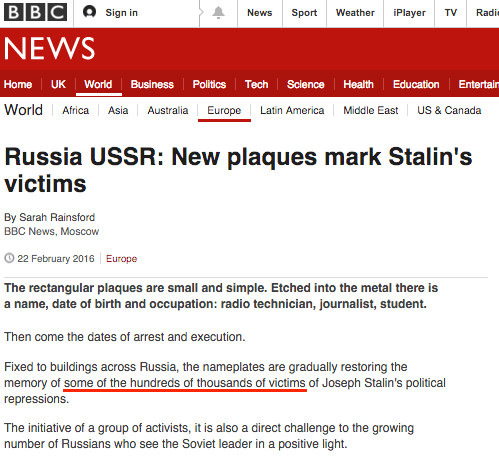 In an article published on Monday 22nd February – about a group of activists who have begun commemorating some of Stalin’s victims by affixing memorial plaques to buildings across Russia – the BBC’s Sarah Rainsford writes “the nameplates are gradually restoring the memory of some of the hundreds of thousands of victims of Joseph Stalin’s political repressions.”

The BBC claim that Stalin’s victims numbered mere thousands is made again in the article’s sub-headline which reads: “The BBC’s Sarah Rainsford in Moscow reports on a new scheme to remember the thousands of people executed in the Soviet Union under Joseph Stalin.”

But Stalin’s victims didn’t number in the thousands, or even in the hundreds of thousands. Exact figures are unsurprisingly difficult to ascertain, given both the scope and scale of the massacres enacted by Stalin, but the true number is thought to be anywhere between 20 million (not including the 20 million Soviets who died fighting during World War II) to Aleksandr Solzhenitsyn’s estimate of 60 million, a full ten times more than the number of Jews killed by Hitler during the Holocaust.

Millions of those people were poor peasants who died of starvation thanks to Stalin’s communist policies, but even if the BBC is referring strictly to those considered to be “enemies of the people” by the Communist regime, the numbers still run into the millions.

In 1937, the Soviet government enacted Order No. 00447, which allowed for faster trials for those suspected of being “socially harmful elements” or “enemies of the state”. Prisoners convicted under the new rules were either executed immediately, or sent to gulags, work camps where they would be worked to death.

According to Ian Frazer, writing in the New Yorker in 2010, “Well over a million died in the camps just in 1937-1938, the Great Purge’s peak years. A main goal of the Soviet labor-camp system was to take those citizens the Soviet Union did not need, for political or social or unfathomable reasons, and convert their lives to gold and timber, which could be traded abroad.

“These figures aren’t new in coming to light – in 1989, two years before the collapse of the Soviet Union, Georgian historian Roy Aleksandrovich Medvedev published his estimate of 20 million killed through Stalin’s policies alone. His grim calculations included the 9-11 million peasants forced off their land and subsequently starved, the 2-3 million arrested during the mass collectivisation program, one million who were executed during the “Great Terror” of 1937/8, and a further million or more arrested for political crimes between 1946 and 1953.

“In fact, the numbers were known long before then even. Frazer continues: “Almost from the beginnings of the camps, people outside the country knew or suspected what was going on in them, but the Soviet government simply denied all accusations and the subject receded from view.”

So vast was the scale of Stalin’s murderous ambitions that Stanford history Professor Norman Naimark believes his crimes should be officially recognised as genocide.

In his 2010 book Stalin’s Genocides he argues that the Soviet elimination of the kulaks – a class of high income farmers – and the subsequent famine among the peasantry, as well as the political murders of 1937/8 each constitute a genocide in their own right.

In the case of the kulaks, there is clear evidence that they were persecuted as a people: activists at the time declared: “We will exile the kulak by the thousand when necessary – shoot the kulak breed.” “We will make soap of kulaks.” “Our class enemies must be wiped off the face of the earth.”

“I make the argument that these matters shouldn’t be seen as discrete episodes, but seen together,” said Naimark, “It’s a horrific case of genocide – the purposeful elimination of all or part of a social group, a political group.”

Naimark finds common ground between Stalin and Hitler, writing: “Both chewed up the lives of human beings in the name of a transformative vision of Utopia. Both destroyed their countries and societies, as well as vast numbers of people inside and outside their own states. Both, in the end, were genocidaires.”

And yet, as Frazer puts it: “somehow Stalin gets a pass. People know he was horrible, but he has not yet been declared horrible officially.”

This is not the first time the BBC has been criticised for looking the other way when faced with Stalin’s crimes: in 2012 the Corporation, along with the Guardian, was heavily criticised for lionising the Marxist historian Eric Hobsbawm, who once argued that 20 million deaths would be a price worth paying for Communism to have succeeded.