An explosive leaked document from the Austria intelligence agency has revealed they expect a “repeat” of the 2015, resulting in Austria becoming a “huge asylum waiting zone” with up to half a million migrants stuck in transit.

Austria took in 68,000 refugees last year. However, according to documents from the country’s Military Intelligence Office (HNaA), seen by Kronen Zeitung, up to 500,000 migrants could end up in Austria by the summer of 2016.

This would mean that around one in 17 people in the nation of just 8.5 million would be a recently arrived migrant. The build up, the document explains, would be due to an ever-increasing number of arrivals and changes in border policies along the Balkans route.

The bleak predictions might sound like an exaggeration, but already this year, more than 131,000 migrants have reached Europe via the Mediterranean – more than the total number in the first half of 2015, the United Nations said Tuesday. 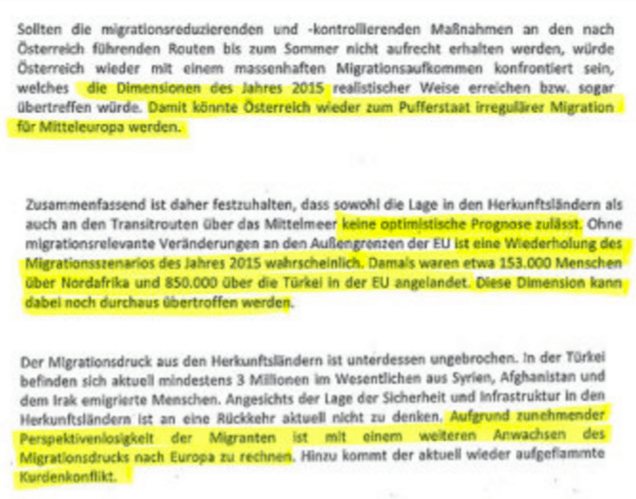 In February, Austria said it would cap its yearly intake of migrants at 37,000. They plan to allow just 80 migrants a day to apply for asylum while allowing no more than 3,200 migrants to transit through its territory.

However, the document reveals that they have little confidence this policy will hold up, partially due to the policies of their German neighbours. It says:

“Although Chancellor Angela Merkel says she accepts all asylum seekers… This means that in the summer up to 500,000 refugees could simultaneously be stuck with us in Austria… This could not be done”.

In September last year, Germany suddenly and unexpectedly introduced temporary border controls on their Austrian frontier in a bid to limit the influx of migrants.

Macedonia recently shut off it border with Greece, also fearing that countries further down the so-call Balkans route to northern Europe will stop accepting migrants. 7,000 migrants are now trapped between the two nations. This has become known as the domino effect.

The vast majority of the migrants entering Europe are coming into Greece from Turkey, and “Turkey is in no way cooperating in the prevention of the deposition of migrants”, writes HNaA in the leaked document. “Already smuggling organisations show intensive preparations for a lucrative ‘financial year’”, they add.