DRESDEN (GERMANY) (AFP) – The founder of Germany’s xenophobic and anti-Islamic PEGIDA movement will appear in court Tuesday on hate speech charges for branding refugees “cattle” and “scum” on social media.

Lutz Bachmann, founder of the far-right “Patriotic Europeans Against the Islamisation of the Occident” movement, was charged in October with inciting racial hatred through a series of widely-shared Facebook posts.

The trial will be held under tight security in Dresden in the former communist east, the birthplace of PEGIDA, which bitterly opposes Chancellor Angela Merkel’s liberal migration policy that brought more than a million asylum seekers to Germany last year.

The court said the 43-year-old’s comments, which date back to 2014, also “disrupted public order” and constituted an “attack on the dignity” of refugees.

If found guilty, Bachmann could face between three months and five years in jail. 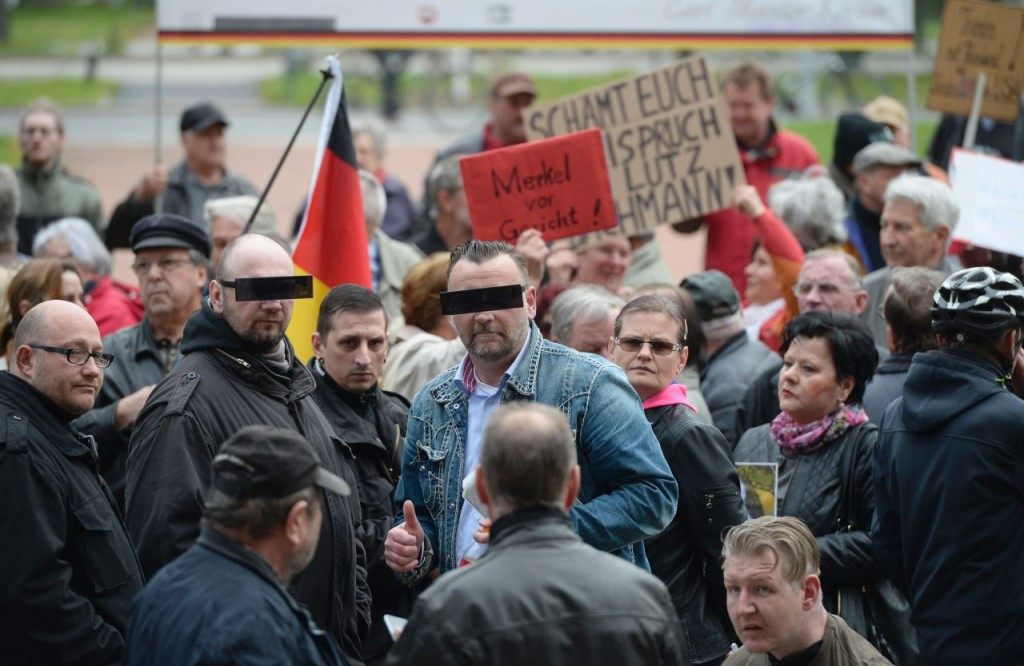 Lutz Bachmann, founder of Germany’s anti-Islamic PEGIDA movement (Patriotic Europeans Against the Islamisation of the Occident) has his eyes covered as if pixelized by media and gives a thumb up as he arrives for his trial on April 19, 2016 in Dresden, eastern Germany. (ROBERT MICHAEL/AFP/Getty Images)

The comments were published in September 2014, shortly before PEGIDA started life as a xenophobic Facebook group.

The group initially drew just a few hundred supporters to demonstrations in Dresden before gaining strength, peaking with rallies of up to 25,000 people in early 2015.

Interest subsequently began to wane following wide coverage of Bachmann’s overtly-racist comments and the surfacing of “selfies” in which he sported a Hitler-style moustache and hairstyle.

But the pendulum swung back a few months later, as tens of thousands of asylum-seekers — many fleeing war in mostly Muslim countries such as Syria, Iraq and Afghanistan — poured into Germany each week.

Bachmann has repeatedly labelled the newcomers “criminal invaders” while also railing against “traitor” politicians and the “liar press”, whom he blames for jointly promoting multiculturalism.

At PEGIDA’s weekly rally in Dresden on Monday evening, Bachmann made no reference to his trial but hurled a barb at the row over a German comedian who has written a satirical poem about Turkish President Recep Tayyip Erdogan.

Popular comic Jan Boehmermann could be convicted under the rarely-enforced section 103 of the criminal code — insulting organs or representatives of foreign states.

“Imagine the outcry… if that poem had been written by me,” Bachmann told a crowd of several thousand.

“I would have been immediately arrested on stage, placed in custody… (and) executed,” he said sardonically. 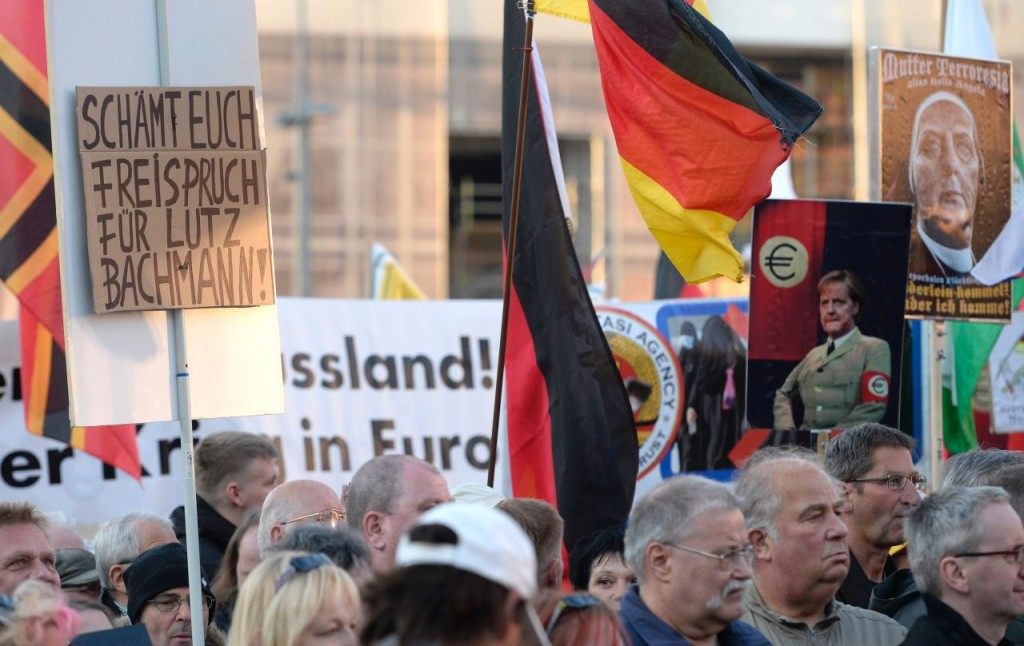 A poster reads ‘Shame on you. Free speech for Lutz Bachmann’ during the PEGIDA movement (Patriotic Europeans Against the Islamisation of the Occident) rally on April 18, 2016 in Dresden. (ROBERT MICHAEL/AFP/Getty Images)

A trained chef and head of a public relations agency, Bachmann has previously been convicted of drug, theft and assault charges.

In the late 1990s, he left Germany for South Africa to avoid a jail term, but was extradited two years later and served more than 12 months behind bars in Germany.

In the current heated political climate, the rightwing populist Alternative for Germany (AfD) party also made strong gains in recent state elections on the back of a protest vote against Merkel’s open-door policy on refugees.

This week, AfD deputy leader and member of the European parliament Beatrix von Storch described Islam as “a political ideology that is incompatible with the German constitution”.

She also said her party would call for a ban on Islamic symbols such as minarets on mosques, muezzins’ calls to prayer and full-face veils.

Aiman Mazyek, chairman of the Central Council of Muslims in Germany, accused the party of “riding a wave of Islamophobia”.

“It is the first time since Hitler’s Germany that there is a party which discredits and existentially threatens an entire religious community,” he said.

The opposition Greens’ senior lawmaker Konstantin von Notz accused the AfD of trying to “deliberately turn Islam into a bogeyman to capture voters”.

Germany is home to four million Muslims, and many of the country’s most recent arrivals adhere to the faith.