The Church of Wales is investigating a minister who tweeted about radical Islam and expressed online a positive opinion of the anti-Islamisation group PEGIDA.

The Father says he and his wife have been abused and harassed since an “anti-racist” group named and shamed him online.

Father David Lloyd of the parish of Newcastle, in the diocese of Llandoff, said that “idiots who dismiss” PEGIDA and other nationalistic groups need to “grow up [and] overcome their prejudices.” 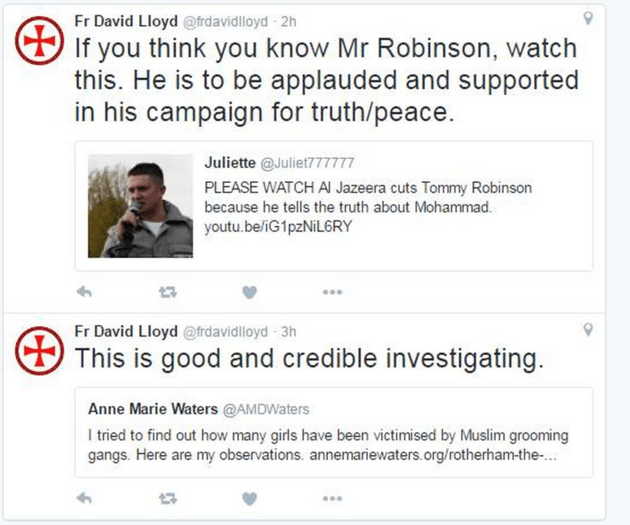 “You might discover that these groups are working hard for your freedom and your children’s future while you stand idly by,” he added in another post.

A spokesperson from the Church in Wales has now confirmed the tweets were Father Lloyd, and that an investigation was now underway. He told the Huffington Post:

“The Revd David Lloyd’s views expressed in his tweets are his personal ones and not those of the Church in Wales.

“We apologise for any offence they have caused and are investigating the matter further.”

It is worth pointing out that the Church in Wales Twitter feed is itself notably political and contentious, expressing support for remaining in the European Union, the Calais ‘Jungle’ camp, and mass migration.

The Father’s posts were initially reported by the IRBF group, who claim to “fight against Social Media hate pages and groups.”

Following an online backlash, the Father claims that his wife has been “abused” and says that he has been forced off social media all together.

To walk with refugees means putting yourself in their shoes, Archbishop’s Christmas messagehttps://t.co/1AtLqRiYta pic.twitter.com/c1QdGXRJEr

“Due to abusive phone calls to my wife, me and now my superiors at the Church in Wales, I will no longer be posting as an individual. My parish page will still run,” he wrote on Facebook.

Adding: “Thanks for all the fun you’ve shared with me and for helping me through the dark, painful and sleep-deprived times. From an alleged ‘racist and Islamophobe’…”

PEGIDA has been consistently labeled “far-right” by politicians and the liberal media. However, in the UK and abroad it has so far proven to be a peaceful movement.

Adherents take afternoon strolls, instead of marches, in the model of the peaceful protests made in Germany and Poland against the former communist regimes.

The majority of arrests occurring at walks have been made among the left-wing, ‘anti-fascist’ counter-protesters for whom throwing fireworks, glass bottles, and stones is normal.