Police have charged Tommy Robinson, a PEGIDA UK organiser, with “inciting racial hatred against Muslims” after he was pictured with a flag with “Fuck ISIS” written on it, his lawyer has claimed.

The lawyer alleged in a statement that an application for a football banning order against Mr. Robinson was “brought on the basis of a harassment campaign” linked to his “high social media profile, and is associated with Pegida UK” and amounted to an attack on his “free speech”. 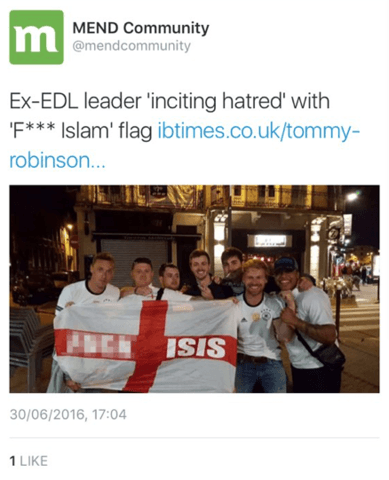 Mr. Robinson had travelled to France to watch the Euro 2016 tournament, leaving shortly before Bedfordshire Police planned to serve him with a fresh football banning order.

A previous three-year ban expired in 2014, and Mr. Robinson is not believed to have been involved in any football related disturbances since.

However, on his return to the UK, Bedfordshire Police immediately served him with the fresh application. A subsequent hearing at Luton Magistrates’ Court on Friday saw bail conditions imposed to have Robinson’s passport taken away.

The application claimed that he “poses a significant risk of both violence and disorder… This is especially so in terms of his established capacity to organise disorder from an anti-Muslim perspective”.

Adding: “Despite… recently reported ‘good conduct’ at Luton Town Football Club, significant concerns remain regarding his intentions and influences upon others to inflame racial hatred in a country where tensions are already high” – presumably because of recent terrorist attacks attributed to Islamic State (ISIS).

The court will hear the application in September 2016, and Mr. Robinson has said he will contest it. His lawyer, Alison Gurden, explained:

“The mainstay of the application by Bedfordshire Police is that Tommy Robinson, while in France was pictured wearing an Anti-ISIS T-Shirt, and holding up an English Saint George Cross flag with ‘Fuck ISIS’ written across it, and that this was aimed at inciting racial hatred against Muslims.”

Mrs. Gurden added: “Both I and my client are very concerned that the Chief Constable of Bedfordshire Police and the UK Football Policing Unit have equated Tommy Robinson’s demonstration against a banned extremist terrorist organisation as being the same as showing hatred towards people of the Muslim faith.

“The Prime Minister David Cameron in his House of Commons speech on 2nd December 2015 referred to the ‘evil’ of ISIS, and that British Muslims were appalled by ISIS. He further said that the attacks in Syria by the British Military were ‘far from an attack on Islam, we are engaging in the defence of Islam…failing to act would betray British Muslims’.

“It now appears that both Bedfordshire Police and the UK Football Policing Unit are linking ISIS to the general Muslim people and population, because it suits their purpose of the campaign of harassment against Tommy Robinson.”

She also wrote: “I am concerned that this application is brought on the basis of a harassment campaign against Tommy Robinson, such that the Assistant Director of the United Kingdom Football Policing Unit, has become involved and provided a statement to the effect that as Tommy Robinson has a high social media profile, and is associated with Pegida UK this is likely to act as a catalyst for disorder and violence outside of the United Kingdom.

“This clearly is an attack on Tommy Robinson’s freedom of speech and association… he chose not to travel to Marseille, but instead was in Paris without any incident of violence or disorder.”

In April of this year, a judge dismissed a charge of battery brought against Mr. Robinson, questioning the police’s motives for pursuing the case against him when they did. Mr. Robinson has alleged “political policing” was used to silence him and his views on radical Islam.