Video footage has emerged of confrontations between individuals claimed to be supporters of Islamic State and mourning Germans at a shrine to victims of Friday’s shooting in Munich, while police stand by and explain they are powerless to get involved.

While videos showing the exchanges between “Allahu Akbar” shouting men and angered locals who had come to pay respects to the dead have received almost no attention in German media, Italian newspaper Il Fatto Quotidiano reports on the arguments showing the raw passions and anger unearthed by the killings.

In the short video, a well-built German male can be seen shouting down what is described by the Italian paper as “a group of young Muslim boys” who, railing against an “unjust world”, begin to chant in unison “Allahu Akbar”. The phrase is the same Islamic salutation said to have been cried by the killer as he started his rampage. UnderTirol reports the Muslim men are “alleged Islamic State sympathisers”. 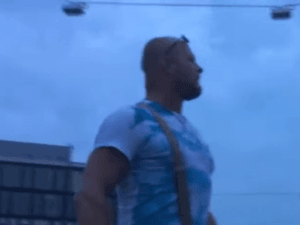 The German male can be heard castigating police for standing back and taking no action, and then direct his anger at the Muslim males. He shouts: “Shut up with that Allahu Akbar s**t, f**k you motherf***er… Shut your mouth. Piss off. F***ing bulls**t”. Although in times past such comments towards the minority in Germany would have provoked a shocked or even angry reaction from bystanders, instead it earned applause from fellow mourners.

Again appealing to the police officers standing by, another member of the public joins in and points out the behaviour of the Muslim men, shouting to the officers: “They are doing Islamic State hand signs!”. Turning his attention back to the Muslim males, he continues by directing his insults at them: “You pigs. You b******s. They are doing it on purpose. You pigs!”

A final appeal to police elicits a response, when one of the crowd asks one of them to “do something about it for f***ks sake”, the officer simply responds “I can’t do anything about it”. Later, to prevent a confrontation developing, officers place themselves between the two sides but no arrests are made.

The short video presents a different view on the fraying tensions in Germany, which still officially supports a policy of near unlimited mass migration and open borders. While Chancellor Angela Merkel continues to steer the nation in the same direction, beneath the surface discontent bubbles. Breitbart London reported in May on a poll that showed the majority of Germans rejected the notion of Islam having a place in their nation.

Another poll showed the majority of Germans found themselves “scared” of so-called refugees. The research also found more thought that there were fewer positives to immigration than negatives.