Update 18:28 BST – The Italian premier has now said the death toll is at least 120 people.

Drone footage shows some of the devastation after earthquake in central Italy kills at least 63 pic.twitter.com/K63KE8tF8o

At least 73 people have killed in the 6.2 magnitude quake, including a family of four who were found trapped beneath rubble showing no signs of life, Reuters reports.

Update 14.55 BST – The latest images from the region show a destroyed medieval church and a hastily assembled field hospital.

People stand in front of a damaged church in Amatrice on August 24, 2016 (FILIPPO MONTEFORTE/AFP/Getty Images) 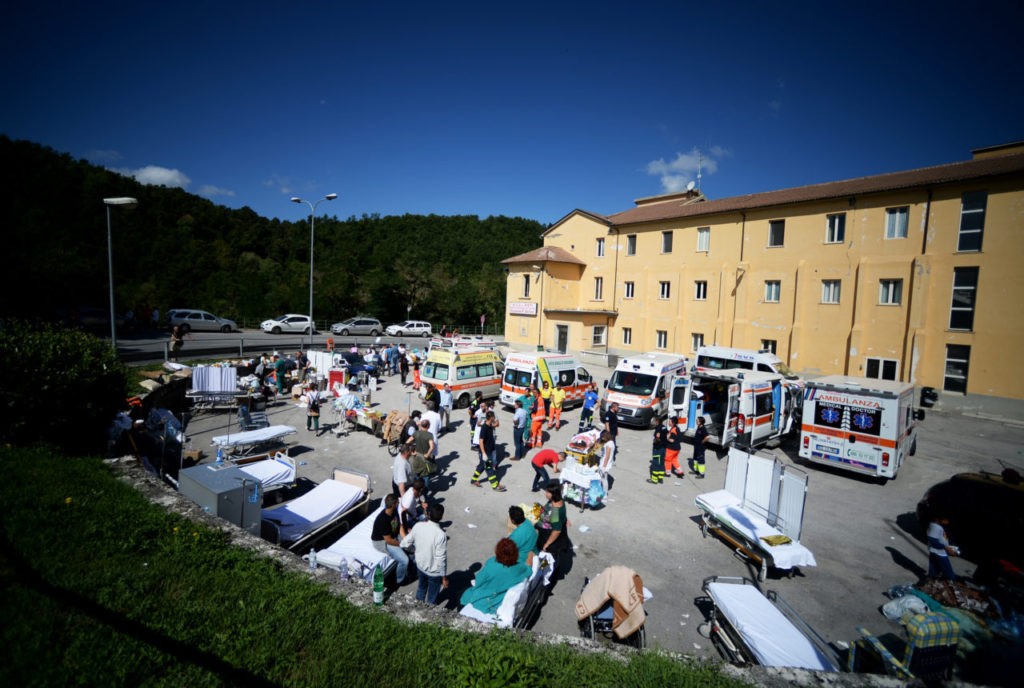 Rescuers set up a first aid camp in the courtyard of the hospital of Amatrice on August 24, 2016 a (FILIPPO MONTEFORTE/AFP/Getty Images) 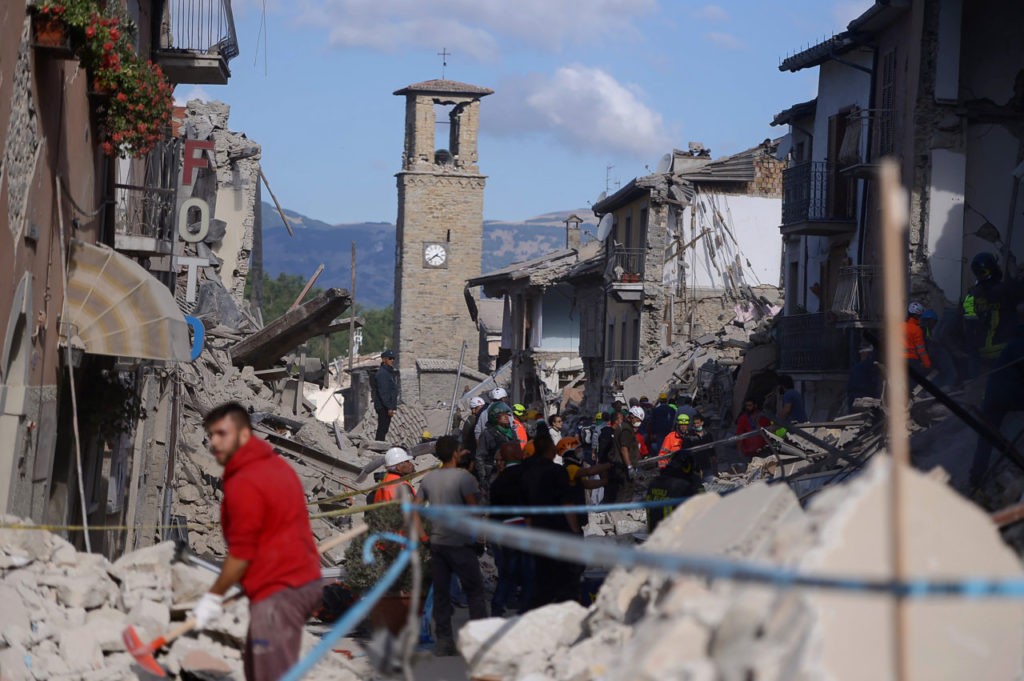 Rescuers and firemen inspect the rubble of buildings in Amatrice on August 24, 2016 (FILIPPO MONTEFORTE/AFP/Getty Images)

Germany’s Zeit reports the death toll has now hit 63, with many having died in hospital after being pulled from the rubble. some 2,500 have been left homeless in just one town, Accumoli, where the mayor has vowed to build a “tent city” as a short term fix.

Matteo Renzi said that, “when things don’t go well the whole of Italy demonstrates its most beautiful aspect”.

Italian PM says that “when things don’t go well the whole of Italy demonstrates its most beautiful aspect” https://t.co/eVs5UJqAfm

The story so far from Reuters

(REUTERS) – A powerful earthquake devastated a string of mountainous towns in central Italy on Wednesday, trapping residents under piles of rubble, killing at least 38 people and leaving thousands homeless.

The quake struck in the early hours of the morning when most residents were asleep, razing homes and buckling roads in a cluster of communities some 140 km (85 miles) east of Rome.

A family of four, including two boys aged 8 months and 9 years, were buried when their house in Accumoli imploded.

As rescue workers carried away the body of the infant, carefully covered by a small blanket, the children’s grandmother blamed God: “He took them all at once,” she wailed.

The army was mobilized to help with special heavy equipment and the treasury released 235 million euros ($265 million) of emergency funds. At the Vatican, Pope Francis canceled part of his general audience to pray for the victims.

Aerial photographs showed whole areas of Amatrice, voted last year as one of Italy’s most beautiful historic towns, flattened by the 6.2 magnitude quake. 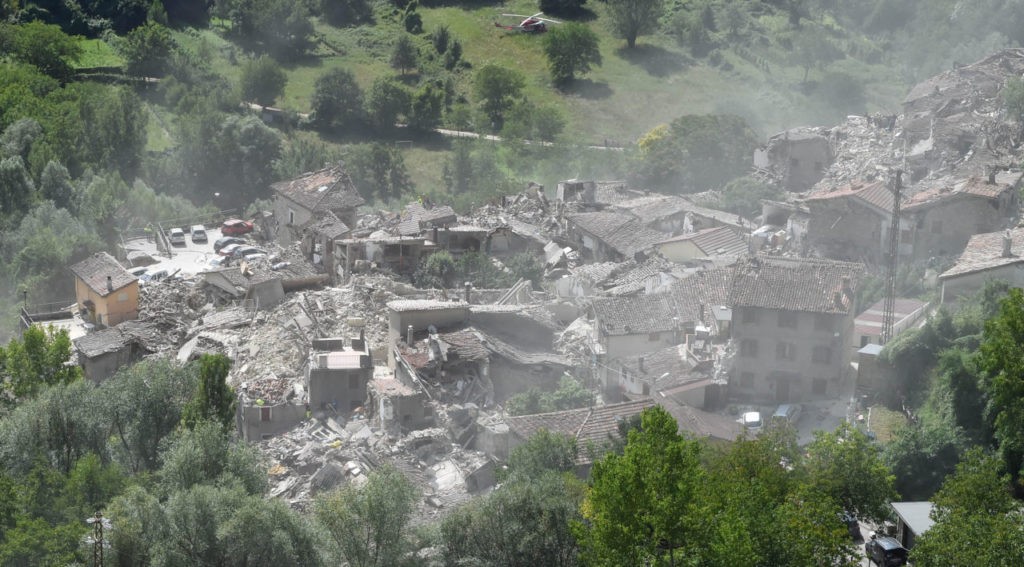 “It’s all young people here, it’s holiday season, the town festival was to have been held the day after tomorrow so lots of people came for that,” said Amatrice resident Giancarlo, sitting in the road wearing just his underwear.

“It’s terrible, I’m 65-years-old and I have never experienced anything like this, small tremors, yes, but nothing this big. This is a catastrophe,” he said.

Accumoli mayor Stefano Petrucci said some 2,500 were left homeless in the local community, which is made up of 17 hamlets. 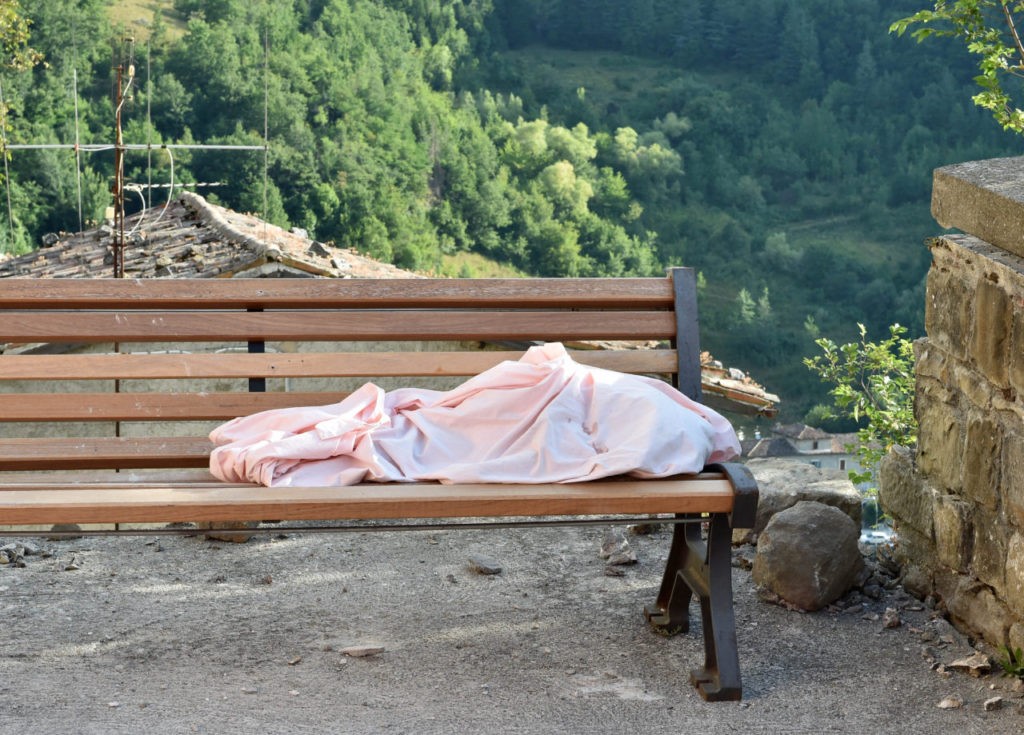 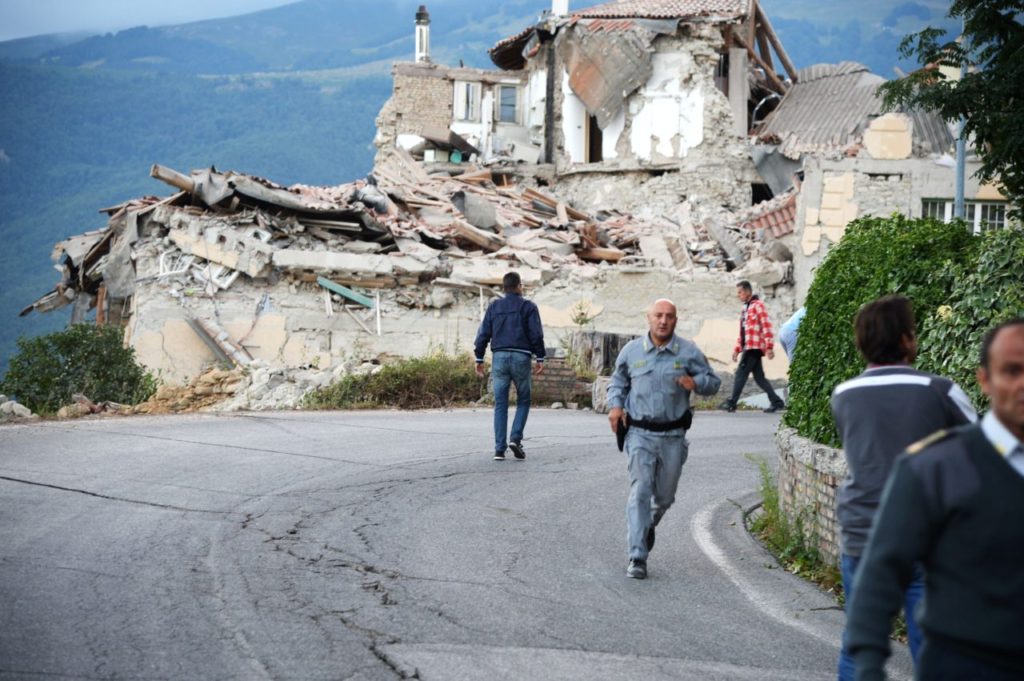 Victims and rescuers walk among the rubble of houses after a strong heartquake hit Amatrice on August 24, 2016. (FILIPPO MONTEFORTE/AFP/Getty Images)

Residents responding to wails muffled by tonnes of bricks and mortar sifted through the rubble with their bare hands before emergency services arrived with earth-moving equipment and sniffer dogs. Wide cracks had appeared like open wounds on the buildings that were still standing.

The national Civil Protection Department said some survivors would be put up elsewhere in central Italy, while others would be housed in tents that were being dispatched to the area.

Italian Prime Minister Matteo Renzi said he would visit the disaster area later in the day: “No one will be left alone, no family, no community, no neighborhood. We must get down to work .. to restore hope to this area which has been so badly hit,” he said in a brief televised address.

The quake hit during the summer when the area, usually sparsely populated, hosts large numbers of holidaymakers.

A spokeswoman for the civil protection department, Immacolata Postiglione, said the dead were in Amatrice, Accumoli and other villages including Pescara del Tronto and Arquata del Tronto. She put the initial death toll at 38, but said rescue teams had only just reached some stricken areas.

The earthquake caused damage in three regions — Umbria, Lazio and Marche — and was felt as far away as the southern Italian port city of Naples. 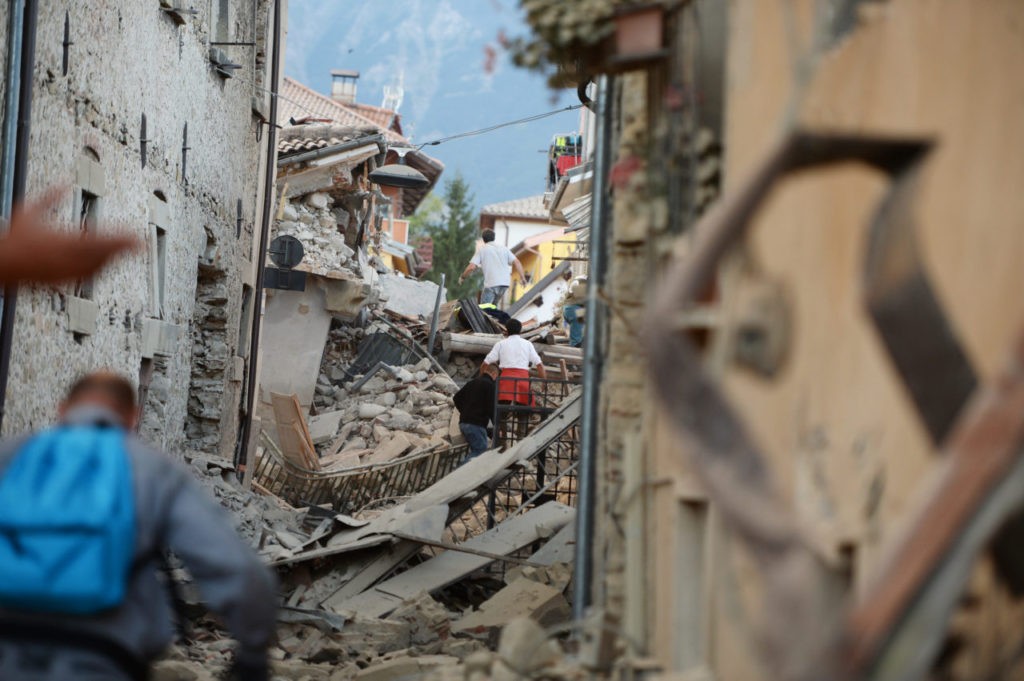 The hospital in Amatrice was among the buildings that were badly damaged, and patients were moved into the streets.

“Three quarters of the town is not there anymore,” Amatrice mayor Sergio Pirozzi told state broadcaster RAI. “The aim now is to save as many lives as possible. There are voices under the rubble, we have to save the people there.”

RAI reported that two Afghan girls, believed to be asylum-seekers, were also missing in the town.

The U.S. Geological Survey, which measured the quake at 6.2 magnitude, said it struck near the Umbrian city of Norcia, while Italy’s earthquake institute INGV registered it at 6.0 and put the epicenter further south, closer to Accumoli and Amatrice.

The damage was made more severe because the epicenter was at a relatively shallow 4 km below the surface of the earth. Residents of Rome were woken by the tremors, which rattled furniture, swayed lights and set off car alarms in most of central Italy. 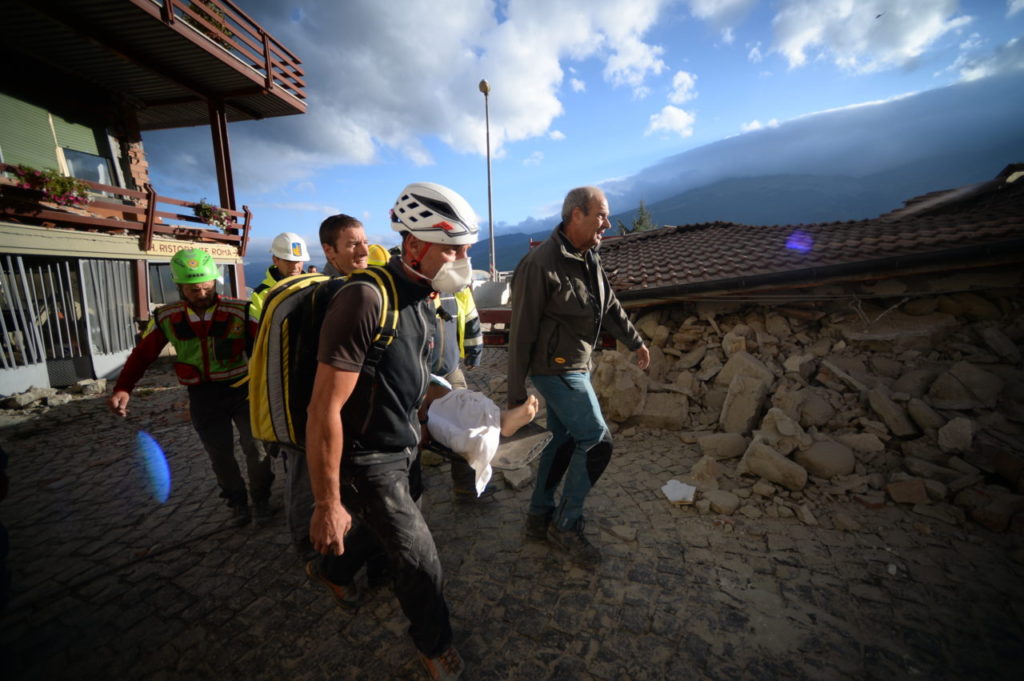 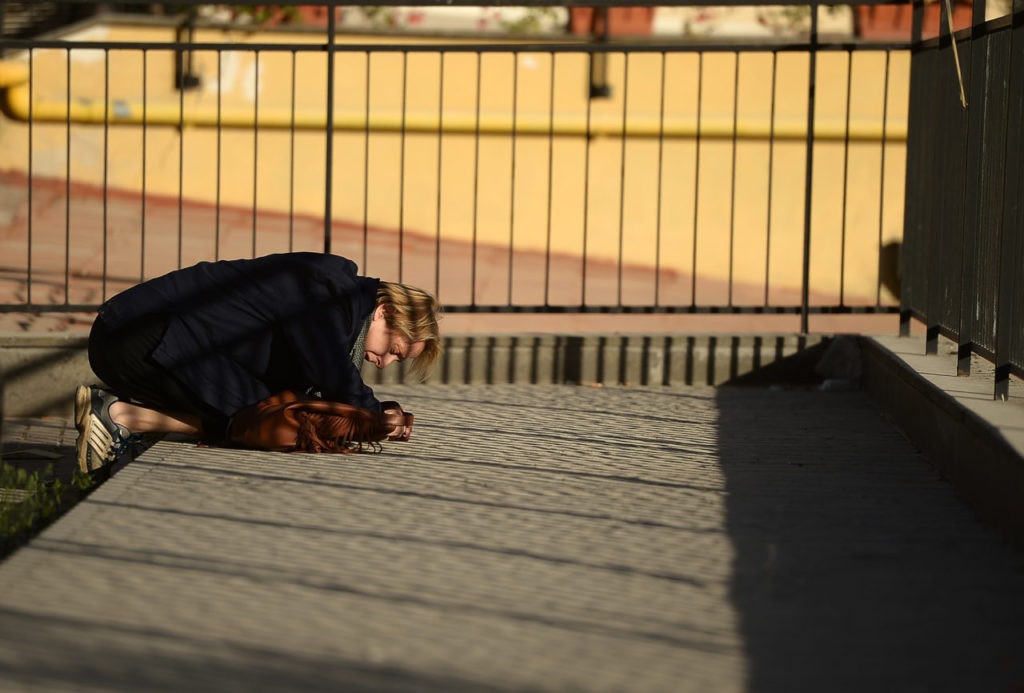 A woman reacts in front of her damaged home after a strong heathquake hit Amatrice on August 24, 2016. (FILIPPO MONTEFORTE/AFP/Getty Images)

“It was so strong. It seemed the bed was walking across the room by itself with us on it,” Lina Mercantini of Ceselli, Umbria, about 75 km away from the hardest hit area, told Reuters. Olga Urbani, in the nearby town of Scheggino, said: “Dear God it was awful. The walls creaked and all the books fell off the shelves.”

Italy sits on two fault lines, making it one of the most seismically active countries in Europe.

The last major earthquake to hit the country struck the central city of L’Aquila in 2009, killing more than 300 people.

The most deadly since the start of the 20th century came in 1908, when an earthquake followed by a tsunami killed an estimated 80,000 people in the southern regions of Reggio Calabria and Sicily. 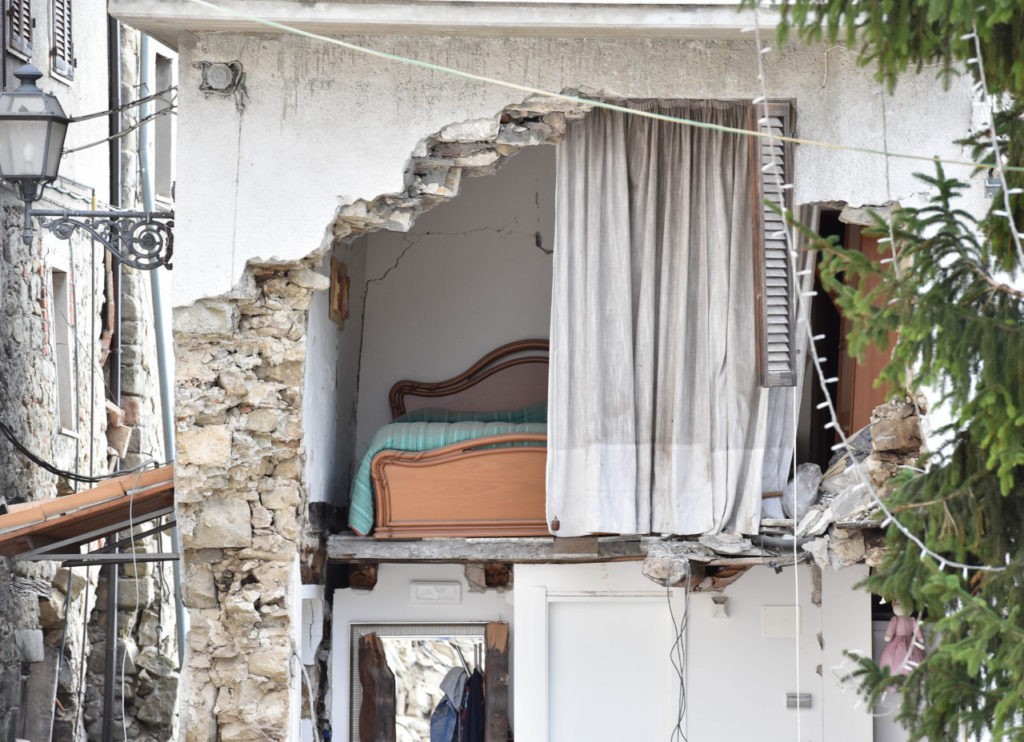