Accusing the President-elect and top members of his team of being under Russian influence, a Panorama documentary from the British Broadcasting Corporation’s (BBC) John Sweeney has gone big on last week’s Russian dossier allegations and created a narrative of Russian influence forging a fragile Trump-Putin “bromance”.

In ‘Trump: The Kremlin Candidate?’, Panorama called on expert witnesses including the Washington Post’s enthusiastic anti-Trump cheerleader Anne Applebaum and forecasts a violent presidency which may lead the world to nuclear war, because of Mr. Trump’s re-conciliatory approach to nuclear-power Russia.

Taking throw-away comments by Russian leader Putin such as “no-one believed that [Trump] would win, except for us” — as implied evidence of Russian control of the U.S. presidential election, the BBC gave significant airtime to the supposed intelligence dossier splashed by Buzzfeed and CNN last week. Despite repeatedly admitting that there’s no evidence to support the information and that “the dossier is completely unverified, Trump denies everything”, Sweeney leaves the question of the truth of the relationship between what he called the “butch sweethearts” open-ended.

Before cutting to the Democratic National Convention’s (DNC) private cyber security consultant Dmitri Alperovitch, who tells Mr. Sweeney that he had a “high degree of confidence this was indeed Russian intelligence” over the DNC hacks, he muses: “Is the dossier fiction, fact, or a bit of both? In the shadowy world of freelance intelligence, that is unknowable — for now.”

Building the narrative of Russian influence over President-Elect Trump, Sweeney notes that his secretary of state once had business dealings as an energy executive with Russia — one of the world’s largest energy exporters — and that his national security advisor General Michael Flynn once sat next to Vladimir Putin at a Russia Today dinner.

Turning to Stephen K. Bannon, Donald Trump’s Chief Strategist and Senior Counselor who is presently on leave of absence as Breitbart’s Executive Chairman, Sweeney admitted the BBC had been unable to dig up any evidence of business dealings with Russia. Panorama instead reported that the Kremlin’s influence was exerted through a mutual dislike of Islamic State. 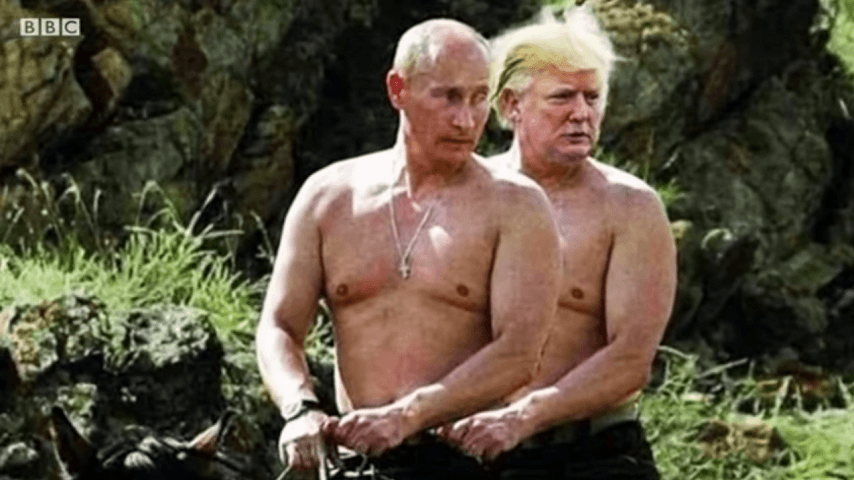 Still from the Panorama documentary shows a photo-shopped photomontage broadcast by the BBC of Vladimir Putin and Donald Trump riding a horse together. Through the programme and accompanying article in the BBC’s in-house magazine the Radio Times Sweeney repeats the idea of the men as comic book villains in a “geobromance” / BBC

Speaking to Panorama‘s John Sweeney, a former director of the CIA intelligence agency, which President-Elect Trump called out in his press conference last week, suggested Trump “is playing into Russian hands here”, before implying he was Russia’s “useful idiot”. As to whether the Kremlin “may have” damaging information on Trump acquired through espionage, former director John McLaughlin concluded, “I think it prudent to assume that is the case”.

Despite the narrative of a significant relationship between the Trump campaign and the Kremlin the BBC created in the Panorama programme, there was also a substantial focus on the idea this would create more instability and conflict, not less over the course of the Trump presidency. Journalist Anne Applebaum told Panorama that despite Trump’s hope to broker a nuclear disarmament deal with Russia once in office, he would bring the world closer to nuclear war. She said:

“I think democracy is in trouble. I think the example Trump set in the way he conducted and ran his election campaign, his use of open lies, fake news, the hint of violence, I think all of this is incredibly damaging for democracy… I haven’t been sleeping well since the invasion of Crimea.

“I have since then began to worry what Russia’s aims are in Europe, and about the possibility of a nuclear or conventional clash of an incredibly dangerous kind in the Baltic states, in central Europe, and Ukraine. Having Trump in the White House does not make me feel better.”

Doubling down on the nuclear war scaremongering, Sweeney concluded with the same message — that despite all indications to the contrary, war was coming. He said:

“Whatever the truth, Trump is locked in a strange embrace with Vladimir Putin. An ally that could so easily become an adversary. If the bromance ends and Donald Trump falls out with President Putin, to put it mildly, that’s not good. We face the prospect of a grand new Cold War, colder than ever before.”