The Prince of Wales is going to write a Ladybird book about the perils of climate change.

When I first read the headline on Twitter I thought this sounded like a perfectly splendid and hilarious idea – albeit a slightly cruel joke at the hapless Prince’s expense. 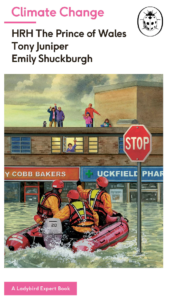 Ladybird has been doing a lot of ironic, spoof texts for adults, recently, with comical titles like The Ladybird Book of the Hangover; Five Go On A Strategy Away Day; The Midlife Crisis; the Ladybird book of the Zombie Apocalypse; and The Hipster.

A book on Climate Change by a pampered, deluded prince who has a valet to squeeze his toothpaste onto his toothbrush, drives a bio-fuel-powered Aston Martin and who predicted more than a 100 months ago that we had just 100 months left to save the world from ManBearPig sounded to me like a perfect fit for the series.

Perhaps I ought first to explain for the benefit of non-British readers what a Ladybird book is and why it occupies such an important place in our national psyche. Essentially it’s our literary equivalent of Sesame Street: Ladybird books taught many of us to read.

I myself learned to read using the Peter and Jane Ladybird series. Peter and Jane were the products of a wholesome pre-feminism-style nuclear family: Mum did the housework and shopping; Dad went out to work and even possibly smoked a pipe and had his supper waiting for him when he got home. They had a dog called Pat. See the dog. The dog likes the bone. Pat likes the bone. Pat is the dog. Something like that.

After Peter and Jane you would graduate to the more generalist Ladybird easy-reading  books, with titles like The Soldier (part of the People at Work series), The Elves and the Shoemaker (Well-loved Tales series), The Story of Railways (a Ladybird ‘Achievements’ book), Warwick the Kingmaker (from the Adventure from History series) and so on.

Anyone in Britain aged from about 35 upwards remembers these classics very fondly and was very sad when the series more or less petered out in the Nineties and Noughties.

But then came the Ironic Revival.

It started with We Go To The Gallery – a series of illustrations by painter Miriam Elia in which Peter and Jane try to make sense of modern art. This ended in disaster for Elia who was brutally squished by the publisher’s copyright lawyers.

Meanwhile, on the internet, various spoof Ladybird covers appeared, among them My First Joint, The Story of Gay and The Ladybird Book of Hallucinogenic Drugs.

Then Penguin the publisher which owns the Ladybird imprint got in on the act by producing its own pastiche series called Ladybird for Grown Ups, in which comedy scriptwriting duo (Paddington) Jason Hazeley and Joel Morris , devised silly new stories to accompany the original Ladybird artwork.

Here is an extract from their book on The Husband:

How It Works: The Husband

He can remember football scores, all his old car number plates and most of the film Withnail And I. But he cannot remember what his wife asked him to bring back from the shops. This is because his brain is full up, not because he was not listening. 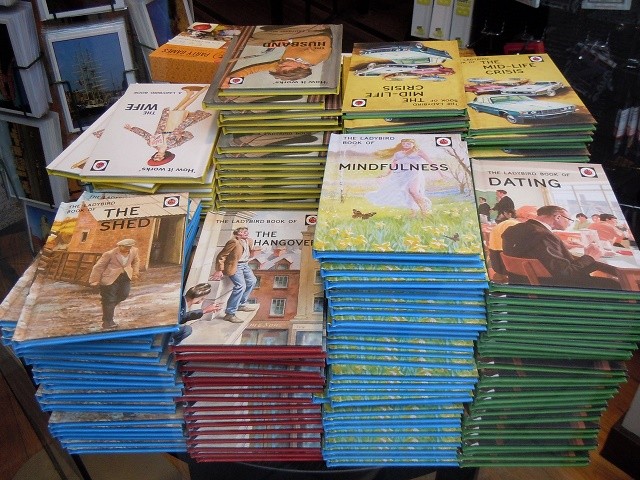 The series has been a massive publishing success, having sold 3.5 million copies since 2015. The Prince of Wales’s book on Climate Change – unwittingly sending up the absurdity of the dwindling band of deluded dweebs who imagine that man-made global warming represents any kind of plausible problem – would have been a perfect fit.

But no. Turns out that Penguin actually mean us to take the Prince of Wales’s drivel – co-written with Tony Juniper (formerly head of the hard-left pressure group Friends of the Earth) and Emily Shuckburgh (a scientist wheeled out to promote climate change at every opportunity because she’s at Cambridge and she’s hot) – seriously.

We know it’s drivel because the cover art is a watercolour reproduction of a news photo from October 2000 showing an emergency team in a rubber boat rescuing people from a flooded English high street. Since there is very little evidence  that any of Britain’s floods are the result of climate change – rather than, say, part of the ebb and flow of natural weather patterns, probably exacerbated by things like EU environmental policy preventing the maintenance of rivers and actively promoting flood plains – it seems a jolly dishonest way to promote a supposedly serious science book for adults.

Especially one which, according to the publisher, has been “peer-reviewed” by “experts” [from the parti pris Royal Meteorological Society – which tells you all you need to know, really] to the point where it is allegedly “bullet-proof.”

Perhaps Climate Change will sell, either because people mistake it for one of the funny books or because of its royal connection. 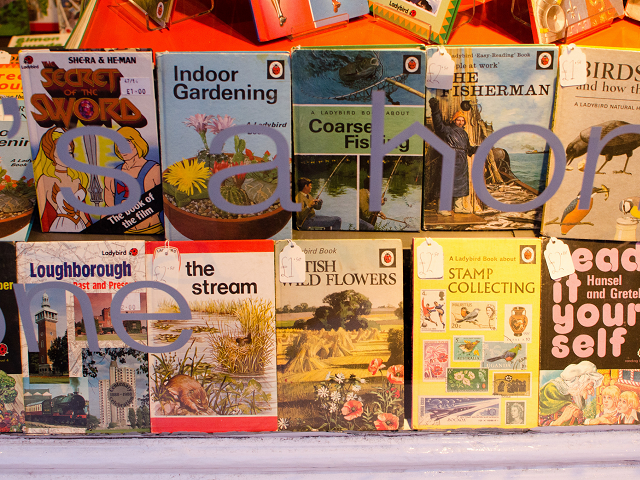 But while it may be a canny move for the publisher, it’s not such a smart decision by the Prince of Wales who appears to have forgotten – not for the first time, it must be said – that he is heir to the British throne and required by the custom of constitutional monarchy not to meddle in politics.

Climate change has almost everything to do with politics  – a fact emphasised by the Prince’s desperately unfortunate choice of co-author. Tony Juniper is a green activist; while at the vigorously anti-free-market, anti-growth Friends of the Earth he led the successful campaign to insinuate the disastrous Climate Change Bill into the Queen’s Speech – thereby acting as enabler for some of the most expensive and pointless legislation in UK parliamentary history, the Climate Change Act which will cost the taxpayer around £19 billion every year till 2050 in ‘decarbonisation’ projects.

Given that the climate change scare is being made to look more and more foolish by the day, it’s bizarre that the heir to the British throne should continue so assiduously to promote it.

Either Prince Charles needs to learn a degree of self-restraint – or get himself some wiser counsellors, pronto. His mother, Her Majesty the Queen isn’t going to stay on the throne forever. More’s the pity.