Labour’s candidate in the Stoke-on-Trent Central by-election has told UKIP’s leader and candidate for the seat to stop speaking up for Brexit and “sod off back to where he came from”.

The aggressive rhetoric comes after Breitbart London revealed how left-wing activists attacked a group of UKIP members canvassing in the area, ripping rosettes from their jackets and telling them, “You’re not welcome on our streets”.

Labour candidate Gareth Snell also claimed UKIP’s Paul Nuttall was not interested in local concerns and was only standing in Stoke “to make his name”.

Mr. Snell has framed himself as a “local man”, despite the fact he grew up nearly 200 miles away in affluent Suffolk and described himself as “still a Suffolk-boy at heart” in 2011.

Liverpudlian Mr. Nuttall, meanwhile, has attacked Labour as middle class and out of touch. He explained he feels “right at home” in Stoke as he understands “working-class communities of the Midlands and the North” due to his background. 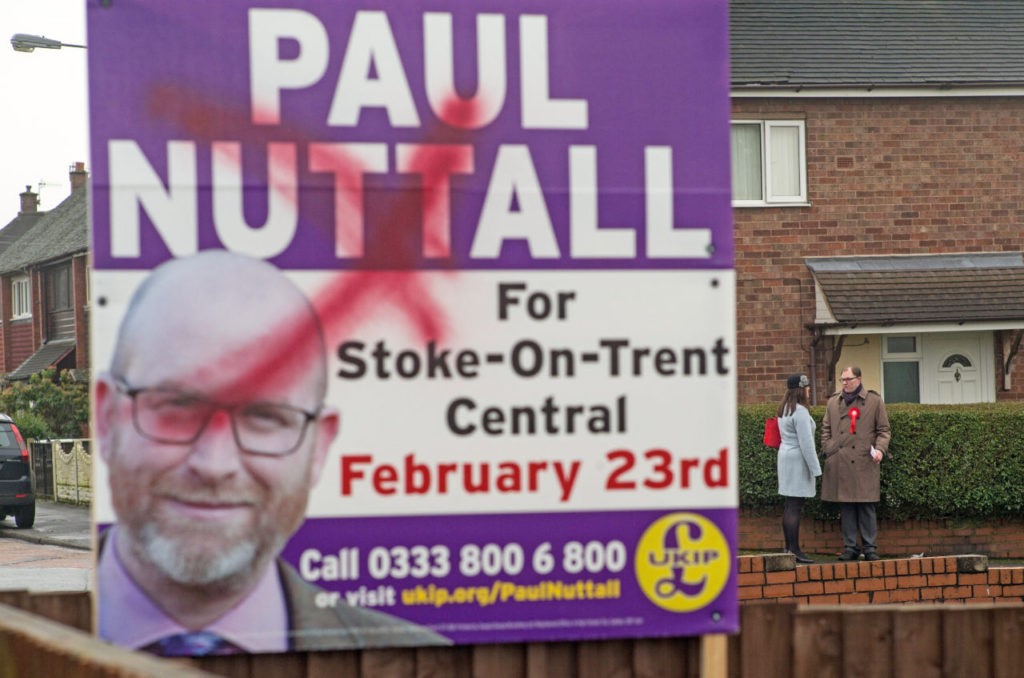 A defaced UKIP campaign poster in a garden as Labour’s candidate for the Stoke-on-Trent Central by-election Gareth Snell and Stoke North MP Ruth Smeeth campaign on the doorsteps of homes in Bentilee on February 8, 2017 in Stoke on Trent, England. (Christopher Furlong/Getty)

Speaking to the Mirror, Mr. Snell said: “If someone can tell me he has a genuine love for The Potteries I will be amazed. There are plenty of campaigns he could have been involved when he was an MEP – he has not had any interest in them whatsoever.

“All of a sudden, because there was a big Leave vote and a timely parliamentary by-election, he wants to brand himself Mr. Stoke. Paul has come here to make his name, I came here to make my life.

“So far all he has talked about is his own prominence as a national politician and how as the leader of UKIP he can do things in Parliament that no-one else can.

“Well, if he’s only interested in being the leader of UKIP in Parliament he should take his bags and sod off back to where he came from.”

He added: “He’s been sent packing from other parliamentary constituencies. Win or lose, I’m not going anywhere whereas I suspect if Paul Nuttall loses, come February 24 he will be on the first train back to Liverpool.”

Almost 70 per cent of the Labour city voted to leave the European Union (EU), one of the highest proportions in the country, leading to Mr. Nuttall branding the area “the Brexit capital of the UK”.

However, in his interview with the Mirror, Mr. Snell criticised his rival for focusing on the area’s enthusiastic support for Brexit.

“For too long Stoke has had a reputation as being somewhere that is on the decline, and that’s wrong because actually the city has an awful lot to offer,” he said.

“We’ve got so much going for us but that will be overshadowed if we have a UKIP MP that says, ‘It’s all about Brexit and that’s why I’m your MP’.”

Mr. Snell, who backed Remain and once attacked Brexit as “a massive pile of sh*t”, insisted he would not block Brexit in Parliament.

“I recognise the vote we had in the referendum was quite strong for Leave here,” he said.

“We’re a democratic party and we have to respect what the wishes of our voters are. Jeremy got it right.”