In their reporting and social media coverage, Britain’s Daily Telegraph has strongly implied Islamist Khalid Masood went on a killing spree in central London because he’d once been a victim of racism in the past.

‘First picture of Khalid Masood reveals how he went from football-loving teenager to London attacker’ — the Telegraph article, which seeks to make sense of the murder with the very little information about the individual presently available to the general public, relies heavily on details of a conviction of Masood dating back to 2003.

Reporting an incident where Muslim convert Masood stabbed a cafe owner in the face with a knife, the Telegraph reports: “Masood, may have eventually snapped because of racism in his village”. This is based upon Masood’s own account of why he attacked a neighbour in a picturesque East Sussex village, when he told Hove crown court that villagers had “ostracised” him.

Why they’d do a thing, given his response, one can only imagine.

While this was merely his claim in defence of a presumably disfiguring attack on a shopkeeper, the Telegraph‘s social media output amplifies the certainty of the claim by stating, matter-of-factly: “London attacker Khalid Masood snapped because of racism in his village”. 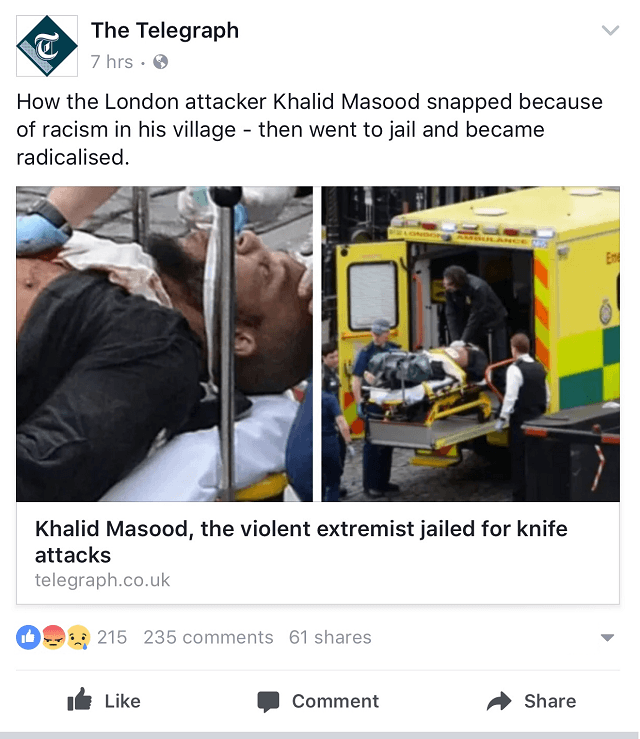 The implication of the article, that Masood’s life was normal until the early 2000s and was totally thrown off the rails by an argument with “racial overtones” in the village stores, is a nonsense, and doubly so given how little we actually know.

By furthering this idea, the Telegraph are falling for the leftist thought-trap of Structuralism, that societal forces can push people into crime and this is something ‘victims’ of these forces have no control over. This logic denies individuals — like Masood — their agency by absolving them for personal responsibility for actions.

It is so often the case that we are told that people from disadvantaged backgrounds are pushed into petty crime by bad schools, or that majority migrant neighbourhoods show a higher propensity to criminality purely because they are poor. The same logic is so often applied to terrorists — Islamist killers — because they have apparently experienced alienation and Islamophobia.

This pushes responsibility for these despicable acts from the shoulders of killers onto those of normal Western folks who just aren’t caring and welcoming enough to love-bomb the kill instinct out of religious fanatics. These ideas deny the very real free will of all humans to do good or bad regardless of their upbringing and environment, but which is sadly sometimes turned to terrorism.

So, who was really responsible for Wednesday’s attack? Khalid Masood, or the people of Northiam, East Sussex. The Telegraph seem to have made their minds up.