Swedish businesses in the Stockholm no-go zone suburb of Husby have been left feeling helpless to vandalism and robbery as no security firm will accept a contract to patrol the town centre.

The local government promised that by April there would be security guards in the centre of Husby in order to mitigate the violence and vandalism that is common in the area.

At the end of 2016, shopkeepers in the area kept their shops closed to protest the ongoing chaos but now it looks increasingly unlikely the promised security guards will ever come, Stockholm paper Mitt i Stockholm reports.

“Nobody dares to watch Husby centre. The businessmen are left in the ditch,” said Salam Kurda, local grocer and chairman of the corporate association in Husby. Whilst there have been CCTV cameras set up in the area, the local business owners say it is not enough.

“We have been screaming for years that there is chaos in our area. It’s a deserted area. It feels like this, with the guards, was just propaganda,” Kurda said, adding that he is giving up on the area entirely and plans to close his shop and move elsewhere.

“I will continue as a wholesaler and businessman, but I also intend to engage politically for the Moderates. There are questions that I can push about Järva and hope to wake up the rich politicians.” 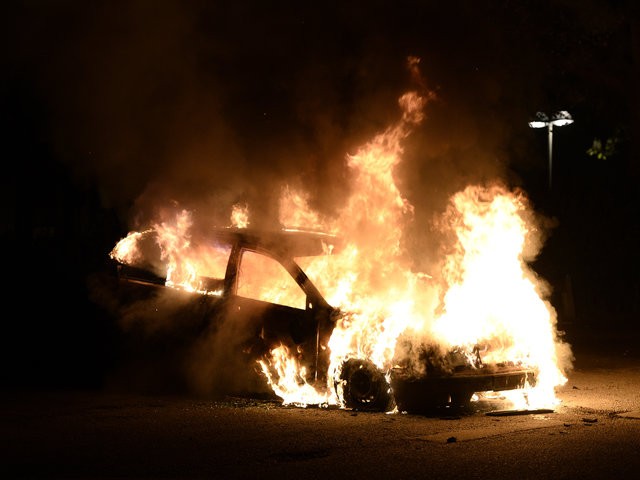 Firemen extinguish a burning car in Kista after youths rioted in few different suburbs around Stockholm on May 21, 2013. Youths in the immigrant-heavy Stockholm suburb of Husby torched cars and threw rocks at police, in riots believed to be linked to the deadly police shooting of a local resident. (Photo: JONATHAN NACKSTRAND/AFP/Getty Images)

Husby, along with the Stockholm suburbs of Rinkeby and Tensta, are known as some of the most notorious no-go zones in Sweden where police are often attacked, cars set on fire, and local shops smashed and looted during riots.

Attacks have not just been limited to police, as last year a Norwegian television crew was attacked in the area by young migrant men whilst filming an interview with economist Tino Sandandaji. One reporter described the scene as a “war zone”.

Breitbart London Editor in Chief Raheem Kassam visited Husby and other no-go areas across Europe and North America and discusses them in detail in his new book No Go Zones: How Sharia Law Is Coming to a Neighborhood Near You available now.