A Muslim apostate and high profile campaigner against both female genital mutilation (FGM) and forced marriage has been suspended from micro-blogging platform Twitter, amidst a wider crackdown on right wing voices on the website, and other online platforms like Facebook.

Twitter users noticed the prolific writer and campaigner had vanished from the platform Friday. Hobbs had previously spoken at the Unite Against Hate ‘Gays Against Sharia’ march in Manchester, where she spoke out against Muslim rape gangs preying on young white girls.

Hobbs turned away from Islam after escaping an arranged marriage with a physically abusive husband she had been forced into aged 18.

Speaking to Breitbart London, Ms. Hobbs confirmed she has been suspended indefinitely.

“It’s absolutely disgusting,” she told the website. “There was no reason given. Twitter would not tell me what tweets were in violation of their rules. They said it was because of ‘harassment’.

“All I tweet about is the rape of Pakistani children by Pakistani men,” she said.

She appealed directly to Twitter which has so far rejected her petition, and condemned the platform for shutting down a voice raising awareness of child sexual abuse in Pakistani British communities.

“No one speaks out against the rape of Pakistani children,” she said.

Suspended for so-called harassment, Ms. Hobbs told Breitbart London that she is frequently called “racist” and accused of being “full of hate” for calling for the jailing of parents who subject their daughters to genital mutilation.

“I get the biggest amount of hate from Pakistani men and ‘feminazis’ who tell me I’m ‘fueling the far right’.

“I’m trying to put a stop to these harmful practices. I’ve had more love and acceptance from the so-called ‘far right’ than from the Pakistani community,” she asserted.

Ms. Hobbs confirmed that someone is now tweeting on her behalf via @notshaziahobbs in order to allow her to continue her campaigning work against child abuse and child rape.

The truth hurts someone, somewhere. pic.twitter.com/yLLrYK6GBC

The suspension of the Scottish anti-FGM campaigner comes just weeks after Twitter arbitrarily suspended Breitbart London Editor in Chief Raheem Kassam, days after he announced the forthcoming publication of his new book on immigration and Islam, No Go Zones: How Sharia Law Is Coming to a Neighborhood Near You.

Hobbs is the author of a fictionalised autobiographical work, The Gori’s Daughter, in which she describes the experiences of growing up as the mixed-race daughter of a Pakistani immigrant father and a Scottish, Catholic mother. 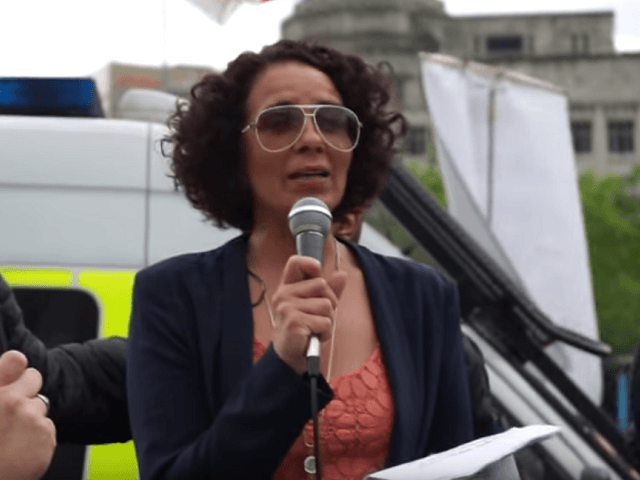 Scotland’s Daily Record newspaper reported her remarks at the time of the launch of the book, when she described living with her Pakistani father, his Pakistani wife, and her Scottish mother, who all lived together with the 11 children the two women had borne him. She said: “For the first few years, even I believed I had two mums and didn’t know any different.

“My mum was a white Catholic Glasgow girl who met my dad at a party. He had come over from Pakistan where he already had a wife and a number of children.

“For four or five years, my mum and dad lived together and had two children of their own. Then, when my mum was pregnant with me, my dad’s first wife came over from Pakistan.

“I don’t know what she knew of my mum but my mum had always known about her and we all just lived together.

“There were times when both women were pregnant to my dad at the same time.”

Victoria Friedman contributed to this report.