A British MEP and the Labour Party’s leading man in Brussels, the home of the European Union, has announced he will be supporting Belgium in Thursday’s World Cup match against England.

Richard Corbett, a fierce opponent of Brexit, also described the World Cup as “a vulgar tournament to prove our superiority”, writing on his blog, adding: “Come on Belgium!”

He is the representative in the European Parliament for Yorkshire and the Humber, which voted to leave the European Union (EU), and is currently pushing for a second referendum and for the UK to stay locked in the Single Market with open borders.

“No-one in politics can ignore such significant support for re-considering #Brexit…” he tweeted last week.

In the blog, he said: “I’m old enough to remember watching (as a very young boy) England’s victory in the 1966 World Cup final.

“At the time, I thought it was in the natural order of things that England should be world champions. I was fully expecting us to continue to dominate world football.”

He added: “By 2014, I was finally resigned to English failure. And now? Come on Belgium!”

Whatever you do, don't show this video to @EmilyThornberry. pic.twitter.com/W6mNctdD8H

Former UKIP leader Nigel Farage, who leads a Eurosceptic bloc in the European Parliament, has referred to Thursday night’s fixture as “Farage versus Verhofstadt”.

Guy Verhofstadt is a former Prime Minister of Belgium, the European Parliament’s Brexit negotiator, and a committed EU federalist who has clashed with Mr Farage before and mocked the England football team.

Mr Farage last month taunted Charles Michel, Belgium’s current leader, telling him his country supported the EU because “Belgium is not a nation, it’s an artificial creation”, according to The Times.

“Maybe that is why you’re happy to sign up to a higher European level,” he added.

Mr Verhofstadt hit back on Twitter, blasting: “He’ll see how real Belgium is when we play England in the World Cup.”

“If Belgium win Verhofstadt will be unbearable, so I have everything crossed for an England victory,” Mr. Farage added. 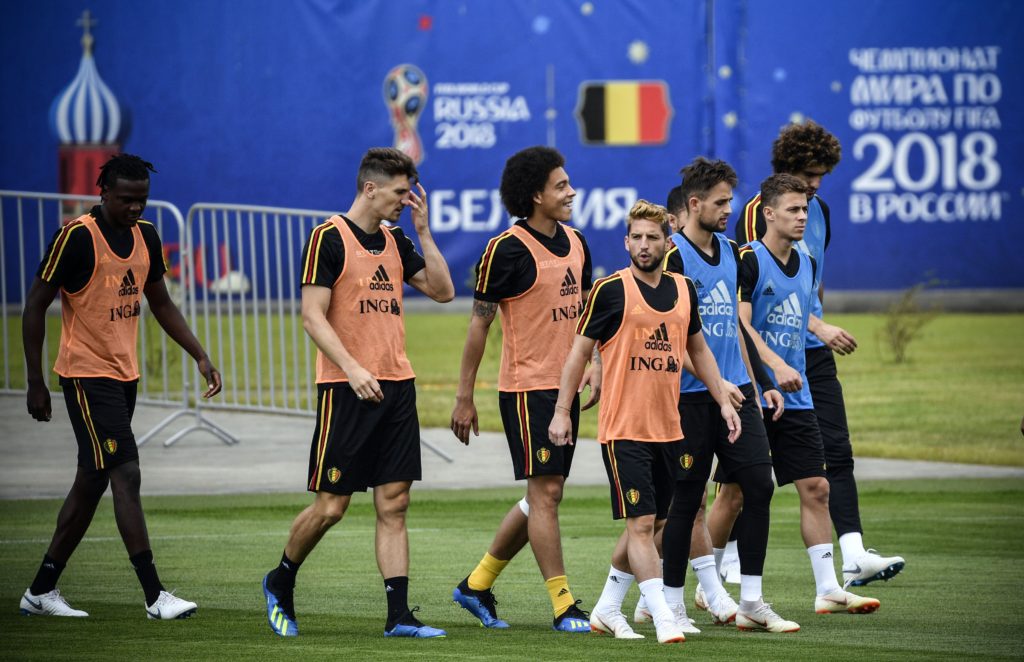 Belgium’s team players arrive for a training session of Belgium’s national football team in Dedovsk outside Moscow on June 26, 2018, ahead of the 2018 World Cup Group G Football match between England and Belgium. (ALEXANDER NEMENOV/AFP/Getty)