A study by the RAND Corporation has revealed that from 2004 to 2016, terrorism cost European Union countries £160 billion ($210bn) with France and the UK losing the most.

The report, which was prepared for the European Parliament, says that as a result of terrorist acts, the UK economy lost £38.6 billion ($51.1bn) following the 7/7 bombings in 2005, while France lost an estimated £38 billion ($50.3bn) within the same period that saw the 2015 Charlie Hebdo attacks and the Bataclan massacre later that same year, as well as a large number of other, smaller terror events.

“Besides the obvious physical devastation and emotional trauma, there is a negative impact on economic growth in the countries where these terrorist attacks take place. When you bear in mind the infrequent nature of terror events in Europe, the GDP losses that occur to national economies are notable,” senior RAND economist Marco Hafner said. 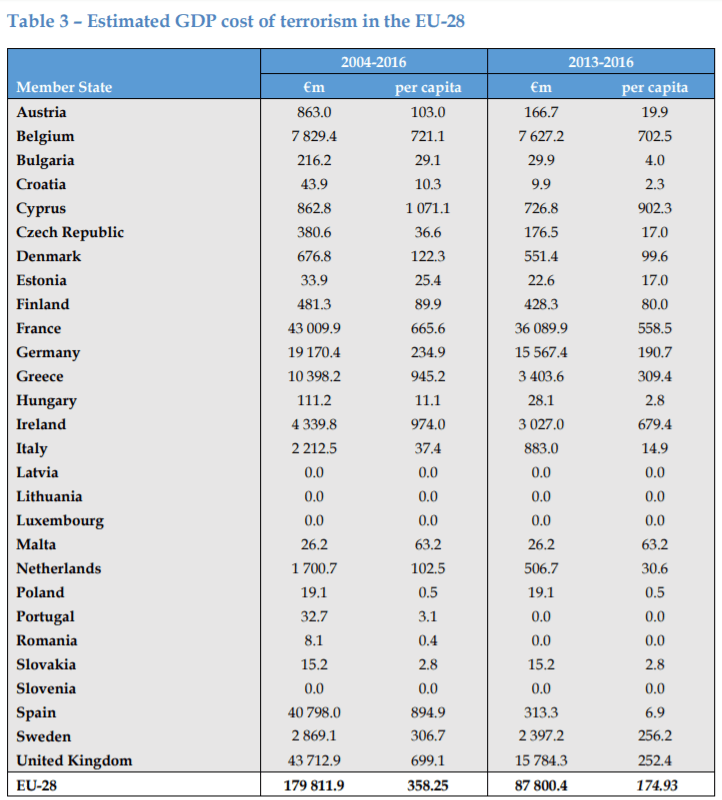 Mr Hafner added that terrorism can also have an impact on the psychology of people and companies and may change their spending habits. The phenomenon was clearly seen in places like Paris, where following the 2015 terrorist attacks, tourism to the French capital dropped significantly.

“Some people may value their future less and ‘live in the moment more.’ These effects can impact how people consume and save, potentially leading to an increase in consumption and decrease in savings and investment rates by companies. The end result is economic losses across Europe,” Hafner said.

RAND noted several potential policies to curb terrorism including strengthening ties between European law enforcement agencies but noted some of the recommendations “could have implications for human rights legislation and data protection across the EU”.

One major policy proposal from the think tank was to counter terrorist financing. Earlier this year, French investigators were able to identify 416 financial donors to the Islamic State terror group.

Paris prosecutor François Molins noted the large number of “micro-transactions” used by Islamic State supporters and security services claimed the group may be sitting on as much as £2.7 billion in cash.