Police are to investigate shocking alleged anti-Semitism cases in the Labour Party as “hate crimes” and racism, including calls for Jews to be killed en masse.

The cases were only brought to the attention of police after being leaked to the press, and the party has been slammed for moving slowly to investigate reports of anti-Semitism, with a huge backlog of cases.

A document seen by LBC details 45 members of the party who are accused of anti-Semitism, including allegations that a Labour councillor inflicted “ten years of hell” on a child by calling him a “Jew boy”.

Another Labour member posted Facebook comments including: “We shall rid the Jews who are a cancer on us all” and “as for the Jews, red see [sic] ideal destination no need for gas chambers anyway as gas is so expensive and we need it in England”.

Mak Chishty, who headed hate crime probes for the Metropolitan Police until last year, told the radio station four of the cases should face criminal investigation as hate crimes. 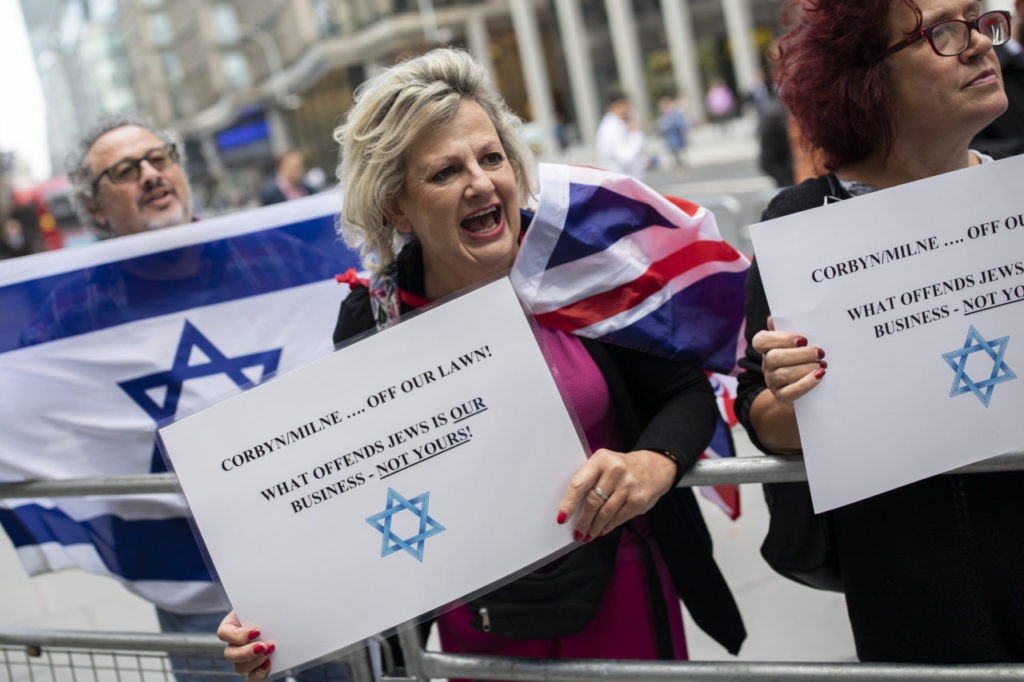 Demonstrators take part in protests outside a meeting of the National Executive of Britains Labour Party on September 4, 2018 in London, England. (Dan Kitwood/Getty)

“If somebody makes an allegation to us, absolutely we will take it seriously, we will scope it, we will see if a crime has taken place.

“The first instance, does it look like a crime, which is perhaps what Mak has done. I will pass this to my experts to deal with. We’ll see if a crime has been committed.”

Simon Johnson, the Chief Executive of the Jewish Leadership Council, slammed Labour leader Jeremy Corbyn for failing to deal with the shocking claims. He blasted:

“If so many of these cases are serious enough to be referred to the police and yet Labour is dragging their heels in dealing with them, then that clearly contributes to the complete lack of confidence that the Jewish community has in the way that Labour is dealing with these at the moment.

“If Jeremy Corbyn was a competent leader of the Labour Party, he would have already dealt with these cases of anti-Semitism months ago. He would have rid this party of the stain that now affects them.”

A Labour spokeswoman said: “The Labour Party has a robust system for investigating complaints of alleged breaches of Labour Party rules by its members.

“Where someone feels they have been a victim of crime, they should report it to the police in the usual way.”

However, Mr Corbyn was slammed for attempting to insert a 500-word clause allowing people to attack the foundation of the Jewish state of Israel as a “racist” entity.

Earlier in the week, party members re-elected controversial figures to the NEC, including candidates who are accused of anti-Semitism and backing Islamists.