Lancashire police have said their investigation into the flying of a “White Lives Matter” banner over a football match on Monday has found “no criminal offences”, despite the act causing outrage among top sporting celebrities.

The force released a statement Tuesday afternoon, which followed them announcing an investigation into a single-engine aircraft dragging a message banner over a football match between Burnley and Manchester which read “White Lives Matter Burnley!”.

Noting they had discovered no criminal offences to pursue, Lancashire police Chief Superintendent Russ Procter was quoted as saying in the statement: “Today Lancashire Constabulary has been in liaison with Greater Manchester Police, the Aviation Authority and the Crown Prosecution Service regards the ‘White Lives Matter’ banner that was flown over the Etihad Stadium last night.

“After assessing all the information available surrounding this incident we have concluded that there are no criminal offences that have been disclosed at this time. We will continue to work with our partners at the football club and within the local authority.” 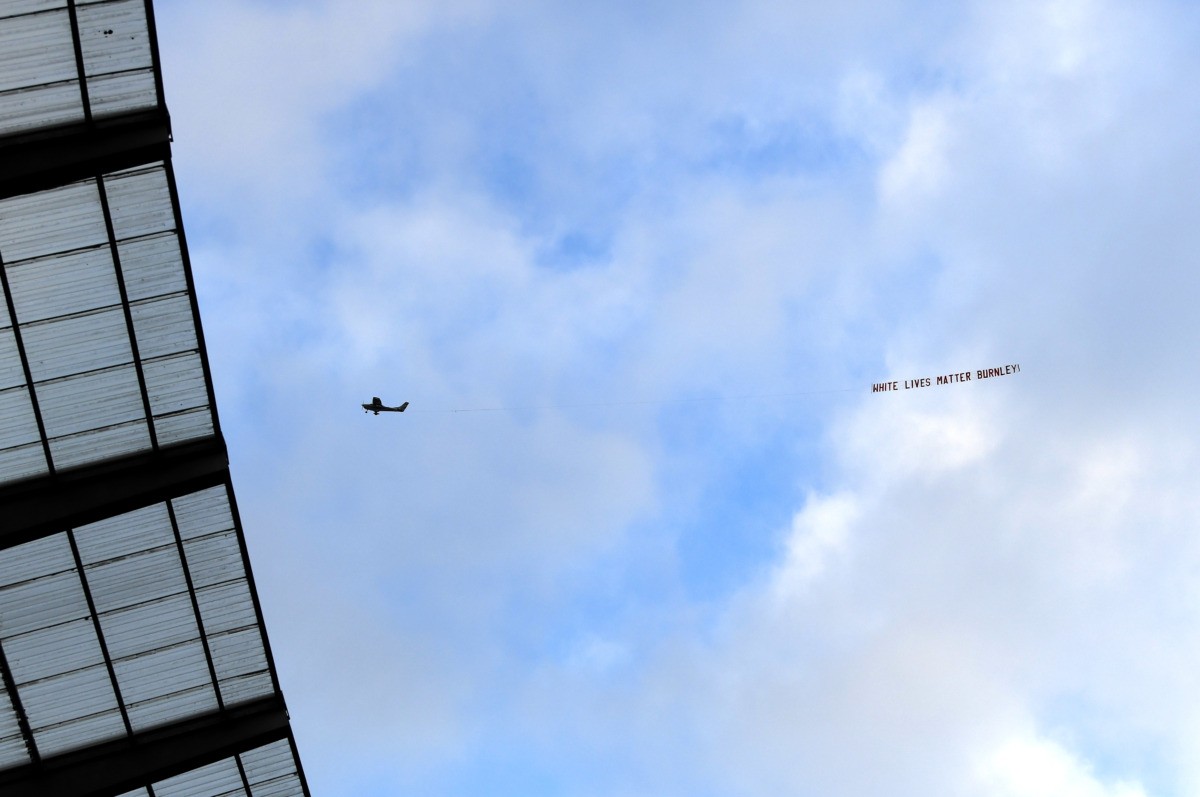 MANCHESTER, ENGLAND – JUNE 22: A plane flies over the stadium with a banner reading ‘White Lives Matter Burnley’ during the Premier League match between Manchester City and Burnley FC at Etihad Stadium on June 22, 2020 in Manchester, England. Football stadiums around Europe remain empty due to the Coronavirus Pandemic as Government social distancing laws prohibit fans inside venus resulting in all fixtures being played behind closed doors. (Photo by Michael Regan/Getty Images)

UPDATE: Following last night's incident where a banner was flown over The Etihad Stadium in Manchester at the Manchester City vs Burnley FC match we have issued an updated statement.
For more information go to: https://t.co/MD1ziJfKTZ pic.twitter.com/eB04W1PhR5

Earlier in the day when he announced the investigation would take place, the same officer said: “We are making full enquiries… We recognise that this banner will have caused offence to many people in Lancashire and beyond.”

The investigation by police into the protest flight came after a host of sporting personalities lined up to condemn the message. Anti-Brexit diehard, BBC top-earning pundit, and crisp salesman Gary Lineker — formerly a professional footballer himself — was particularly explicit in his disapproval, calling it “shithousery”. Burnley football club, who were namechecked in the banner, said they were “ashamed” and “embarrassed”.

The team captain even went so far as to blame his squad’s performance in the Monday football match, which they lost 5-0, on the banner, saying “It definitely had a massive impact on us to see that in the sky.”

Several UK newspapers have named the man behind the stunt as Burnley football fan Jake Hepple, who the club said would be banned from their games for life. In a message about his decision to have the plane fly over the match while players took a knee for Black Lives Matter, Hepple made clear his statement that White Lives Matter was in direct reference to the murder of three people in England on Saturday.

The attack, which is being treated by police as a terrorist attack, saw six people attacked with a knife. Three men died of their wounds, all of whom were subsequently revealed to be white males. A Libyan refugee has been arrested on suspicion of the killings.

Writing on his Facebook page, Hepple said of his view on the plane banner protest: “I’d like to take this time to apologise… to absolutely f***ing nobody!

“It’s now apparently racist to say White Lives Matter, the day after three white people got murdered in a park in Reading, but all we’ve seen on the TV is Black Lives Matter after George Floyd got murdered. What a mad world we live in.”

Suspected UK Terrorist Was Released From Prison Early and Known to MI5 https://t.co/PAyryduNnH