Military and civilian satellites destroyed by enemy forces in future wars will be replaced the next day, rather than months later, by allowing a rocket launch to piggyback off a modified airliner.

Launches of payload-carrying rockets will take place from a ‘spaceport’ in Cornwall from next year, with the process considerably simplified by taking the rocket slung underwing on a formerly passenger-carrying Boeing 747 to 35,000 feet.

The initiative, the end of an eight-year satellite launching project by Richard Branson’s Virgin Orbit team, will use a two-stage ‘LauncherOne’ rocket to get from commercial flying height to Earth’s orbit, reports The Times. Virgin claims that the process of putting satellites in space will be faster, with the rocket already in flight, hanging under the Boeing jet, before it even starts its engines. 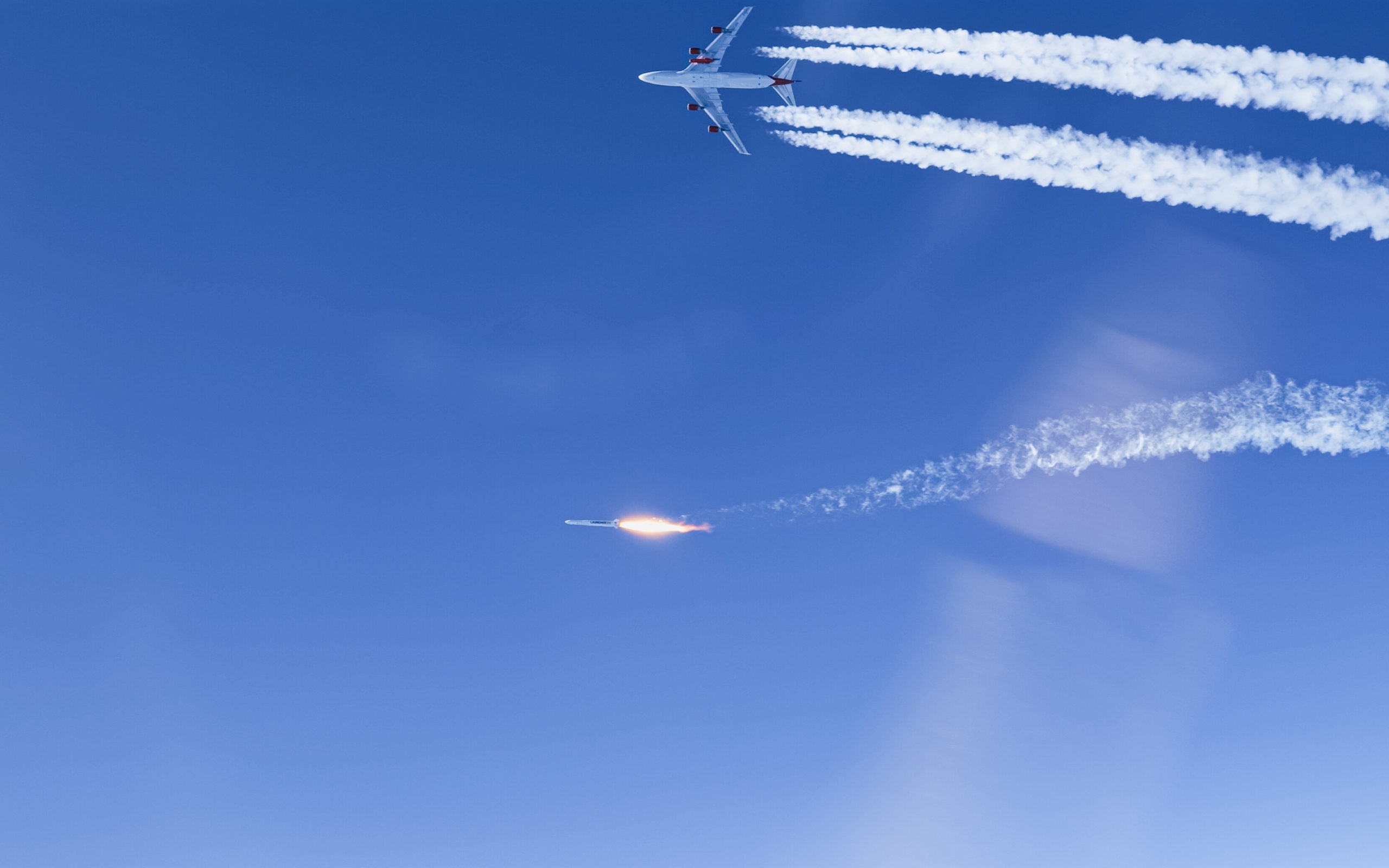 This is a major advantage to the military and civil sector, Virgin claims, because if navigation or observation satellites are destroyed or otherwise disabled in the course of a future conflict that escapes the bounds of the atmosphere and begins to target the infrastructure that supports modern civilisation — GPS and others in particular — they can be replaced quickly. At present, the report claims, preparing a new satellite for launch to replace one lost on a conventional rocket could take months. Piggybacking a smaller rocket with a Boeing 747 could be done “within hours”, and can be done from a regular airport.

This is an advantage for intense conflicts where conventional rocket launch facilities may be themselves targets for attack. Virgin Orbit says: “Virgin Orbit’s air-launched platform can take off from any runway long enough to handle a Boeing 747. This means that launch can be moved away from vulnerable, highly visible, fixed infrastructure sites… The Department of Defense calls this ‘tactically responsive launch’.”

Virgin’s modified Boeing 747 first carried its rocket payload in 2018 and has been tested in the United States since. Virgin launched seven customers’ satellites into orbit from the Mojave desert in June, one of which was a military satellite. It is due to commence satellite launches from the United Kingdom from 2022 and carry payloads of up to half a ton, depending where in space the satellites are due to be deployed.

The Times cites the remarks of Melissa Thorpe, the head of Britain’s Cornwall Spaceport, who said of the launcher: “Everything depends on accessing space and by creating a spaceport in the UK we are letting smaller companies and academia get into space when they’ve never been able to before.” The newspaper says the launch will make the UK the first European country to launch a rocket into orbit from Europe. The European Space Agency launches its rockets from South America.

Virgin, the record label launched by British music entrepreneur turned flight and space magnate Sir Richard Branson, has been among the foremost private companies in the new push for manned spaceflight pursued by other high-profile billionaires like Jeff Bezos and Elon Musk. While Bezos and Musk are relatively new entrants to space travel and have plunged considerable cash into the ventures, Virgin’s space programme has its roots in Branson’s high altitude balloon flights in the 1990s.

The left-wing, anti-Brexit billionaire Branson’s company has also concentrated more on space planes and takeoff assisted vehicles as a more efficient alternative to pure rocket flight, which may be perceived as more expensive and more prone to explode. Branson was the first of the billionaires to reach space earlier this year when his rocket plane ‘Unity’ reached a height of 282,000 feet with its owner onboard. He intends to sell tickets on the space flights in the future.