Prime Minister Ted Heath signed the treaty that took the United Kingdom into the EU on this day in 1972, a ceremony that was delayed after a protester threw a bottle of ink in the PM’s face as he arrived at the Egmont Palace.

Had it not voted to leave the European Union in 2016, the United Kingdom would very likely have been marking the 50th anniversary since the historic signing of the accession treaty in 1972 today, just as the Republic of Ireland — which joined on the same day and is still a member — has.

The United Kingdom joined the ‘European Community’, which included the European Economic Community (EEC), on January 1st 1973, following the signing of the Treaty of Accession on January 22nd 1972, 50 years ago today.

Treaty of Accession signed on 22 January 1972 by Ireland, United Kingdom, Denmark & Norway to pave the way for membership of the EEC #Brexit pic.twitter.com/npulLuKm6s

The document was signed on the same day as the UK by Ireland, Denmark, both of which remain members today, and Norway, which subsequently decided not to join and remains an independent state to this day.

In some respects, the grand signing ceremony for the treaty at Brussels’ Egmont Palace went about as smoothly as Britain’s actual membership of the bloc that would eventually transform from the EEC to the European Union. Outside, police made arrests as they broke up a protest by Eurosceptics opposed to Britain joining the bloc. Among those arrested that day was Christopher Frere-Smith, “the original Euro-sceptic” who founded the longstanding Get Britain Out campaign group and recognised, long before most, that the EEC was a political rather than economic project as claimed.

Once UK Prime Minister Ted Heath made it inside the palace itself he was attacked by a protester, although not one — it is claimed — motivated by UK-Euro politics. Amid the vivid polychrome marble of the grand Ambassador’s Staircase at the historic palace, a woman who had obtained false press credentials to stand among the pack of photographers threw a bottle of printer’s ink in the face of the Prime Minister. She was arrested and eventually sentenced to six months in prison.

It is claimed now that the assailant shouted “you damn homosexual” at Heath as she struck, a fact that did not make it into the papers at the time, given the Prime Minister’s sexuality was not discussed publicly and he was officially a “bachelor”. 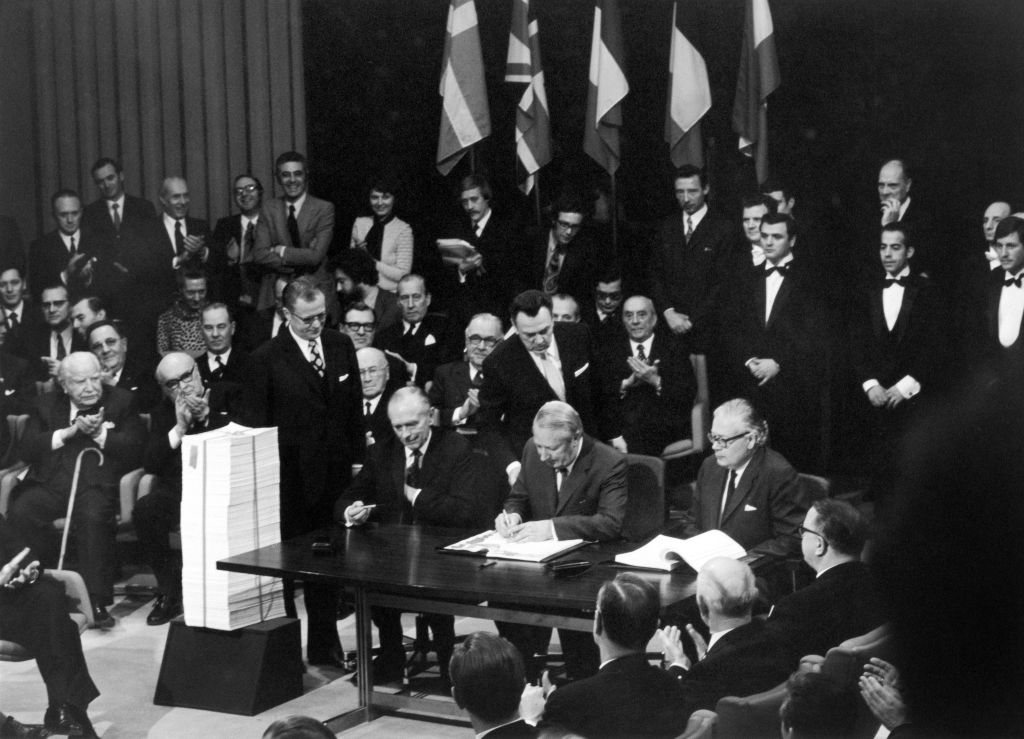 In all the signing ceremony was delayed by an hour as Heath returned to his hotel to change suits.

Of the four countries that signed up to the EEC on that day, the United Kingdom was the only one to not give its citizens a referendum on whether they actually wanted to go ahead and join the bloc or not. While the people of Denmark and Ireland voted in favour of the move in national referenda that year, the people of Norway voted against.

The British people finally got a vote in 1975, over two years after the treaty went into action, the move presented as a fait accompli to the British people by PM Ted Heath. The move was somewhat typical of Heath, who had worked for years, even before he became Prime Minister, to achieve Britain entering the European Community.

Britain’s ratification of the accession treaty, rather than being through a referendum, was by act passed through the Houses of Commons and Lords which passed into law as the European Communities Act 1972 on October 17th that year.

The much-discussed repeal of the 1972 act was the final pen-stroke by which Britain’s separation from the bloc.