Thousands of Muslim faithful gathered outside the historic Hagia Sophia site in Istanbul on Friday ready for the first prayers since Turkish authorities ruled the building’s rich Christian heritage could be overturned and the building reconverted into a mosque.

“Muslims are excited, everyone wants to be at the opening,” Istanbul Governor Ali Yerlikaya said as the city of 18 million people readied for the event, according to the BBC.

The excited crowd, some of whom slept overnight for the chance to enter the building and celebrate its conversion to a mosque, came less than 24-hours after Turkish President Recep Tayyip Erdogan unveiled a plaque to confirm the re-purposing of the historic building.

Erdogan insisted it was Turkey’s “historical and sovereign right” to make the change. 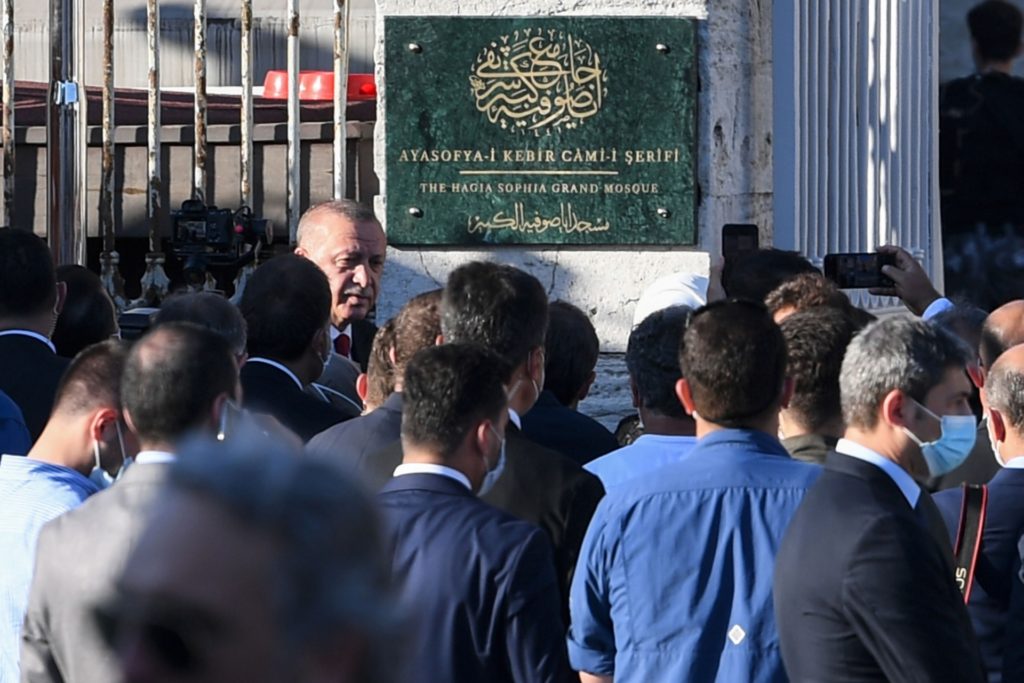 Turkey’s President Recep Tayyip Erdogan (C-L) unveils a newly installed plaque reading ” The Hagia Sophia Grand Mosque” as he visits Hagia Sophia during the preparations for the Friday prayer in Istanbul. The first prayers at Hagia Sophia since the Istanbul landmark was reconverted to a mosque will take place on July 23, 2020. Turkey’s top court paved the way for the conversion in a decision to revoke the edifice’s museum status conferred nearly a century ago. The sixth-century building had been open to all visitors, regardless of their faith, since its inauguration as a museum in 1935. (OZAN KOSE/AFP via Getty Images)

The colossal Hagia Sophia was built 1,500 years ago as an Orthodox Christian cathedral and converted into a mosque after the Ottomans conquered Constantinople, now Istanbul, in 1453.

The secular Turkish government decided in 1934 to make it a museum.

As Breitbart News reported, one week ago Erdogan formally declared it open for Muslim worship after a high court annulled the 1934 decision.

Erdogan, a devout Muslim, has frequently used the debate over Hagia Sophia to drum up support for his Islamic-rooted party. The decision has provoked deep dismay among Orthodox Christians.

Just hours before the first cries of the Muslim imams rang out, United States Catholic bishops joined the Greek Orthodox Church in proclaiming a day of “mourning and manifest grief” over the decision.

The U.S. bishops (USCCB) tweeted out an announcement of the Day of Mourning, embracing an invitation by the Greek Orthodox Church in America issued to “all Christians and people of goodwill to join in a Day of Mourning on July 24 for Hagia Sophia.” 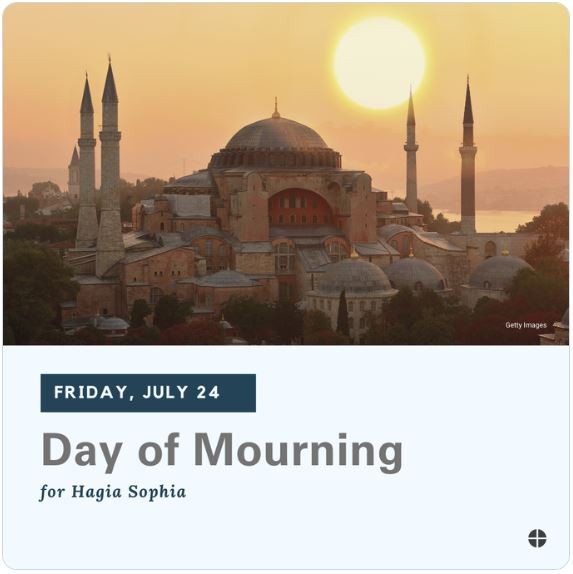 Turkey’s religious affairs minister, Ali Erbas, estimated some 1,000 people would be able to attend prayers at the site at any one time due to restrictions imposed by the coronavirus epidemic.

A turquoise carpet was laid on the floor to prepare for prayers and Christian relics covered up with white drapes or obscured by lighting.

Among the Christian mosaics expected to be obscured during Muslim prayer was the ninth-Century mosaic of the Virgin Mary and Jesus inside the apse.

Erdogan is expected to be among the worshippers on Friday, with some sources predicting up to 100,000 people will gather outside to listen as Muslim prayers echo from the 1,500-year-old monument. 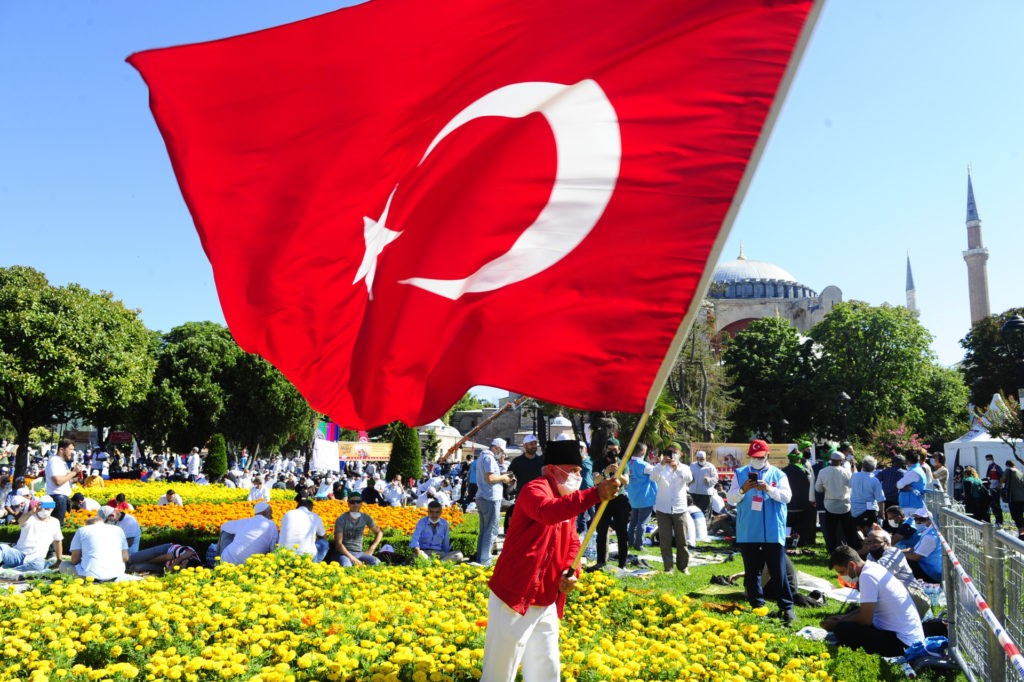 A man waves a Turkish flag outside the Byzantine-era Hagia Sophia, in the historic Sultanahmet district of Istanbul, Friday, July 24, 2020. The structure was once Christendom’s most significant cathedral and the “jewel” of the Byzantine Empire then a mosque and museum before its re-conversion into a Muslim place of worship. The conversion of the edifice, has led to an international outcry. (AP Photo/Omer Kuscu)