ROME — The Catholic Church and the French state commemorated Monday the fifth anniversary of the martyrdom of Father Jacques Hamel, whose throat was slit by two jihadists while he celebrated Mass on this day in 2016.

On Monday morning, the archbishop of Rouen, Dominique Lebrun, celebrated a special Mass in homage to the priest, who has been called “Europe’s first 21st-century martyr,” at the site of the assassination, the parish church of Saint-Étienne-du-Rouvray, in Normandy.

Following the Mass, the French state also held a ceremony in honor of Father Hamel, with the participation of Interior Minister Gérald Darmanin as well as the mayor of Saint-Étienne-du-Rouvray, Joachim Moyse.

“Islamist barbarism touches upon all the symbols that make up France. Doesn’t the murder of a priest in his church deeply touch the soul of France?” Darmanin said from the platform, after listing jihadist attacks that have struck the country in recent years.

“The barbarism with which we have been confronted for many years is a barbarism that it is difficult to fight as it has no nationality or religion,” he continued, adding that “this barbarity continues to kill at home and at all times.”

For his part, Archbishop Lebrun underscored the importance of the beatification process underway to declare Jacques Hamel a saint.

“How can we not emphasize the happy and providential choice of Pope Francis to exempt us from the 5-year waiting period before opening the beatification process that could one day officially recognize the martyrdom of Father Jacques Hamel,” the archbishop said.

“The pope thus allowed the depositions of all the eyewitnesses to be collected,” he continued. “As you know, the diocesan investigation has been completed, deposited in Rome and we have received recognition of the validity of this investigation. The rest is no longer in our hands.”

As Breitbart News reported at the time, on the morning of July 26, 2016, Islamic State members Adel Kermiche and Abdel Malik Petitjean entered the small Catholic church in Saint-Etienne-du-Rouvray as Father Jacques Hamel was celebrating Mass.

The attackers seized the priest and forced him to kneel before slitting his throat. Hamel’s last words were: “Depart from me, Satan!”

Two months later, Pope Francis declared the slain priest to be a Christian “martyr,” a qualification that automatically makes the person a saint in the Church’s eyes.

Without formally canonizing Hamel, Francis said that Father Hamel is in heaven, noting that “all martyrs are blessed (beati),” a technical term the Catholic Church uses for those who have been “beatified” or declared to be in heaven. 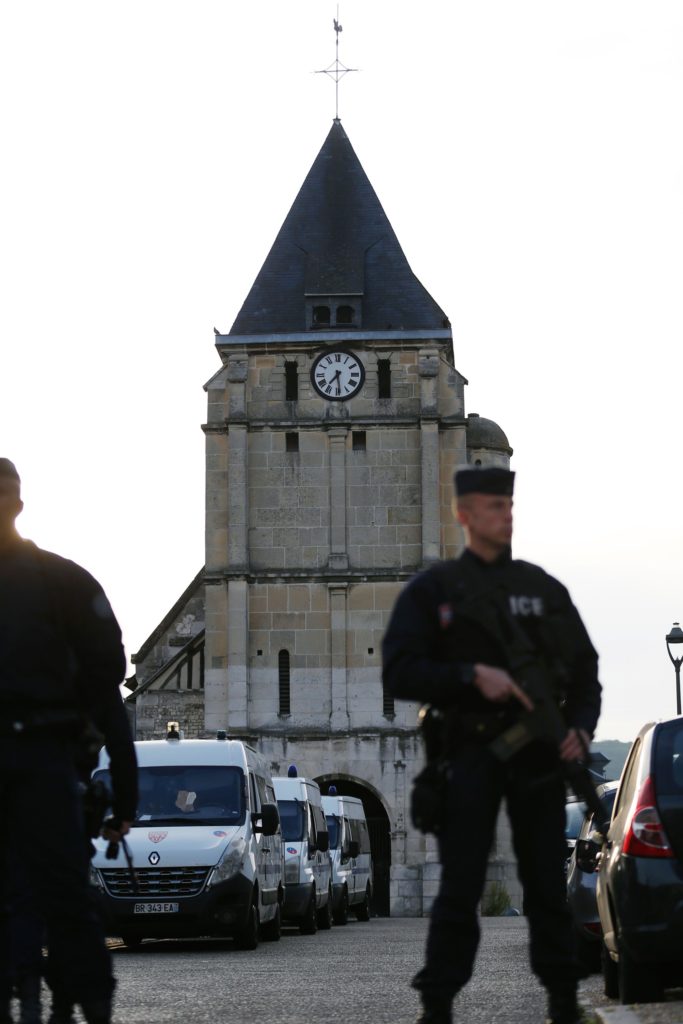 Police officers stand guard the Saint-Etienne church on July 27, 2016 in Saint-Etienne-du-Rouvray, 125 kilometres (77 miles) north of Paris. Father Jacques Hamel, a semi-retired assistant parish priest, had his throat slit in a church in northern France on July 26, 2016, after two men stormed the building and took hostages. (CHARLY TRIBALLEAU/AFP via Getty Images)

“You can put this photo in the church, because he is blessed now, and if someone tells you that you do not have the right, tell them that the pope gave you permission,” Francis told the archbishop of Rouen. He was referring to a photo of the deceased priest, which the Pope had signed.

“Today there are Christians murdered, tortured, imprisoned, slaughtered because they do not deny Jesus Christ,” he said, and Father Jacques Hamel “is part of this chain of martyrs.”