ROME, Italy — Pope Francis underscored the inviolable right to life from conception to natural death in an address to the Pontifical Academy for Life Monday.

People have gotten used to abortion, the pope said in his address in the Vatican, because they fail to look at the reality and see “it is really a murder.”

Abortion consists in “the disposal of children that we do not want to accept,” he said, meaning they are “returned to sender by direct killing.”

“This is abortion,” he said. 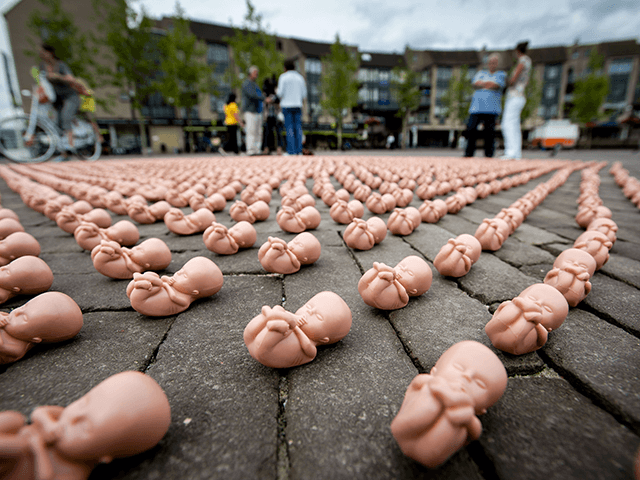 Hundreds of little plastic foetuses are displayed on a square in Houten, August 12, 2013. The Dutch Christian organisation Schreeuw om Leven (Scream for Life) has set up the action to protest against the establishment of a Centre for Birth Control, Abortion and Sexuality Rotterdam (CASA) in Houten. (Photo by ROBIN VAN LONKHUIJSEN/AFP via Getty Images)

It is important for the Church and the Academy for Life to “participate in common initiatives and, in appropriate ways, in the public debate,” Francis said.

“This naturally requires that, without ‘watering down’ the contents, we try to communicate them with a suitable language and understandable arguments in the current social context,” he added, to “help the men and women of today to rediscover as primary the right to life from conception to its natural end.”

Along with unborn children, the elderly are often treated as “waste material,” the pope lamented, sometimes through forms of “hidden euthanasia,” where important medicines are withheld because they are considered too expensive to waste on the elderly.

Also on Monday, Washington, D.C. Cardinal Wilton Gregory reiterated his position that he does not intend to withhold Holy Communion from pro-abortion Catholic politicians such as Joe Biden, insisting bishops are “not there as police, we’re there as pastors.” 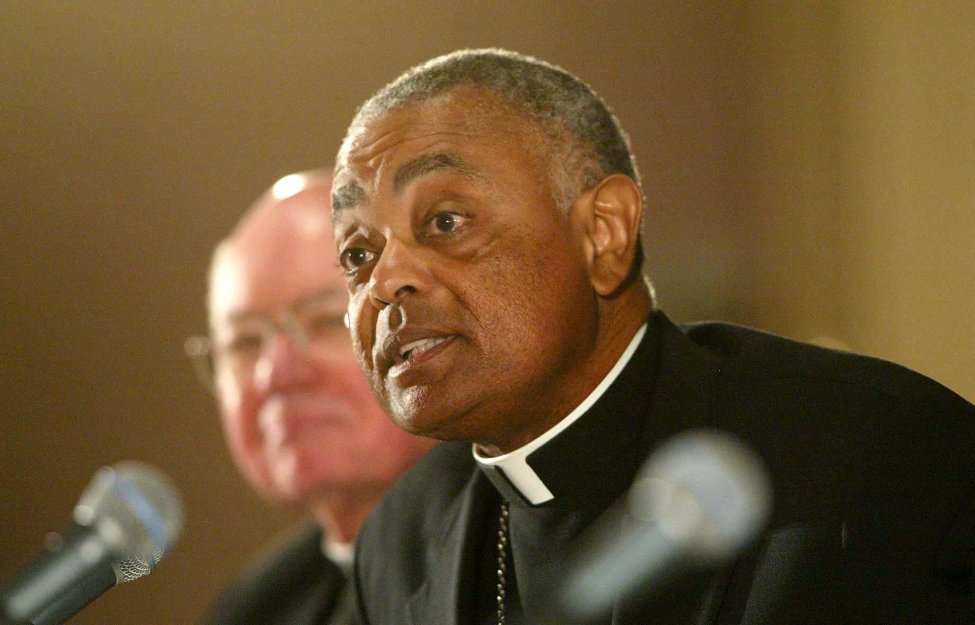 Cardinal Wilton Gregory, shown speaking as president of the U.S. Conference of Catholic Bishops on June 19, 2003. Photo by Bill Greenblatt/UPI

The U.S. bishops remain sharply divided regarding how to deal with Catholics who publicly advocate for abortion rights.

Some have adopted the doctrine proposed by then-Cardinal Theodore McCarrick, who together with Bishop Gregory insisted Communion should not be denied to Catholic politicians, even if they refuse to repent of their abortion advocacy.

In 2004, Bishop Gregory, who was then president of the U.S. Bishops’ Conference, announced the formation of a “Task Force on Catholic Bishops and Catholic Politicians” and named Cardinal McCarrick to lead the team.

In an speech delivered June 15, 2004, McCarrick told his brother bishops, “Based on the traditional practice of the Church and our consultation with members of our conference, other episcopal conferences, distinguished canonists and theologians, our Task Force does not advocate the denial of Communion for Catholic politicians or Catholic voters in these circumstances.”

In this March 4, 2015, file photo, Cardinal Theodore McCarrick speaks during a memorial service in South Bend, Ind. A 2006 letter from Cardinal Leonardo Sandri, a top Vatican official confirms that the Holy See received information in 2000 about the sexual misconduct of now-resigned U.S. Cardinal Theodore McCarrick, lending credibility to bombshell accusations of cover-up at the highest echelons of the Catholic Church (Robert Franklin/South Bend Tribune via AP, Pool, File)

That same summer, Cardinal Joseph Ratzinger — the future Pope Benedict XVI — wrote a letter to McCarrick and then-Bishop Gregory, noting that when a person consistently campaigns and votes for permissive abortion laws, his pastor should meet with him, “informing him that he is not to present himself for Holy Communion until he brings to an end the objective situation of sin, and warning him that he will otherwise be denied the Eucharist.”

“When these precautionary measures have not had their effect or in which they were not possible, and the person in question, with obstinate persistence, still presents himself to receive the Holy Eucharist, the minister of Holy Communion must refuse to distribute it,” Ratzinger wrote.

McCarrick and Gregory opted not to share the contents of Ratzinger’s letter with the other bishops, offering instead a misleading summary of its message.

“I would emphasize that Cardinal Ratzinger clearly leaves to us as teachers, pastors and leaders whether to pursue this path,” McCarrick told the bishops in regard to the denial of Communion to pro-abortion politicians, something that was manifestly absent from Ratzinger’s letter.