In a handwritten letter dated April 7, the pontiff praised Argentinian journalist and television host Gustavo Sylvestre for “cleaning up the news,” after Sylvestre wrote to the pope sympathizing with him following the publication of several articles criticizing him.

Francis told Sylvestre about his concern for the state of journalism, arguing that in pursuit of sensationalism, reporters fall into sins such as “misinformation, slander, defamation, and coprophilia,” the latter being a disorder characterized by “abnormal interest and pleasure in feces and defecation.”

“And I’m told some article writers get paid to do this. Sad! A vocation as noble as that of communicating tarnished in this way,” Francis wrote (see below). 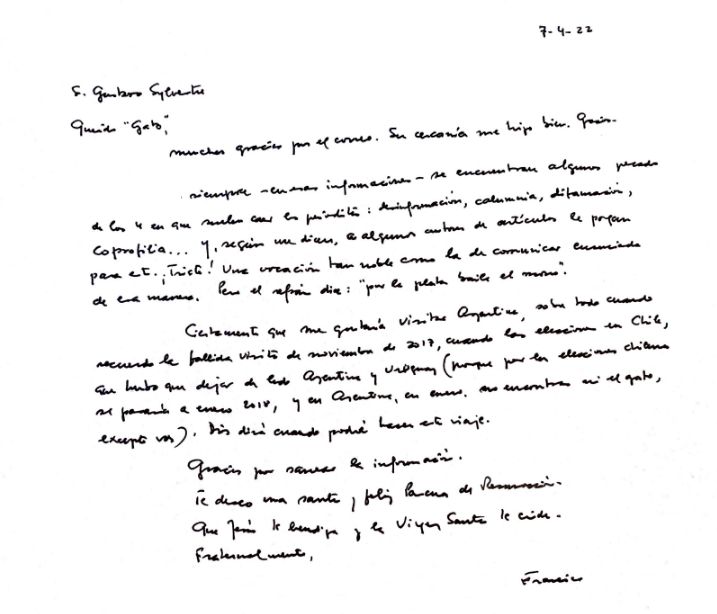 Further along in the letter, Francis once again made public his wish to return to Argentina, something he has not done since his election as pope in 2013.

“Certainly, I would like to visit Argentina, especially when I remember the failed visit of November 2017, which had to be left aside because of elections in Chile, Argentina, and Uruguay,” he said, adding that “God will say when I will be able to make this trip.”

This is not the first time Francis has chastised journalists who criticize him, going so far as to describe such reporting as “the work of the devil.”

There is “a large Catholic television channel that has no hesitation in continually speaking ill of the pope,” Francis said during a meeting with his fellow Jesuits in Slovakia last fall.

“I personally deserve attacks and insults because I am a sinner, but the Church does not deserve them. They are the work of the devil. I have also said this to some of them,” he added. 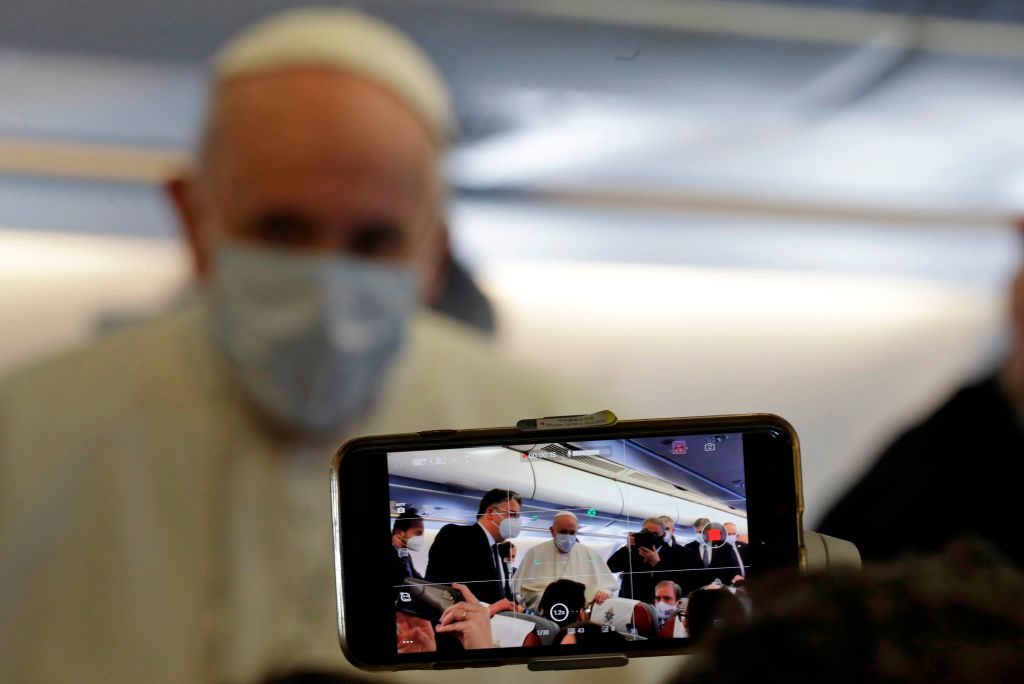 Pope Francis speaks to journalists aboard the aeroplane heading to Iraq on March 5, 2021. (ANDREW MEDICHINI/POOL/AFP via Getty Images)

America magazine, the flagship journal of the Jesuit order in the U.S., reported on the meeting, clarifying that the pope was referring to EWTN (Eternal Word Television Network) when speaking of “a large television channel” that criticizes him.

“Yes, there are also clerics who make nasty comments about me,” the pope continued. “I sometimes lose patience, especially when they make judgments without entering into a real dialogue. I can’t do anything there.”

The EWTN Global Catholic Network was founded in 1981 by cloistered Franciscan nun Mother Angelica and is the largest religious network in the world, broadcasting in multiple languages and reaching an audience in more than 145 countries.