Hong Kong’s security minister has defended the arrest of 90-year-old Cardinal Joseph Zen Ze-kiun, insisting that everyone is equal under the law and exceptions should not be made.

“To my understanding, the Vatican is a place to pursue justice and peace,” Secretary for Security Chris Tang Ping-keung told the South China Morning Post. “If we did not act in accordance with the law because of one’s role in the Holy See, then I think it would actually breach the Vatican’s principle of justice.”

“So we acted fairly on evidence and the law,” Tang said. “We arrested the mentioned suspect based on the things he did. It had nothing to do with his role in the church.”

Two weeks ago, China-backed Hong Kong national security police arrested Cardinal Zen and four others over their roles as trustees in the now-defunct 612 Humanitarian Relief Fund, accusing them of colluding with foreign forces.

In response, the president of the Federation of Asian Bishops’ Conferences, Myanmar Cardinal Charles Bo, released a statement condemning the arrest and denouncing Hong Kong’s descent into a “police state.”

Cardinal Bo declared that Cardinal Zen was arrested and charged “simply because he served as a trustee of a fund which provided legal aid to activists facing court cases.”

“How can it be a crime to help accused persons have legal defense and representation?” he asked. 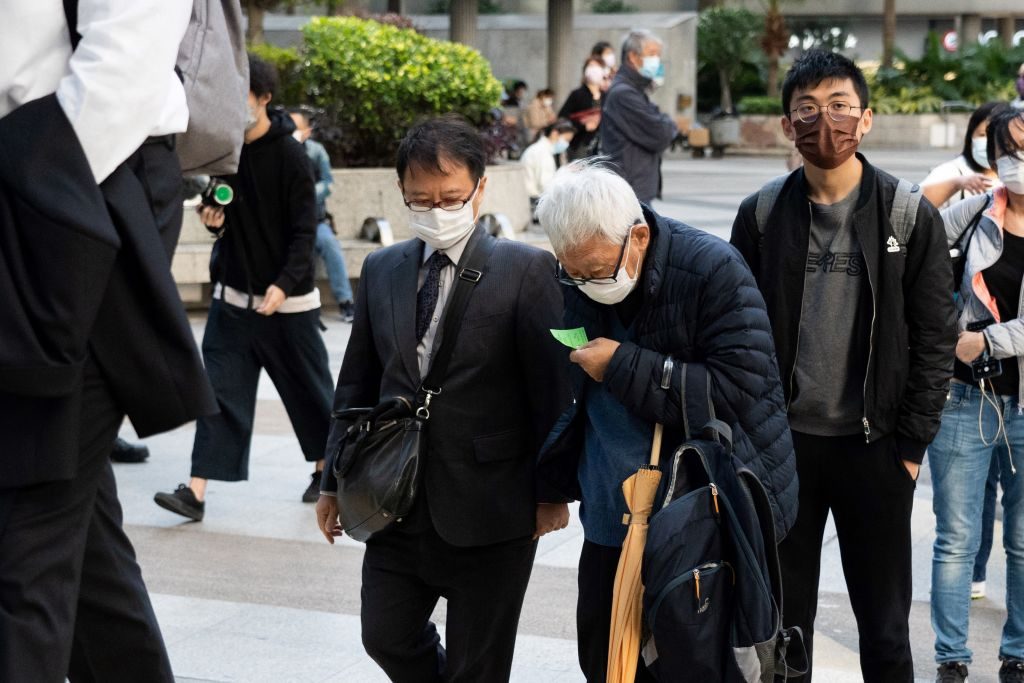 Cardinal Joseph Zen (C) arrives at the Wanchai district court in Hong Kong on December 9, 2021, where jailed media mogul Jimmy Lai was among three democracy campaigners convicted for taking part in a banned Tiananmen vigil as the prosecution of multiple activists came to a conclusion. (BERTHA WANG/AFP via Getty Images)

“Hong Kong used to be one of Asia’s freest and most open cities,” Bo said. “Today, it has been transformed into a police state. Freedom of expression, freedom of the press, freedom of assembly and association, and academic freedom have all been dismantled.”

The cardinal also denounced “recent propaganda attacks against the Church in pro-Beijing media in Hong Kong, and of growing self-censorship among religious leaders due to the circumstances.”

“To see a city that was a beacon for freedom, including religious freedom, move so radically and swiftly down a much darker and more repressive path is heartbreaking,” he said, adding that the Chinese government has “repeatedly and blatantly” broken promises made in the Sino-British Joint Declaration, a situation he called “appalling.”

The United States and European Union similarly slammed the arrests as an effort to stifle dissent, but Beijing rejected the criticism, telling the governments to end their “foolish political show”.

Tang described criticism of Cardinal Zen’s arrest as a “classic smearing campaign” against the city’s efforts in safeguarding national security.

In 2020, China’s National People’s Congress (NPC) passed a severe national security law, allowing the Communist Party to punish anyone in Hong Kong for loosely defined crimes such as “secession,” “collusion with foreign forces,” and “acts against national security,” with offenders facing up to life imprisonment.

Since the law’s passage, the National Security Department has reportedly already arrested 186 people and prosecuted 115, including Cardinal Zen.