Michigan. Gov. Gretchen Whitmer (D) apologized after Breitbart News busted her Sunday for violating her own coronavirus orders at an East Lansing bar.

Breitbart News obtained a photo showing Whitmer and her appointed chief operations officer, Tricia Foster, among a group of 13 people at the Landshark, a dive bar in the college town, on Saturday: 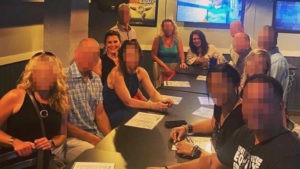 Whitmer’s office refused to acknowledge it to Breitbart News, but released a statement to Eric Lloyd of 9 & 10 News:

REACTION: After a photo surfaced of @GovWhitmer at a table in an East Lansing bar with a dozen other people, seemingly against her own COVID orders, her press secretary released this statement from Whitmer:@9and10News pic.twitter.com/fePStJvfK8

“Yesterday, I went with friends to a local restaurant. As more people arrived, the tables were pushed together,” Whitmer admitted.

“Because we were all vaccinated, we didn’t stop to think about it,” she claimed.

“In retrospect, I should have thought about it. I am human. I made a mistake, and I apologize,” the governor said.

b. Gatherings are prohibited at food service establishments, whether indoor or outdoor, unless:

“Now Whitmer has once again completely disregarded her own rules. Whitmer orders rules she and her staff don’t follow themselves while Michiganders and businesses suffer. Whitmer must end her restrictions immediately.”

Michigan Freedom Fund called on Whitmer to immediately lift all orders this week, a recommendation the governor ignored.