The Republican-controlled Arizona State Senate voted Tuesday in favor of legislation prohibiting abortions after 15 weeks of pregnancy. The bill passed the Arizona Senate as the U.S. Supreme Court weighs a similar law from Mississippi in the Dobbs v Jackson Women’s Health Organization case, in which the court’s decision will bear a monumental impact on abortion in the United States.

Senate Bill 1164 (SB1164), sponsored by Republican state Sen. Nancy Barto, passed the Senate 16-13 along party lines with Republicans voting for the legislation, the Arizona Republic reports. The bill heads to the Republican-controlled State House, and if it passes, the legislation will go to Republican Gov. Doug Ducey, who could sign it into law.

If signed into law, the bill would prohibit “a physician from performing an abortion on an unborn human being whose probable gestational age is determined to be greater than 15 weeks, except in the case of a medical emergency,” the legislation’s purpose states.

A doctor who performs an abortion after 15 weeks would be hit with felony charges and revocation of his or her license to practice medicine, the bill states. The legislation allows for abortions past the 15-week mark in circumstances where the mother’s life is in danger from the pregnancy or if she is at risk of serious permanent injury. The bill also prohibits the prosecution of women who receive an abortion after the 15-week mark.

The legislation is similar to that of Mississippi’s 2018 law that also prohibits abortion after 15 weeks. The law has been challenged by pro-choice groups in Mississippi and the case, Dobbs v. Jackson Women’s Health Organization, has made its way to the U.S. Supreme Court where orals arguments were heard on December 1. The Supreme Court will decide on the case by June. 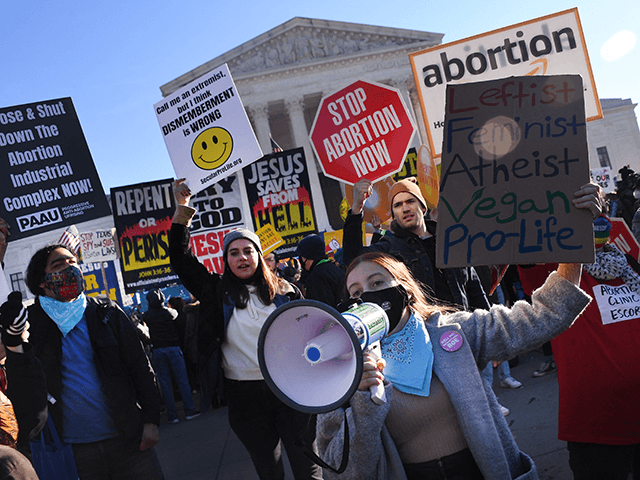 Abortion rights advocates and anti-abortion protesters demonstrate in front of the U.S. Supreme Court in Washington, DC, on December 1, 2021. (Photo by OLIVIER DOULIERY/AFP via Getty Images)

“If the Court upheld the law, it would likely do so by overturning Roe, which discovered a hitherto unknown right to abortion in the Fourteenth Amendment to the U.S. Constitution. States would then be able to determine their own abortion rules,” Breitbart News Senior Editor Joel Pollak previously reported.

Barto said that she believes the Roe v. Wade decision will be overturned, the Arizona Republic reports.

“We’re hoping,” she said, adding that SB1164 in the meantime would provide “an opportunity in Arizona to protect more unborn lives.”