Mike Bloomberg says Washington should offer green cards and then citizenship to an almost unlimited number of foreigners who graduate from U.S. colleges.

The economic strategy would help employers — but would flood the Americans’ white-collar labor market and likely reduce American college graduates salaries while also spiking prices for the houses needed by the graduates’ families, said critics.

One of the things in immigration is you’ve got to do some things quickly … You’ve got to staple a green card on every degree when they [foreign students] get out of college, particularly if they’re studying STEM [Science, Technology, Enginering and Math]…  We need more immigrants, not less immigrants. And a lot of them come from China.

Americans would be shut out of job opportunities, and because employers would no longer have to compete for new graduates, their salaries would plummet. Anytime you have an inflow of people to particular geographic locations, there’s going to be a shortage of housing, and Americans and others are going to be priced out of affordable housing.

This “would mean the annihilation of our American graduate labor pool,” said Marie Larson, a co-founder of the American Workers Coalition.

Foreigners “will take any jobs because any job here will be better than anything they can get from where they are coming from … They will be displacing Americans citizens from their livelihoods,” he added.

But the Bloomberg plan would be a boon to education companies, Vaughan said. Foreigners “would be willing to pay almost anything for a degree … just because it would be pass to a green card for them and their families,” she said.

In contrast, far-left Sen. Bernie Sanders has declined to endorse economic policies that would import “high-skilled” immigration for U.S. employers. The Bloomberg-style economic argument is largely ignored in Sanders’ easy-immigration plan, even though it would also allow a huge number of foreign graduates into U.S. jobs. Sanders’ plan promises to “reform the government agencies tasked with enforcing immigration law to ensure our immigration agencies and officers are serving a humanitarian mission, not a law enforcement one.”

The numbers suggested by Bloomberg would dramatically expand legal immigration into the United States without removing all anti-migration rules.

U.S. citizenship is a huge prize for billions of people who were born in poor, backward, and in chaotically diverse countries. For example, India’s population is so huge that India has roughly 178 million young men aged 20 to 34. That population of young Indian men is more than half the population of the United States.

Each year, roughly four million Americans turn 18, and roughly 800,000 Americans get skilled, four-year degrees in healthcare, business, science, software, or engineering. Those Americans then must pay their college debts as they compete for jobs and housing against roughly one million legal immigrants, more than one million college graduate visa workers, plus at least seven million illegals in jobs.

The current level of immigration floods the labor market, and it shifts much wealth from the heartland to the coasts, from young to old, and from wage-earners to shareholders. For example, Bloomberg.com reported February 24 that employment among college graduates dropped below blue-collar employment:

Unemployment among Americans aged between 22 and 27 who recently earned a Bachelor’s degree or higher was 3.9% in December — about 0.3 percentage point above the rate for all workers.

Bloomberg.com noted that pay for many graduates has also stalled — and is lagging behind blue-collar pay raises — in President Donald Trump’s “Blue Collar Boom”:

The strong job market should be helping graduates to pay what they owe — and at the top end of the wage scale, it is. But in recent years, while high-school graduates have seen a sharp pickup in earnings, the lower-earning half of college graduates haven’t — and the gap between them is now the smallest in 15 years.

More than four in 10 recent graduates are working in jobs that don’t usually require a college degree, the New York Fed says. And roughly one in eight is working in a field where typical pay is around $25,000 a year or less.

Part of the problem is that the jobs market is saturated with degree-holders, while tight labor conditions have ramped up demand for a different kind of skills — bringing benefits to electricians and plumbers, for example. 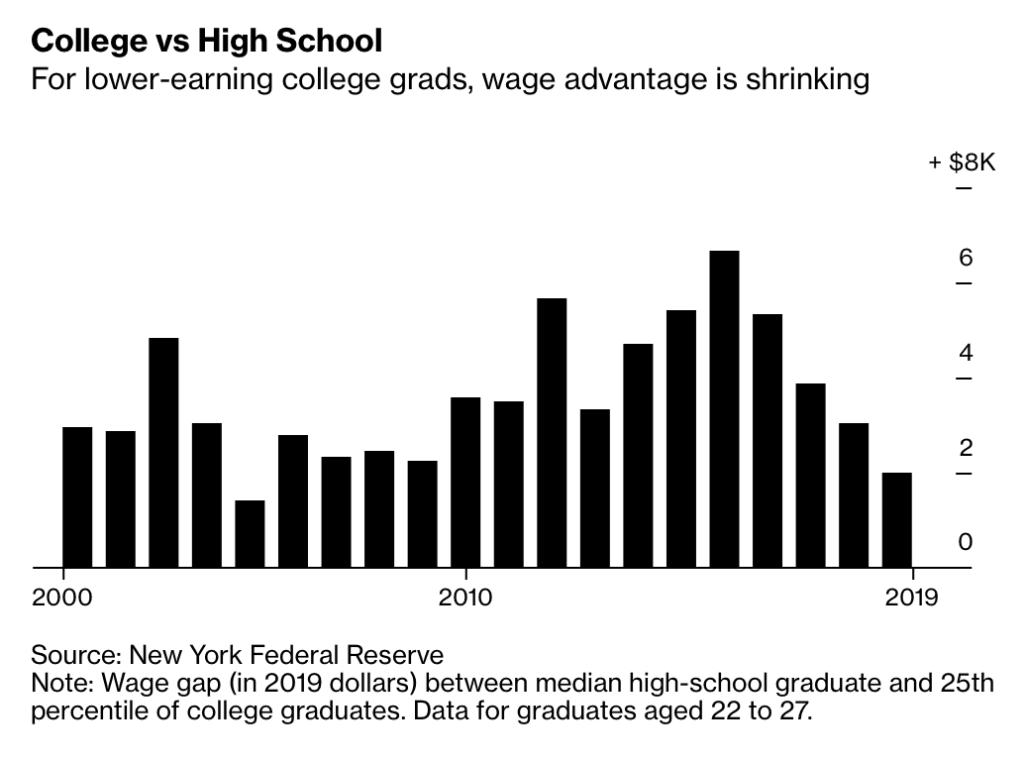 But Bloomberg’s proposal would further saturate the market for college graduates.

Bloomberg’s plan would offer green cards to more than one million foreign college students who are now registered in the United States. China is the leading source of foreign students with 480,000 registered, far ahead of India’s 250,000 students, Korea’s 90,000 students, and Saudi Arabia’s 6o,000 students. Ten European countries provided fewer than 100,000 students, according to the visa data provided by the Department of Homeland Security.

In addition, many more foreign youths would grab Bloomberg’s offer of citizenship by quickly registering at low-quality or high-quality universities. In 2018, for example, 7.5 million Chinese graduated from college. If just one of every six Indian men were ready and willing to accept Bloomberg’s offer, it would quickly boost the U.S. population by 30 million Indians — and they would bring millions more spouses, parents, and children.

In his 2020 campaign, Bloomberg has repeated his claim that U.S. employers needs skilled migrants. “This country needs more immigrants, and we should be out looking for immigrants,” Bloomberg told the San Diego Union-Tribune on January 5:

Bloomberg has also endorsed the S.386 bill to fast-track citizenship for India’s one-million-strong college-graduate labor force throughout many American companies, including prestigious companies in Silicon Valley. The bill is being pushed by Utah legislators, including Sen. Mike Lee, (-UT)

The S.386 bill is also cheered by FWD.us, an advocacy group for high-tech investors, including Bill Gates and Mark Zuckerberg.

Technocrat/investor Mike Bloomberg: Migrants with more 'grey matter' can save the US establishment from the mob's guillotine — b/c the high-tech economy denies jobs & purpose to 'those who are not' successful.
That's the context to his farmer comments.https://t.co/6CduTjc84P

Bloomberg is an investor with a net worth of roughly $60 billion. So, alongside his call on CNN to loosen immigration rules, he also said the government should tighten trade rules to protect the economic interests of investors.

It’s just unrealistic to think that we’re going to stop doing business with China, but it is not unrealistic to try to pressure them into doing things on human rights. But it’s not just human rights. They steal intellectual property. I don’t think there’s any question about that. They are very unfair in treaties and the way we do business. We can’t own something there [but] they can own it in our country.

“He’s a self-interested businessman who does not have the best interest of this country at heart,” said Larson. “He’s taking what isn’t his to give — the jobs that rightfully belong to American citizens and their children … That’s not for anybody to give away.”

Sen. Bernie Sanders says that illegal immigrants are "our people."
If he gets the nomination, a wave of people from Inda, Africa, the Middle East will rationally try to accept Sanders' offer to become "our people."https://t.co/u9c0piYUy5