U.S. Customs and Border Protection (CBP) officials seized 934 pounds of fentanyl at the southern border in May, a 300 percent increase over last May, according to CBP data.

The agency’s most recent statistics also reveal that in the eight months of fiscal year 2021, officials have seized 7,039 pounds of fentanyl, more than the entirety of fiscal year 2020, in which they seized 4,544 pounds.

Fentanyl, an opioid, is akin to morphine but is estimated to be 50 to 100 times more potent. 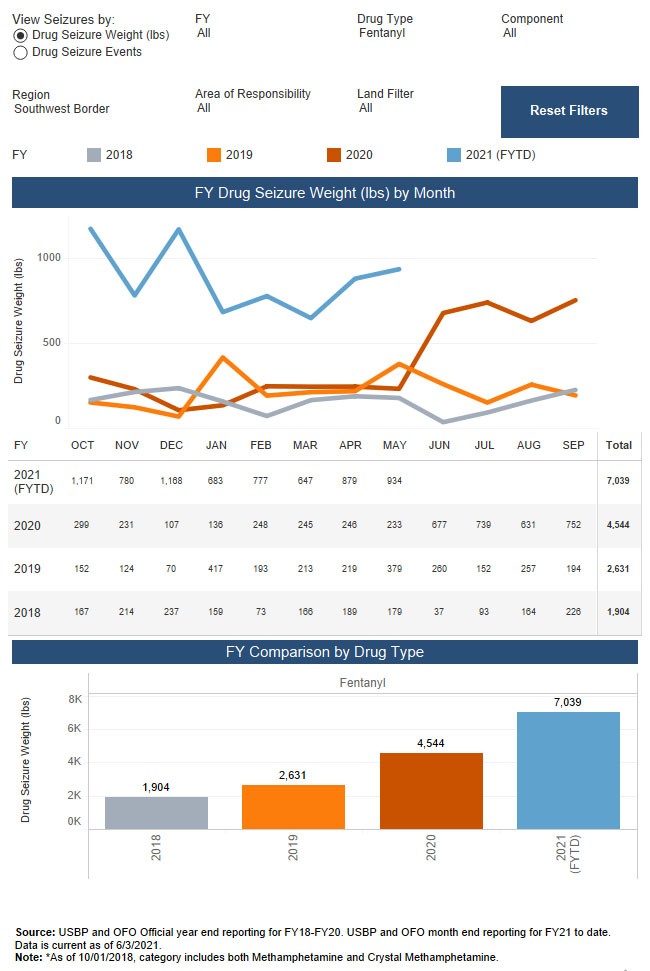 The updated data from CBP comes amid a surge of illegal migration at the southern border beginning in the first four full months that President Joe Biden has been in office. In May, for instance, border officials encountered more than 180,000 migrants crossing the border illegally, a 675 percent increase over last May.

Rep. Yvette Herrell (R-NM), who represents one of the four border states directly impacted by the growing crisis, posted to social media:

In Texas, where the illegal crossings were most prevalent last month, Gov. Greg Abbott (R) stated in a press release about fentanyl specifically, “Lives are at stake as dangerous drugs like fentanyl pour into our communities at an astonishing rate, and we must act now to crack down on this proliferation of this deadly drug.” The governor announced Saturday he signed a law to lengthen prison time for those “manufacturing and delivering” the substance:

Texas is going after the drug cartels and the gangs that help them push dangerous drugs like fentanyl.

I just signed a law to increase prison time for manufacturing or delivering fentanyl.

It also limits probation and parole for these criminals.

Abbott and Arizona Gov. Doug Ducey (R) have declared states of emergency at their borders and wrote a joint letter Thursday calling on fellow governors to provide them assistance “given the staggering number” of illegal migrants entering their states.

“The Biden Administration’s policies are the most reckless, reprehensible, and dangerous of any president I’ve ever seen,” Abbott told Breitbart News’s Texas team last week. In the governors’ letter, they directly tied the “failure to enforce federal immigration laws” to the harms caused by “deadly fentanyl and human-trafficking.”

In addition to the administration’s relaxed border policies, a Breitbart News report predicted last year an increase in fentanyl and methamphetamine smuggling and a decrease in marijuana smuggling. The report suggested the shifting pattern would come in part because of loosened U.S. marijuana laws and the growing cost of increasingly involved cartel wars, forcing cartels to “move more product.”