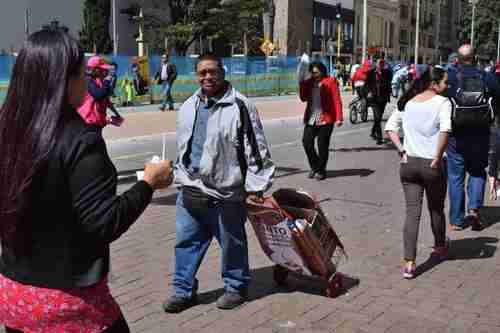 Larry Centeno, 44, once had his own construction company in Venezuela. Now he makes a living selling coffee on the streets of Colombia’s capital. (Miami Herald)

Venezuela’s Socialism continues to destroy the economy. More and more, people are losing weight because of food shortages, and children are dying in hospitals because basic medicines are not available.

The bolívar currency, in which the “sainted” former president Hugo Chávez took such pride and pleasure, is today worth little more than toilet paper, with the country’s inflation rate around 600 percent, expected to rise to 2,300 percent in 2018, according to the International Monetary Fund (IMF).

Venezuela has more oil than any other nation in the world, but because of successful implementation of pure Socialism by Chávez and by the current dictator, Nicolás Maduro, the oil company PDVSA has been nationalized and turned over to the dictator’s Socialist cronies, who are so corrupt and incompetent they couldn’t operate a bicycle, let alone an oil company.

The result is that oil production keeps falling. It is absolutely incredible how much destruction Socialism is doing to Venezuela’s economy. In December, Venezuela produced 1.7 million barrels of oil per day, down 27 percent since 2014, and the lowest level of production in 28 years. Even though global oil prices have been rising in the last few weeks, it’s done little good for Venezuela because oil production keeps collapsing.

Since oil is pretty much Venezuela’s only export that it can use to earn foreign currency (dollars), Venezuela can no longer import food or medicines, which is why people are starving to death and babies are dying in hospitals.

Maduro is hoping that Russia or China will bail him out, the way that they used to bail out Cuba’s Socialism. However, those countries really do not care about Venezuela and so it will be bailed out only to the extent that it annoys the United States.

With the bolivar currency more worthless than toilet paper, and with food and medicines almost impossible to buy, hundreds of thousands of people from Venezuela have been crossing the border into Colombia, some just to get food to take back home, some to earn money to take back home to family.

There is an ironic twist. When it was available, food was heavily subsidized in Venezuela. So people living near the border would buy subsidized food in Venezuela and sell it in Colombia at much higher prices.

This is no longer possible. Instead, citizens now take anything they can from Venezuela and take it across the border to sell it and earn Colombian pesos, and then use those pesos to purchase food, medicines, and other basic products needed to survive. They can then sell those products on the black market in Venezuela at a much higher price. Rice, for instance, can be bought in Colombia for the equivalent of about 1,300 bolivars and sold in Venezuela for around 1,800 bolivars.

With hundreds of thousands of refugees possibly turning into millions, Colombia’s own economy may become destabilized. According to Jozef Merkx, head of the U.N. High Commission on Refugees in Colombia, the Colombian government will have the primary responsibility of providing documentation, health services, education, and in some cases shelter to the migrant influx. This is a problem facing many countries around the world where huge numbers of migrants and refugees are fleeing violence and starvation. Vice News and Reuters and CNN and Reuters (8-June-2016)

Venezuela threatens to end trade with Aruba, Curaçao, and Bonaire

Venezuela is threatening to end all trade with three Caribbean islands governed by the Netherlands: Aruba, Curaçao, and Bonaire. And the reason is the same as for Colombia.

Venezuelans are smuggling goods into those three islands, just as they are into Colombia.

Venezuela’s Socialist dictator Nicolás Maduro is seeking to blame anyone but himself for the disaster he has caused. Often he blames a criminal conspiracy by the United States.

But now he is blaming “the mafias” for his disaster. In December he said,

In Aruba and Curaçao, the mafias are tearing us apart, and I have even thought about closing all means of communication, and all commercial interaction, of all kinds: Both air and sea with Aruba, Curaçao and Bonaire at any time.

I’ve thought about it seriously, about the mafias that take everything — the oil, rubber, shampoo, meals, everything — and for Cúcuta … And Maicao … Oh, we have a surprise for you.

On Friday of last week, Maduro began to implement his “surprise.”

He suspended all air and sea traffic with Aruba, Bonaire, and Curaçao. The suspension was supposed to last only 72 hours, but on Monday he not only extended the suspension indefinitely, but also prohibited all trade between the islands and Venezuela.

Venezuela’s vice president Tareck El Aissami announced the extension by echoing Maduro’s words and saying that they will combat “the mafias that steal our assets and smuggle with impunity strategic materials, which severely affect the services and quality of life.”

This could be financially disastrous for the three islands because they have a big economic dependency on Venezuela. Fresh fruit and vegetables arrive at the islands in small boats from Venezuela.

Most important, Venezuela’s oil company PDVSA leases refineries in Curaçao and Aruba to process crude into gasoline, naphtha, diesel, jet fuel, asphalt, base oils and lubricants, and to blend its diluted extra-heavy crude with light crude for export, much of it sent to PDVSA’s US-based subsidiary, CITGO. On Bonaire, PDVSA owns a large oil terminal.

So far, Maduro’s blockade of the three Caribbean islands has not affected their relationship with PDVSA. However, in view of the concern that this will be Maduro’s next step, the government of the Netherlands has been asked contact Venezuela’s government and “to seek clarity from Venezuela” with regard to commercial relations. PanamPost and Telesur and Hellenic Shipping News and Jamaica Observer and Miami Herald