Thousands of protesters took the streets of multiple cities in Argentina this weekend to protest what is increasingly being referred to as the “VIP vaccination” scandal, in which the government of socialist President Alberto Fernández reportedly vaccinated dozens of ineligible people with friends in the administration. 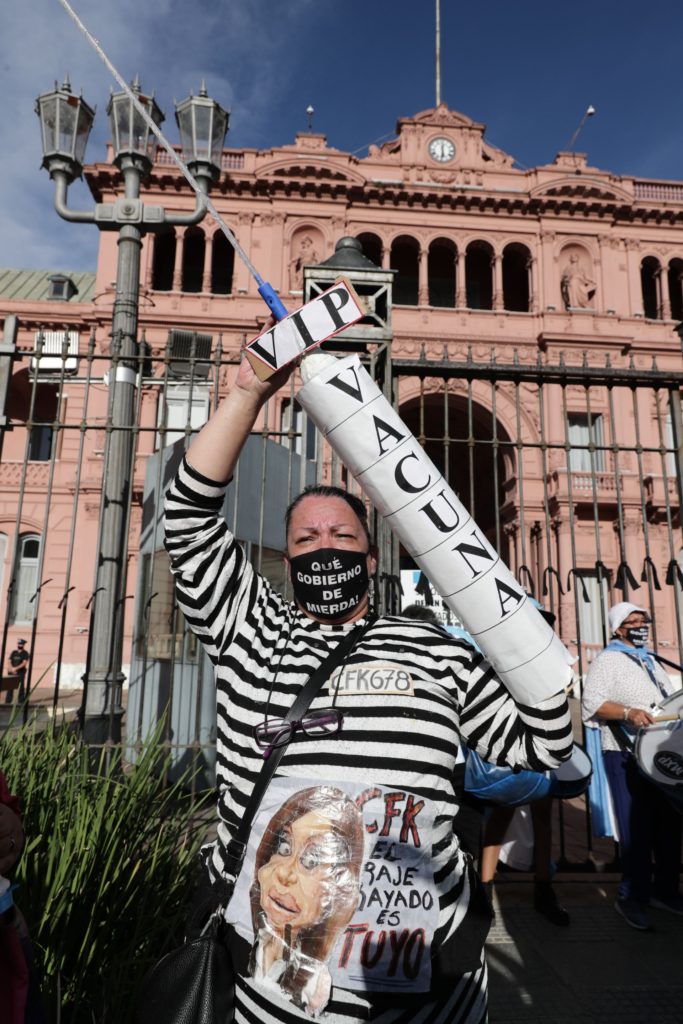 A woman protests against the government of President Alberto Fernandez, following a scandal over coronavirus vaccine queue-jumping that forced his health minister to resign, in front of the Casa Rosada presidencial palace in Buenos Aires. ( ALEJANDRO PAGNI/AFP via Getty)

Argentine Health Minister Gines González García resigned last week after local media revealed that as many as 70 people secretly received vaccinations against the Chinese coronavirus, some of them as young as 27 years old and without health preconditions that would necessitate urgent vaccination.

Argentina recently cut a deal with the government of Russia to distribute its vaccine candidate, “Sputnik V,” approved hastily last year prior to Phase III clinical trials, and to manufacture it domestically. According to the Agence France-Presse (AFP), Argentina is also distributing the Indian coronavirus vaccine candidate Covishield, whose efficacy remains a point of dispute, and a vaccine candidate from the Chinese firm Sinopharm, which is believed to be about 72 percent effective.

Argentina launched vaccinations recently only for healthcare workers. Last week, the nation opened up the vaccination process to people over the age of 70. Public health experts believe that senior citizens are at much higher risk of experiencing a severe coronavirus infection.

The Argentine newspaper Clarín noted that at least six cities in addition to the capital, Buenos Aires, experienced anti-government protests on Saturday, though the Buenos Aires assembly was the largest. It was the tenth day of organized protests against Fernández since he took office in December 2019/

The marches were overwhelmingly peaceful, featuring crowds carrying signs with anti-government slogans. Among the slogans Clarín saw at the Buenos Aires rally were “the worst president in history,” “my phone is smarter than my president,” and “Alberto is an immoral.” One poster mocked the name of Fernández’s political coalition, the “Front for All”: “Front for All – Vaccines for Some.”

The Argentine newspaper noted that a small minority of those protesting the president did not appear upset that the government had illicitly vaccinated well-connected people, but protested the vaccine itself. One person carried a sign reading “no to the genocidal vaccine,” and another, “down with PCR tests,” considered the most accurate way to test for Chinese coronavirus.

No political party organized the protests, so the public in attendance reportedly did not reject any particular ideology. Most merely expressed disgust at the federal government. Some members of “Together for Change,” the opposition party coalition, did attend the rallies.

Fernández and his administration chose to highlight, in responding to the protest, a display organized in Buenos Aires of large garbage bags, stuffed to give the appearance of body bags and labeled with the names of those who were illicitly vaccinated. While some bags featured specific names on them, others simply read phrases like “Alberto’s friends,” referring to the president. Fernández made clear that he interpreted the symbolism as a threat to the lives of those targeted; some interpreted them to be symbols for the bodies of those dead because they could not access the vaccines reportedly stolen by public officials.

“The way to protest in a democracy cannot be to display in front of the Pink House [the presidential offices] body bags with the names of politicians on them,” Fernández said in a statement. “This lamentable act only shows how many in the opposition view the Republic. We cannot be silent against such an act of barbarism.”

The list of individuals fascinated without going through the Health Ministry’s legal system was published last week. The youngest person on the list is 27 years old, according to Clarín. Included on the list were several former government officials with friendly ties to Fernández or his administration. Fernández has distanced himself from the scandal and urged his health minister, González, to resign, particularly in light of testimony from the health workers administering the vaccines that they were pressured to do so and that “there was no way to say disobey.”

A poll published Monday showed that about 20 percent of people who voted for Fernández’s “Front for All” are reconsidering their vote in light of the scandal. Another 22 percent said they had already decided to change their vote against the party coalition due to other factors.

About half of respondents said they believed there were “many more” people illicitly vaccinated than the 70 the government admitted to.

The vaccine scandal follows months of tensions growing in Argentina in response to the government’s pandemic policies. Unlike many other nations, Argentina has allowed the states to determine the obligatory nature of wearing a mask in public. Buenos Aires, the urban capital, has made masks mandatory, resulting in violent attacks on police officers requesting that unmasked people abide by the law.

Socialist lawmakers have raised far more invasive proposals regarding the pandemic than masks. In June, one lawmaker suggested that the government should force coronavirus survivors to donate blood plasma, which doctors can use to help other patients recover. In January, a “Front for All” member stated plainly, “you have rights, but not in a pandemic,” causing an uproar.

Citing the pandemic, Fernández outraged the nation last week with the imposition of an allegedly “one-time” wealth tax on citizens whose net worth is over 200 million pesos ($2.3 million).