A coalition of Latin American anti-communist activists, including Cuban dissidents who suffer regular repression on the island, organized a multi-continental set of peaceful assemblies Thursday calling for the freedom of 47 pro-democracy activists arrested in Hong Kong for allegedly violating an illegal “national security” law.

Pro-democracy voices in Cuba, Costa Rica, Dominican Republic, the United States, Uruguay, and Mexico have vowed to join the campaign, which organizers have branded #Free47 in honor of those imprisoned.

The Chinese Communist Party, through its National People’s Congress, passed a law in May 2020 requiring minimum prison sentences of ten years in prison for individuals in Hong Kong found guilty of four crimes: “secession,” “terrorism,” “incitement of foreign interference,” and “subversion of state power.” Under the “One Country, Two Systems” policy that legally governs Hong Kong, Beijing’s laws do not apply in the formally autonomous region, but Hong Kong police have enforced the national security law, anyway.

The 47 arrested are facing charges of subversion for participating in a primary election organized by pro-democracy parties seeking candidates to run for positions in Hong Kong’s Legislative Council, the governing lawmaking body that legally plays the role the NPC does in Beijing. The Hong Kong government outlawed the primary, which activists noted was more of an informal “poll,” and arrested the candidates.

Over half a million Hong Kong voters participated in the primary despite warnings from the Chinese-controlled government that it was illegal. Hong Kong threatened to arrest all 600,000 of them, but settled for placing the 47 biggest names involved in prison. Among the most prominent of those imprisoned is the convener of the Civil Human Rights Front, the often-assaulted Jimmy Sham; fired professor Benny Tai, who lost his job after organizing protests in 2014 and went on to organize the primary; and several expelled lawmakers including Claudia Mo, Jeremy Tam, Helena Wong. and “Long Hair” Leung Kwok-hung.

All 47 face a minimum of ten years in prison for “conspiracy to subvert state power.”

The arrests flowed from a wave of anti-communist protests that began in 2019 in response to a law proposed by the Legislative Council that would have allowed the extradition of anyone present in Hong Kong to China if accused of violating Chinese laws. The protests succeeded in killing that law, but resulted in Beijing undoing “One Country, Two Systems” entirely, though it remains officially the policy in place.

The Latin American activists, lawmakers, party leaders, and others organizing support activities for the Hong Kong political prisoners have joined a larger group called the Hemispheric Front of Liberty, founded this year to create a common focal point for activists fighting communism around the world. The activists noted that the growing power of the Chinese Communist Party, which both ideologically and financially supports nefarious actors in Latin America like the Cuban government, is a common threat to humanity.

“These balloons represent our demand for freedom, not just for these activists, but for all men and women in Cuba who are serving unjust prison sentences for their political ideas,” longtime anti-communist activist Arianna López Roque explained, before releasing the balloons, “like Didier Almagro Toledo who is right now fighting for his life, as he is on hunger strike. These balloons also represent our political prisoners.”

Elsewhere in Cuba, anti-communist groups also organized vigils wearing yellow in support of the Hong Kong protest movement. Yellow raincoats became a symbol of the protest movement there after the death of a 20-year-old protester who fell while trying to hang a protest banner, wearing a raincoat, during a protest. Some protesters also supported Hong Kong while honoring Cuban martyrs like Pedro Luis Boitel, who died of a hunger strike in a communist political prison in 1972. He was 40 years old and had been in prison for over a decade at the time of his death. 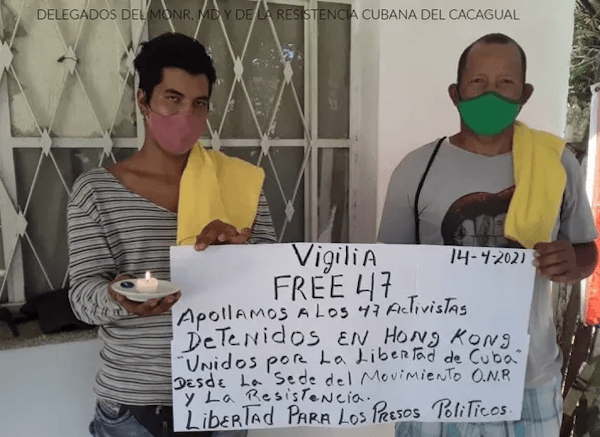 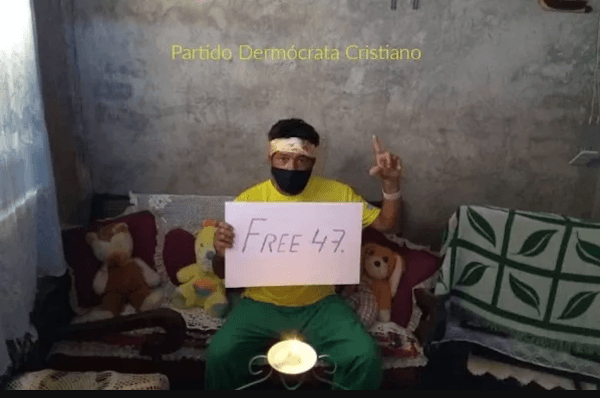 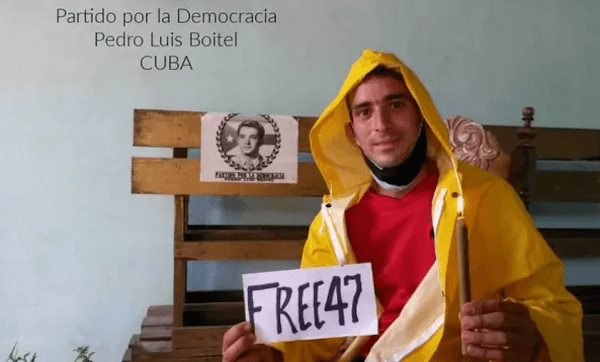 In Havana, the head of the Ladies in White, Berta Soler, and husband and activist Angel Moya also partook in a vigil for the Hong Kong political prisoners. The Ladies in White is an organization of Cuban mothers, daughters, wives, and sisters of political prisoners whose sole act of protest is attending Catholic Mass on Sundays, wearing white and carrying photos of their loved ones. Soler joined the group when Moya was still in prison; now both protest together, facing arrests on a nearly weekly basis for years.

Orlando Gutiérrez-Boronat, the head of the Assembly of the Cuban Resistance in Miami and founding member of the Hemispheric Front for Liberty, told Breitbart News that unity in supporting the fight against communism a world away was necessary for Latin America’s freedom fighters.

“Key Latin American leaders and activists have come to the realization that the struggle against Communism is more pertinent than ever; be it for the freedom of Cuba, Nicaragua, Venezuela, or Hong Kong and Taiwan. Communist totalitarian states function like a single organism, a virus,” Gutiérrez-Boronat said. “The Hemospheric Freedom Front is a strong sign that, at last, Latin America is aligning its antibodies to fight off this totalitarian infection. To paraphrase Dr. King, the struggle for freedom anywhere is the struggle for freedom everywhere.”

The Assembly of the Cuban Resistance is among the over 100 organizations in the Coalition to End Forced Labour in the Uyghur Region, which calls for China to cease is genocide against the ethnic Uyghur of Xinjiang and to stop using them as slaves in industries such as industrial manufacturing, cotton-picking, and tomato harvesting.