Terrorist mobs have destroyed 25 police emergency response stations in Bogotá, Colombia, alone as of Wednesday night in a spate of violent attacks nationwide. Eyewitnesses say the assailants were attempting to burn police officers alive and, in some cases, succeeded in setting them on fire.

Colombia is in the midst of what leftist movements are calling a “national strike” against the government, police officers, and authority in general. Some unrest began last week in response to conservative President Iván Duque proposing a large tax hike on most of the country, claiming it necessary to combat the negative economic effects of the Chinese coronavirus pandemic. Widely panned by a bipartisan coalition that including the head of Duque’s party, former President Álvaro Uribe, the tax reform failed to pass and Duque announced Sunday he would no longer pursue it.

The end of the tax controversy did not stop nationwide protests, however, which turned violent when radical leftists organized on Saturday, a Marxist holiday known as International Workers’ Day. Far-left unions and syndicalist groups have insisted on continuing the “national strike” despite no longer having a political goal or concrete objective. The calls for more protest have resulted in roving mobs attacking police stations, public transit stops, hotels, banks, and civilian residential property in the capital as well as large cities like Cali, Medellín, Barranquilla, and Cartagena.

Photos of the daytime protests preceding the nighttime mob violence show little indication that those involved are concerned about tax hikes. The English-language acronym “ACAB,” or “all cops are bastards,” has become a rallying cry for “protesters.” Many openly advocate attacking and killing police. Also common are offensive depictions of police officers as pigs. 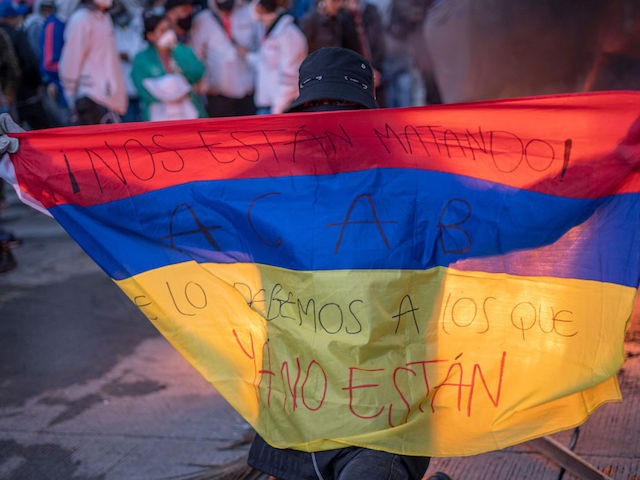 A man holds a Colombian flag in front of a bonfire while people protest at Monumento a los Héroes during a national strike on May 5, 2021 in Bogota, Colombia. (Diego Cuevas/Getty Images) 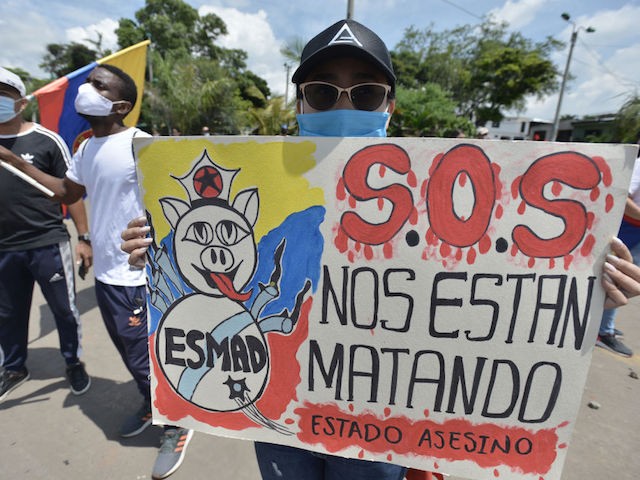 May 03, 2021, during the sixth day of protests for the tax and health reform carried out by the government of Ivan Duque in addition to the precarious social and economic situation that Colombia is experiencing. (VizzorImage/Nelson Rios/Getty Images) 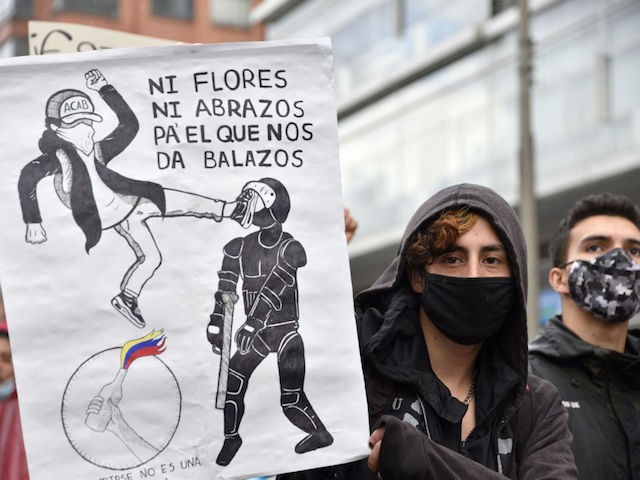 A demonstrator holds a banner that reads in Spanish “Neither flowers nor hugs for the ones who shoot us” during a protest against the government of President Ivan Duque on May 04, 2021 in Bogota, Colombia. (Guillermo Legaria/Getty Images)

Colombia’s RCN news network published an interview with police Lieutenant Miller Bastidas on Wednesday in which he recounted seeing his offices ablaze during the burning down of the Immediate Action Command (CAI) police station in La Aurora, Bogotá, this week.

“We saw a mob of people who totally surrounded the CAI, at that moment we closed the doors, and they began hurling Molotov cocktails, rocks, sticks, and all sorts of blunt objects,” Bastidas narrated. “I saw one of my officers in flames, asking for help, desperate.”

“It is a moment where you think about the family — the wife, the kids, the parents, and in the lives of the officers that you are responsible for,” he told RCN.

In an interview with Colombia’s Caracol TV, another police officer who escaped the La Aurora station, Katherine Mahecha, described thinking of her seven-month-old daughter as the mob beat her following her escape from the building.

“We raised our hands practically just asking them to please not attack us and we were shouting it, ‘please don’t hit us, don’t hit us,'” Mahecha described. “When we started exiting they started to throw rocks, stones, giant rocks and they hit me in the foot. I got tangled up and fell and when I fell I felt the first kick, kicks everywhere.”

“At that moment you really just think that you already died, I just kept thinking about getting home to see my daughter,” she continued.

Mahecha survived, she said, because a civilian intervened. She said she did not know who the person was, but that they began shouting “don’t hit her, please, she’s a woman” and dragged her out of the mob. She added that, like Bastidas, she saw a colleague with his face on fire, and that the objective of the flames was to smoke out the officers to assault them outside.

Reports of mobs attempting to burn down populated locations — most of them, but not all, CAI police stations — have emerged nationwide this week. In the western city of Cali, a leftist mob attempted to burn down the La Luna Hotel on Tuesday night. As in Bogotá, where a civilian appeared to save Mahecha, civilians in Cali also organized groups, in some cases armed, to confront the terrorists.

The newspaper El Tiempo published an interview on Wednesday with one of the guests at the La Luna Hotel, a professor named Carlos Peralta, who stated that the mob in Cali also appeared to have the objective of burning all those inside the building alive.

El Tiempo reported Thursday that it had obtained evidence that the mob burnings were coordinated attacks, not spontaneous eruptions of violence. A local official in Bogotá accused leftists of using Facebook to organize attacks, writing messages on the social media site specifically calling for criminals to convene and “burn the CAI” about an hour before a mob convened at a local park on Wednesday. Fearing violence, the local councilmen and other officials went door-to-door urging businesses to shut down. The officials also used Whatsapp to contact state officials asking for law enforcement backup for their local forces, but “no one” answered, they told the newspaper.

The officials also attempted to organize a “human shield” defense of the police station in the Kennedy neighborhood of Bogotá, but were met with a barrage of rocks and stones. A video from Twitter reproduced by the newspaper shows the attack.

After several failed attempts, the mob reportedly succeeded in burning the entire station down.

In Medellín, a city in Colombia’s mountainous heartland, a leftist mob burned down a highly trafficked Metroplus public transit station, an unprecedented event in the city despite its extremely violent history as a drug trafficking hub in the 1980s and 1990s. 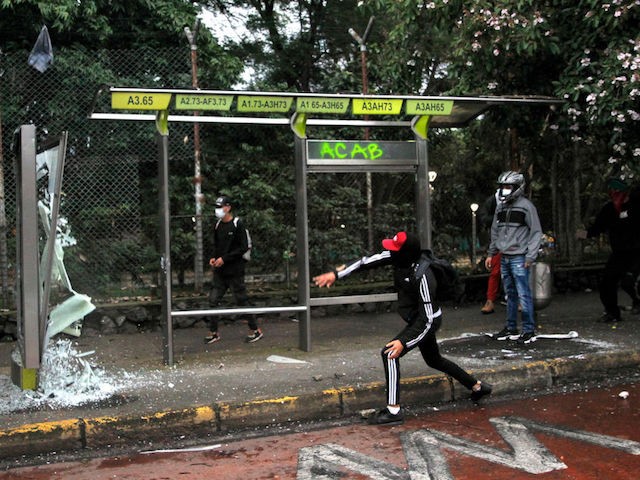 A demonstrator throws a rock into a bus stop shattering a glass panel during national strike on May 5, 2021, in Medellín, Colombia. (Fredy Builes/Getty Images)

“From Cali, I want to inform the country that, thanks to the investigations by a specialized team of prosecutors … we have determined that [involved in] the disorder and vandalism occurring in Cali in last days there are structures tied to drug trafficking, the ELN, and FARC,” Barbosa said in a video message on Tuesday night. The FARC are the Revolutionary Armed Forces of Colombia and ELN are the National Liberation Army, both Marxist narco-terrorist organizations.

Estimates as to the human cost of these leftist riots vary, but at least 20 deaths attributable to the violence have been recorded and over 800 injuries. At least 80 of those injured are journalists attempting to document the reality of the violence, according to the Foundation for Freedom of the Press, a Colombian group.