Locals in Cali, Colombia, responded to an influx of hundreds of protesting indigenous people in their residential complexes with firearms and machetes on Sunday, a testament to widespread civilian discontent with the government’s handling of left-wing riots nationwide last week.

Protests began the last week of April throughout Colombia against President Iván Duque’s proposed tax reforms. While Duque identifies as a conservative member of former President Álvaro Uribe’s Democratic Center party, his reforms include significant, progressive tax increases that outraged both conservatives and progressives alike. By May 2, Duque announced he would no longer pursue the tax hikes.

Duque’s announcement did not stop a coalition of far-left groups from launching a “national strike” to damage the country’s economy, calling for road blockades and mass protests nationwide. The “national strike” has in particular attracted violence against police, including the firebombing of dozens of police stations in Cali, Bogotá, and other major cities, and incidents of rioters setting police officers on fire. As a result, police officers have not been able to fully exercise their duties, fearing mob attacks. 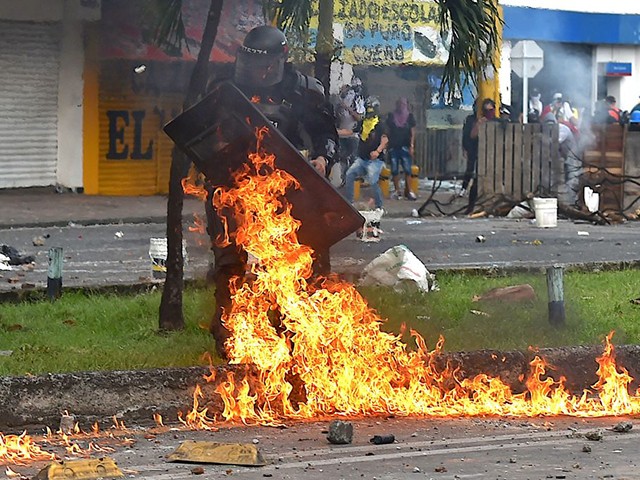 A riot police officer got hit by a Molotov cocktail thrown during clashes with demonstrators protesting against a tax reform bill, in Cali, Colombia, on May 3, 2021. (Luis Robayo/AFP via Getty Images)

Cali, in western Colombia, has suffered much of the worst of the “national strike.” Road blockades have caused shortages of key goods like gasoline – 90 percent of its gasoline stations suffered leftist attacks. In the first half of last week, looting attacks on businesses and police stations prompted civilians to pick up firearms and confront leftist assailants.

A version of that scene appeared to repeat itself on Sunday, when buses carrying hundreds of individuals identifying as indigenous protesters rode into the metropolitan area. According to the Colombian newspaper El Tiempo, the indigenous group organizing the event was seeking to participate in the “national strike” and began blocking a major highway, outraging locals. Some among them also reportedly began attacking local condominium complexes. Amid the chaos, groups of armed civilians emerged to protect the neighborhood, in the town of Jamundí.

“According to reports, the violent events began right in the middle of the Panamericana [highway] … citizens argued with the indigenous people and some civilians brought out machetes. Then, indigenous people blocked the road with a double-decker bus,” El Tiempo relayed. The buses were reportedly on their way to Cali proper. The machete threats escalated to gunshots, which most Colombian sources agree were fired by locals against the indigenous protesters. The gunfire reportedly triggered an outraged backlash on the part of the protesters, who began attacking vehicles and residences in the area. Police reported the burning of at least two trucks and significant damage to several other vehicles, including some with people inside them who were simply attempting to drive on the Panamericana.

El Tiempo reported that, as of press time Monday, authorities identified ten injured people, eight of them among the indigenous protesters.

Cali Metropolitan Police accused the indigenous group of “inciting terrorism” by attacking residences and confirmed reports of overturned and burned vehicles. Colombian media outlets published several videos late Sunday and on Monday, apparently taken via drone, that shows large groups of protesters apparently burglarizing residences and attacking people in their homes shortly before the shooting began. Locals told NTN24, a Venezuelan news network, that the indigenous protesters were “holding us hostage in our own homes.”

“In our unit, we had to park the cars up front to prevent people from getting in, but they threatened the doorman with weapons anyway and they managed to get into the common area,” an unnamed witness in one of the condominiums the mob attacked told Colombia’s El País. “They smashed the windows on several trucks and destroyed the gardens.”

Semana, a Colombian magazine, cited eyewitnesses saying that the indigenous mob was also armed with machetes and sticks and attacking residents attempting to prevent them from blocking the roads. The videos do not indicate the presence of any police officers or law enforcement anywhere in the area.

The Cauca Regional Indigenous Council (CRIC), the indigenous group participating in the incident, issued a statement on Sunday asserting that a “mob escorted by police” attacked their members while transiting through the area.

“We did not attack nor are we the ones here creating disorder by any means,” Giovanny Yule, a CRIC leader, wrote on Twitter. “Some citizens in southern Cali protesting against the national strike and the indigenous minga [a word meaning roughly “collective effort”] and [sic] sought to remove one of the resistance points … they attacked and, when more among their community came to protect them, these shot at [us] with firearms.”

The CRIC insisted those shooting were “police officers dressed as civilians.” It also used its Twitter account to publish videos it claimed proved its side of the story.

The mayor of Cali, Jorge Iván Ospina, urged Duque to travel to Cali and attempt to broker peace personally between citizens and the mob on Sunday. Within Cali city limits, the indigenous community has reportedly not played a significant role in protests. Instead, according to Attorney General Francisco Barbosa Delgado, the protagonists of looting, burning, and other vandalism have been individuals with ties to Marxist terrorist organizations like the Revolutionary Armed Forces of Colombia (FARC). Ospina nonetheless encouraged Duque on Sunday to attempt to negotiate.

“There is an indigenous protest and a citizen strike, it is a political problem of national character what is transpiring in Cali,” Ospina said. “This political problem we inherited in Cali … requires your visit and that of the entire national apparatus to solve the problem through dialogue.”

Duque initially rejected the invite publicly, but reportedly visited the city in the early hours of Monday, between 11:30 p.m. Sunday local time and 3:30 a.m. Monday. Duque used the visit to meet with military leaders, the nation’s Minister of the Interior, and local officials including Ospina.

“Our message and my presence here today is so that, as the supreme commander of the Armed Forces and the Police, we are taking all measures to protect the city of Cali,” Duque said during his visit, “and so that it is absolutely clear that our role is to ensure that the citizens of this city and this department [state] can be calm tomorrow, can regain their tranquility, and that is not possible without an end to blockades.”