Communist Party security forces in Cuba brutally assaulted an Associated Press photographer and several other international journalists attempting to cover protests against the regime on Sunday, leaving them visibly injured.

Beginning Sunday morning, thousands of Cubans spontaneously gathered in at least 20 cities across the island to protest the communist regime, waving American flags and chanting “freedom.”

Havana has responded with brutal methods to suppress the demonstrators, using police force and evidently, live rounds, the discharge of which protesters have filmed. Cuban President Miguel Díaz-Canel, Raúl Castro’s public figurehead, called for street “combat” against the agitators in a bellicose Sunday speech.
“We are willing to give our lives. They will have to pass over our corpses if they want to confront the Revolution,” he said. “The order of combat is issued, revolutionaries to the streets.”

The regime’s violent suppression of the demonstrators has spread to journalists documenting their activities. Associated Press (AP) reporter Ramon Espinosa appeared in graphic photos from the Agence France-Presse (AFP) in which Cuban authorities attempt to restrain Espinosa. He was photographing the Havana protests. 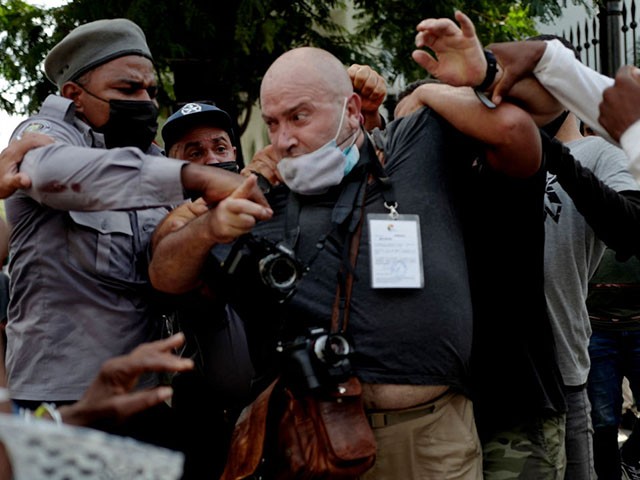 AP photographer, Spanish Ramon Espinosa, is attacked by the police while covering a demonstration against communism in Havana, on July 11, 2021. (ADALBERTO ROQUE/AFP via Getty Images)

Subsequent photos depicted Espinosa, visibly injured, with blood covering his face from his eyes to his chin. Dark lines underscored his left eye and blood trickled from his nostrils, indicating he sustained multiple blows to the head between photos. 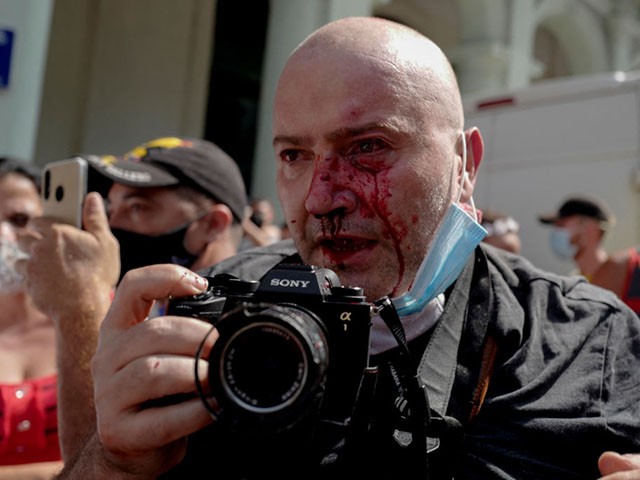 AP photographer, Spanish Ramon Espinosa, is seen with injuries in his face while covering a demonstration against communism in Havana, on July 11, 2021. (ADALBERTO ROQUE/AFP via Getty Images)

Faced with considerable police violence, the demonstrators themselves have begun to speak of armed uprising. Following police gunfire in El Cerro, Havana, on Monday morning, an anonymous Cuban youth told ADN Cuba that unarmed demonstrators are helpless against the communist forces   — “Sin armas somos un pastel para las moscas” — “without weapons, we are a pastry for the flies.”

“We need weapons, something, I don’t know,” he continued. He was nonetheless resolute, saying “we are going to give it all we have!”

Journalists and eyewitnesses in Camagüey, in Cuba’s rural center, saw protesters fight back against police gunfire by throwing rocks and overturning police cars.