NORTH BERGEN, New Jersey – Hundreds, and possibly thousands, of Cuban-Americans have convened for peaceful assemblies nationwide this week in solidarity with their kin on the island, who have flooded the streets of nearly every major Cuban city since Sunday demanding an end to the communist regime.

Cuban-Americans and their allies in New Jersey, New York, Kentucky, Illinois, California, Ohio, and Washington, DC, have organized “free Cuba” rallies meant to encourage Cubans on the island to continue peacefully demanding an end to communism and to urge the government of the United States – particularly the administration of President Joe Biden – to act to protect Cuban lives.

Naturally, however, Florida – home to the nation’s largest Cuban-American population, hosted the largest and most recurring assemblies against communism on the island. Protesters there shut down the Palmetto Expressway, the largest highway connecting the city, on Tuesday, and have maintained a consistent presence at the historic Cuban restaurant Versalles urging an American military intervention in the situation.

In contrast to the overwhelmingly destructive riots in support of left-wing causes last summer, the Cuban freedom movement has organized peaceful protests nationwide, with minimal reports of police activity and no significant property damage.

In response to the protests, the face of the Castro regime, Miguel Díaz-Canel, issued an “order of combat” urging communist vigilantes to violently attack anyone peacefully protesting in their neighborhoods, essentially calling for civil war. The Cuban government shut down internet access nearly nationwide, making it difficult to track police activity, but dissident groups fear hundreds are missing and dozens dead after police began opening fire on crowds of protesters and detaining people in door-to-door raids.

On Tuesday night, hundreds of Cuban-Americans and allies marched on Bergenline Avenue in North Bergen, Guttenberg, and West New York, New Jersey – a historic commercial district largely rebuilt by Cuban refugees in the 1960s and 1970s following its collapse in the post-World War II era. While Hudson County, where these small municipalities are located, has been solidly Democrat strongholds for over a century, Democrat politicians in the area are traditionally vocally anti-communist. The mayors of several local cities attended the rally and pressured Washington to intervene in the violence in Cuba.

New Jersey Cubans, afraid for their loved ones, desperate for change in their home country, take over Bergenline Ave in Hudson County. @MarciRubinN12 is there. @News12NJ pic.twitter.com/EeCNbsOwRB

“We need to see military action,” Mayor Brian Stack of Union City, who also serves as a state senator, told NJ.com. “I believe the United States should’ve been there years ago. Just like we’ve liberated other countries, we should liberate Cuba, make that country free for the Cuban people. Stop all the politics all around.”

Across the Hudson River, Cubans spontaneously organized a rally in Times Square, Manhattan, on Sunday in the immediate aftermath of breaking news of nationwide protests. Protesters continued to inhabit Times Square on Tuesday and are 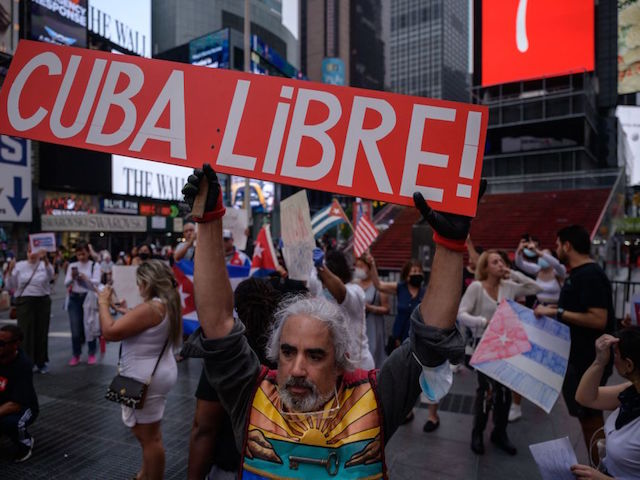 Demonstrators hold placards during a rally held in solidarity with anti-government protests in Cuba, in Times Square, New York on July 13, 2021. (ED JONES/AFP via Getty Images)

Cubans also made their presence known in the nation’s capital, standing outside the White House carrying anti-communist images and posters with slogans calling for freedom. 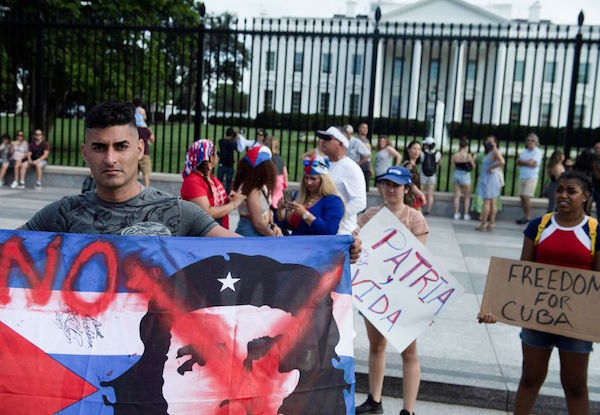 “Tuesday’s organizers tell us this was the largest event they’ve seen in Louisville,” local broadcasters WHAS 11 reported, “beating out nearly 900 people who showed up to Shively Park this past weekend.”

Chicagoans took the streets on Monday for the same cause.

“People have to say ‘enough is enough,’” Alberto Gonzalez, the owner of 90 Miles Cuban Cafe in the city, told local news station WGN. “I lived in Cuba and know what it’s like not to eat for a few days. I left in 1980. I can only imagine today how bad it is.”

One of Los Angeles’ oldest Cuban establishments, Porto’s cafe, hosted a rally on Sunday in solidarity with the cause, as well.

Florida’s protests were the nation’s largest, spanning throughout the panhandle. Hundreds organized a rally in Al Lopez Park, Tampa, on Tuesday, chanting pro-freedom slogans and calling for change. Multiple groups attended the rallies, causing a minor traffic disruption, despite the poor weather.

#ICYMI For the 3rd straight night, Cuban Americans protested in Tampa for freedom in #Cuba. Tampa PD eventually called it an unlawful assembly and ordered them to disperse. 3 people were arrested during the protests. #SOSCubaLibre #SOSCuba #CubaSOS #CubaNoEstaSola #patriayvida pic.twitter.com/sOoqrkqnbY

Miami has essentially experienced non-stop protests attracting likely thousands of people since Sunday. Protesters stormed the Palmetto Expressway on Tuesday and shut it down. 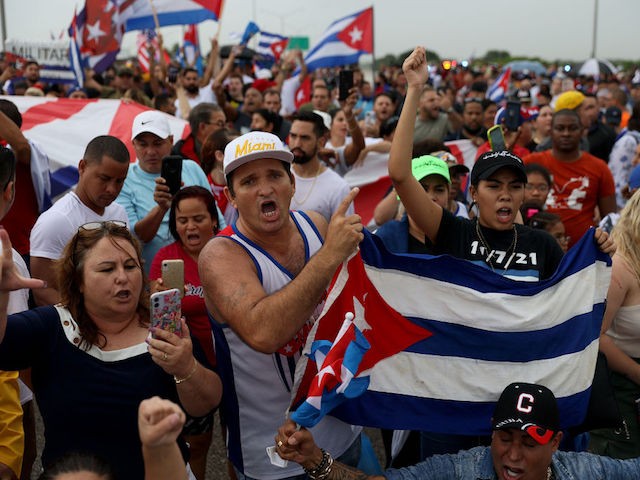 Protesters shut down part of the Palmetto Expressway as they show their support for the people in Cuba that have taken to the streets to protest on July 13, 2021 in Miami, Florida. (Joe Raedle/Getty Images)

The sidewalk outside of Versailles – a restaurant known for its little window (ventanita) where older Cubans congregate to drink coffee and shout about politics – has hosted hundreds of people since Sunday. 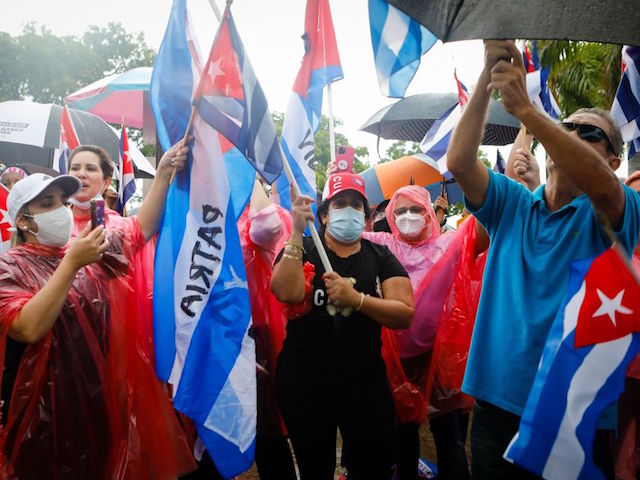 People demonstrate,carrying Cuban national flags, during a protest against the Cuban government at Tamiami Park in Miami, on July 13, 2021. (EVA MARIE UZCATEGUI/AFP via Getty Images)

The Tamiami Park event on Tuesday also commemorated the 27-year anniversary of the March 13 tugboat massacre, in which the Cuban communist regime drowned 37 people in international waters attempting to flee the country. The group was unarmed and included several toddlers. The youngest victim was a six-month-old girl.

“We’re commemorating one massacre now, and we’re trying to prevent another one,” Orlando Gutiérrez-Boronat, the head of the Assembly of the Cuban Resistance, told WPLG Local 10.