Reserve Division General Rubén Martínez Puente on Sunday became the third Cuban general on the island to die since the July 11 protests. Like his predecessors, the communist regime did not specify a cause of death.

Martínez’s death followed that of Reserve Brigade General Marcelo Verdecia last week and the head of the Eastern Army of Cuba, Division General Agustín Peña, a weekend ago. The short timeframe in which three high-ranking members of the Cuban military, which controls both the security apparatus and the economy of the island, have passed since nationwide protests erupted in mid-July has raised concerns about the stability of the regime and, potentially, the impact of the nation’s ongoing battle with Chinese coronavirus.

Martínez was 79 years old at the time of his death on Sunday. The Revolutionary Armed Forces (FAR) of Cuba confirmed his death in a brief note on Sunday that featured some biographical background with no explanation for his demise. The FAR noted that Martínez joined the communist revolution in 1958 and served under current Castro crime family head Raúl Castro. Martínez, like many top soldiers in the current military, served in Cuba’s imperialist invasion of Angola. He also served as the head of the Cuban air force in San Antonio de los Baños, the city believed to be where the July 11 protests began. The statement did not clarify what role, if any, he still played in military operations.

Independent Cuban media outlets noted that Martínez is widely believed to be the general who issued the order to kill four American citizens in the 1996 Brothers to the Rescue murders. Brothers to the Rescue was an American humanitarian aid organization founded in response to Fidel Castro amending Cuban policy to allow Cubans to leave the island on homemade maritime vessels: rafts, inner tubes, modified cars, and other dangerous vehicles used to leave the United States. Balseros, or rafters, still attempt to make it across the Straits of Florida to this day, but the 1990s represented a peak in the number of such cases. Brothers to the Rescue pilots organized flights over the Straits to find stranded and drowning rafters and bring them to safety. 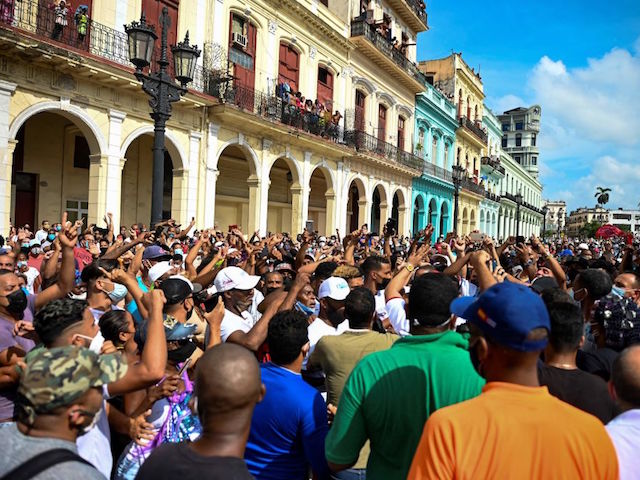 People take part in a demonstration against the government of Cuban President Miguel Diaz-Canel in Havana, on July 11, 2021. Thousands of Cubans took part in rare protests against the communist government, marching and chanting “Down with the dictatorship” and “We want liberty.” (YAMIL LAGE/AFP via Getty Images)

During a flight on February 26, 1996, the Cuban military crossed into international airspace to shoot down four Brothers to the Rescue pilots: the Americans Carlos Costa, Armando Alejandre, Mario de la Peña, and Pablo Morales. General Martínez is widely regarded as having issued the order to kill the pilots. No evidence exists that the pilots had violated Cuban airspace or in any way presented a threat to the Cuban government. The administration of then-President Bill Clinton took no action in response to the killing of U.S. citizens. Only one person received prison time in response to the killings: Gerardo Hernández Nordelo, a spy known as one of the members of the “Cuban Five” responsible for intelligence gathering for Castro in the Cuban-American community.

President Barack Obama pardoned Hernández in 2014 and allowed him to return to Cuba after the U.S. government paid to ship his sperm to Cuba in a successful attempt to have him father a child with his wife in Cuba. Upon his return, the Castro regime hired Hernández to run the Committees for the Defense of the Revolution (CDR), the Communist Party’s national civilian neighborhood spy network.

As of last week, the Castro regime gave Hernández a new job as head of a “popular vigilance” campaign designed to identify and imprison people who participated in the July 11 protests.

Like Martínez, General Verdecia, the second general to die this month, was elderly – believed to be about 80 years old at the time of his death. The Castro regime noted in its obituary that Verdecia joined the Castro rebellion in 1957 at age 16. Peña, the first general pronounced dead, was much younger, dying at age 57. While no evidence clarifying the cause of death for the older generals has surfaced, the Cuban independent outlet 14 y Medio reported that a colleague of Peña’s posted a note on Facebook indicating that Peña died of a Chinese coronavirus infection.

Cuba is currently experiencing one of the most dramatic spikes in coronavirus cases worldwide. The Castro regime has documented 332,968 cases of Chinese coronavirus as of Monday and 2,351 deaths. As of Sunday, however, Saturday broke national records with its number of single-day cases – 8,853 – and ended with 80 coronavirus-related deaths, again the highest ever recorded on the island in one day. Coronavirus statistics have consistently broke Cuban records in the past month, suggesting the pandemic there is worsening.

July 26 is the anniversary of Fidel Castro’s attack on the Moncada Barracks in 1953, the first major terrorist attack he and his communist gang executed. The Communist Party typically holds mass events to celebrate the day and, in light of the protests this month, is expected to organize a major show of force to create the appearance of popular support for the 62-year-old government. Public health experts have repeatedly warned against such events in situations where the Chinese coronavirus is spreading uncontrolled as they may rapidly become “super-spreader” events exacerbating the local epidemic.